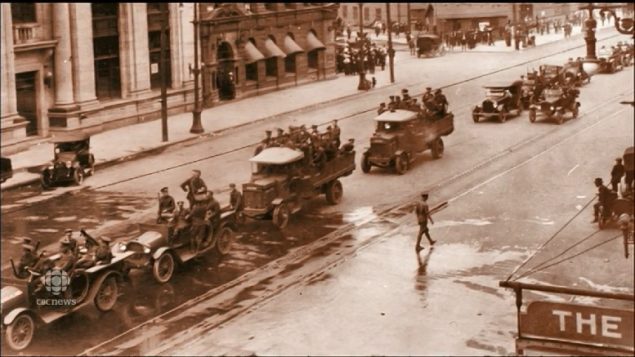 One of the extremely rare times the military occupied a Canadian city. The army is sent in to return order to Winnipeg on Bloody Saturday (via CBC)

Canada history: May 15, 1919 – The labour dispute that shook Canada

For thousands of soldiers who had risked life and limb for their country during the First World War, the return to civilian life was frustrating. Finding a job was difficult with many factories now closed, bankruptcies common, and many of their previous jobs were now filled by someone else. What work there was, was low paid as salaries had stagnated during the war while inflation had risen to staggering levels.

Winnipeg at the time was a very important railway hub, and the third largest city in Canada and dissent had been brewing for months.

What became the largest general strike in Canadian history, began slowly with the breakdown of talks between building trade workers and the employers group. That was followed by a breakdown between metal foundry workers and their employers. Next the 11,000 member labour umbrella group declared it was in favour of a general strike.

The first on strike interestingly enough were female telephone workers who failed to show up for their 7:00 AM shift. 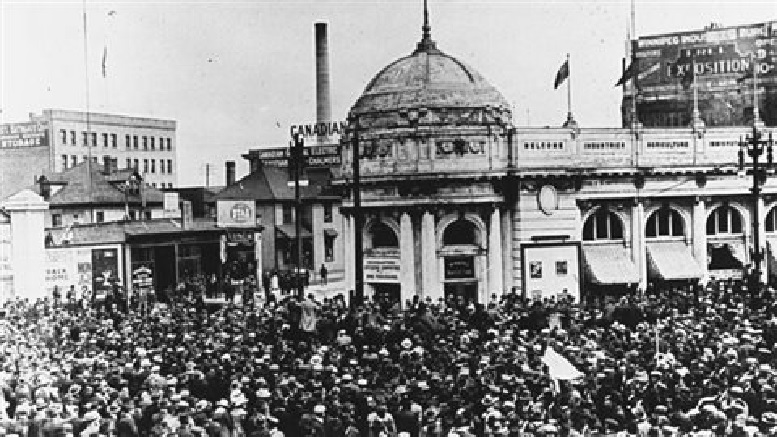 Crowds gather around the Winnipeg Board of Trade Building on June 4. This is the headquarters of business leaders and middle class opposed to the strike. Archives of Manitoba, Winnipeg Strike 7, N12298

Indeed the various cultural, religious, and ethnic divisions in the city were overcome as workers became united for better pay, and conditions, as they technically shut down the city. Key essential services were maintained however.

Police who supported the strike had nonetheless voted to stay on the job, but were all fired a fortnight later for not signing a document saying they would not strike. They were replaced by hired “specials”. 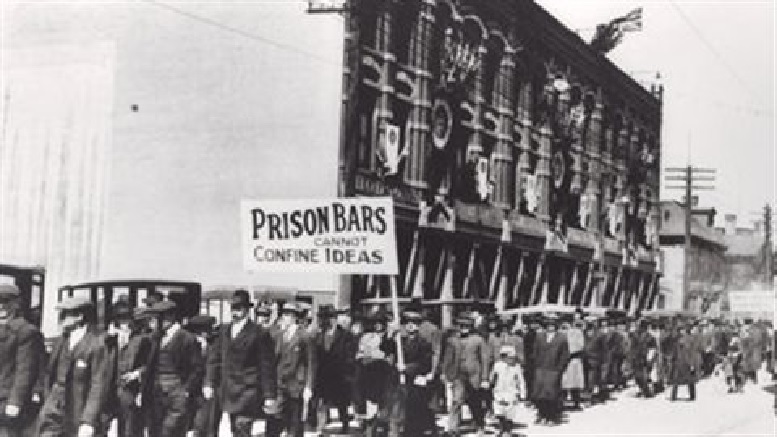 A peaceful protest march following the June 16 arrest of strike leaders. All demonstrations had essentially been peaceful until “specials” and police arrived with intimidation tactics. (National Archives Canada NAC C-37329)

The strike shook the establishment including politicians in Ottawa who were well aware of the Bolshevik revolution in Russia, and were fearful that Bolsheviks might be behind the strike.  However, strikers simply wanted reforms in the system, not to overthrow it.

Other sympathy strikes, are being held in other cities across the country, but are short lived.

The Winnipeg strike dragged on, as tensions grew. By June the mayor declared a ban on marches (parades),  On June 10 a gathering of strikers including women and children supporters turned violent as “specials” on foot and horseback swinging clubs broke up the crowd who responded with thrown bricks and bottles.

A week later, the strike leaders were arrested around the city in surprise raids in an effort to destabilise the strike.

On June 21, another huge gathering, originally a “silent” protest, turned into a riot as the “specials” were sent in. The federal police were called to help and fired on the crowd with guns killing two, while other strikers were chased into an alley and badly beaten. The army was called and  with machine guns set up on trucks restored order. The day became known as “Bloody Saturday”. 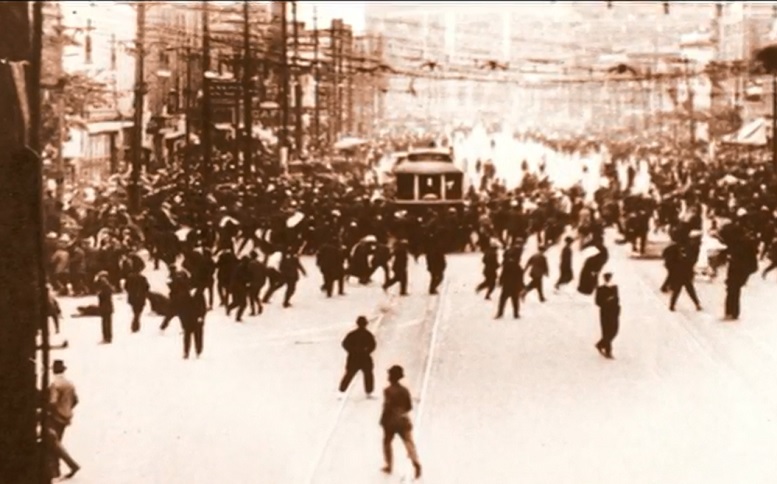 A silent march on June 21 turns deadly when the city sends a streetcar into the crowd. This is viewed as deliberate intimidation as the streetcar (tram) workers were strong supporters of the strike, the streetcar is stopped and vandalised as mounted police move in with guns drawn. One man is shot dead, another will die of wounds, The “specials” then wade in with clubs. The day becomes known as “bloody Saturday”. (via CBC)

A few days later, the leadership committee calls an end to the strike for the following day on June 26. They say the struggle will now continue in the political arena.

Though the immediate goals of the strike were not met, a subsequent Royal Commission inquiry noted the business and industry leaders (“capital”) had done well for themselves during the war, while workers conditions became worse. The report said  “If capital does not provide enough to assure labour a contented existence with a full enjoyment of the opportunities of the times for human improvement, then the government might find it necessary to step in and let the state do these things at the expense of capital”.

The CCF went on to become today’s New Democratic Party which although has never acceded to government it nonetheless has for decades played an important role in advancing social reforms in Canada.

The strike itself led to industry-wide unions, and together with the CCF and NDP have led much better conditions we now take for granted, such as universal health care, minimum wage standards, old age pensions, a 40 hour work week general standard, employment insurance, workplace health and safety standards and more all of which in one way or another had their origins in the strike of 100 years ago.