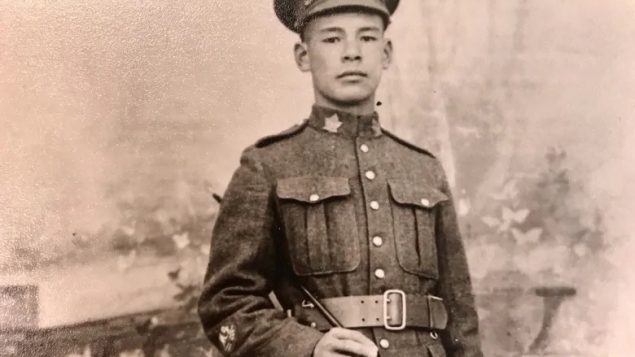 As Canada entered the First World War, anti-Chinese immigrant sentiment was still very strong. In fact neither Chinese immigrants nor their descendants were allowed to become Canadian citizens.

Fred Lee came from a large and relatively successful family in Kamloops British Columbia, but when his father died, the family fell on hard times and his mother took most of his siblings back to China. Fred stayed on.

In spite of the fact he was not allowed Canadian rights such as voting he chose to demonstrate that he was a Canadian by enlisting with the Rocky Mountain Rangers where he was assigned as a machine-gunner, a rather important responsibility and one which demonstrates that even during training he already had earned high regard in the eyes of superiors.

The Rocky Mountain Rangers however were eventually broken up and assigned to other formations, 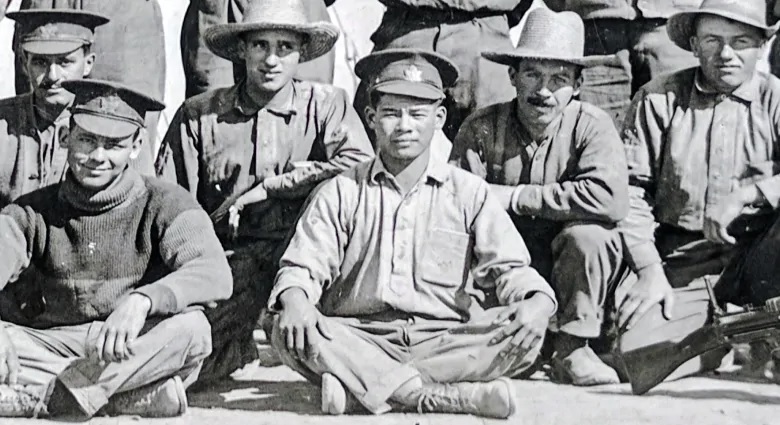 Lee poses for a photo at a camp in Vernon, B.C., with other members of the machine gun section of the 172nd Battalion (Rocky Mountain Ranger Bn in 1916. His position in the front row, with the Lewis gun beside him presumably shows that he was held in high regard or at the very least as an equal by his fellow soldiers (Canadian War Museum)

As for Private Lee, he was sent overseas as a member of the Canadian Expeditionary Force (CEF), where he fought and survived the terrible but largely Canadian victory which was hugely important in terms of Allied morale.

Later he fought in the next Canadian victory at Hill 70, where unfortunately he did not survive, likely killed by a German artillery shell in August 1917.  He is one of almost 20,000 Canadians who have no known grave.

Fred Lee was one of some 300 ethnic Chinese who fought for Canada to show they were proud to be Canadians and in the hope that their sacrifice would lead to acceptance as full Canadian citizens, a process that would however take several more decades.