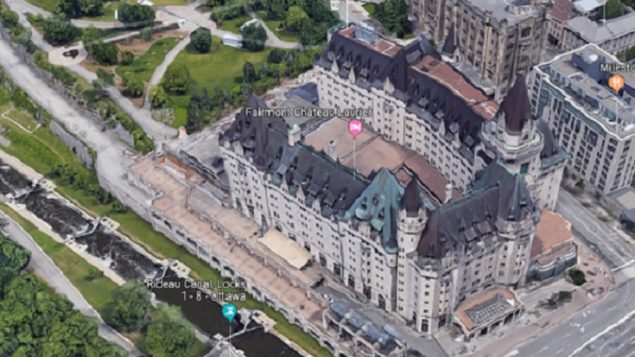 View of the Chateau Laurier with its French castle-like architecture with the public park behind and heritage Rideau Canal beside. (Google)

The iconic Chateau Laurier hotel in Ottawa has been the centre of a heated debate about architecture.

The hotel, is located in the heart of the national capital and since it’s construction in 1912, has been a landmark and focal point located beside the Parliament buildings.

The owners want to build an addition to the hotel but a vast number of critics say the proposed addition clashes with the over 100-year-old French chateau “castle-like” style.

The latest to join the opposition was Canadian born Hollywood actor, director and comedian Tom Green.

Ottawa city council in a final, and last minute, vote yesterday have approved the addition. Many who voted in favour of the addition say their hands are tied because it is a privately owned operation and they have little say in the matter.

Critics say the hotel’s unique architecture, history, and location all make it a case for special consideration. 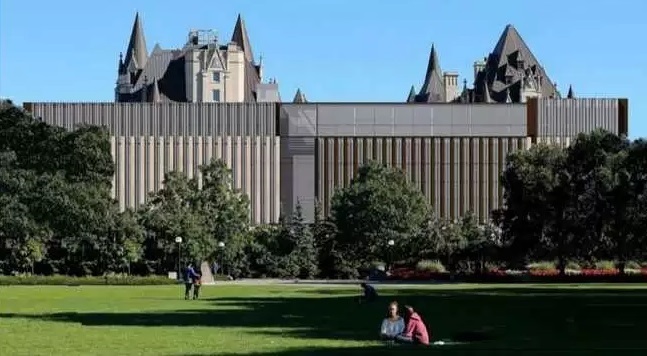 Ottawa architect Barry Padofsky, opposed to the design, created this image of what the final addition will look like and how it would block the view of the iconic hotel when viewed from the park behind- (compare to Tom Green video image)  (illustration-Barry Padolsky Associates Inc Architects)

A letter from Senator Serge Joyal, and famed Montreal architect Phyliss Lambert was sent to Heritage Minister Pablo Rodriquez asking for his intervention and expressing what many have felt about the proposed addition,

“We are deeply concerned that the integrity of the original architecture of the Château Laurier is being destroyed, and that you and the Commission have surrendered and washed your hands of the issue, as if this is happening in some remote backyard”.

The hotel is owned by Amin and Monsoor Lalji through Lalco investments. In light of the opposition, over time they have proposed several alterations to the addition and reduced its height from eleven stories to seven. They say they have met all legal requirements and apparently are not wanting to make further changes. 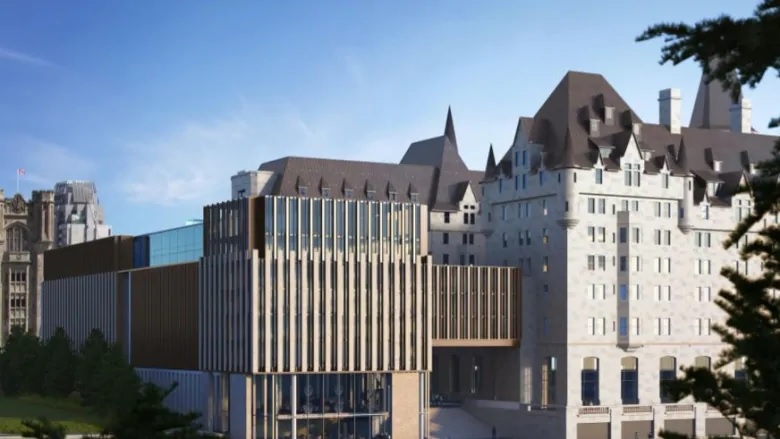 Proposed addition viewed from the west. Critics have compared the design to a “shipping container” or a “radiator” (Larco Investments).

Fight may still not be over.

Now a federal politician has weighed in. Catherine McKenna, the Member of Parliament for Ottawa Centre is asking for reconsideration by the owners. She is also the minister for Parks Canada, which overseas historic properties. She says she’s been contacted by many residents in the city and others across Canada about opposition to the proposed addition and is quoted saying, “”We are building for the next 100 years and I believe there is still time for common sense to prevail and for the community and the private sector owner to come together to achieve an outcome in which everyone can take pride”.

The National Capital Commission (NCC) overseas properties and parks in the capital area including Parliament and Major’s Hill Park directly behind the hotel and will have some say in any landscaping or shadows into the park related to the addition. Both McKenna and the NCC say they would like to work with the owners to come up with a design that would be more acceptable to a wide range of people.

Opponents, including a group called Friends of the Chateau, say they are looking at options which may include launching a legal challenge against the heritage permit allowing the addition.