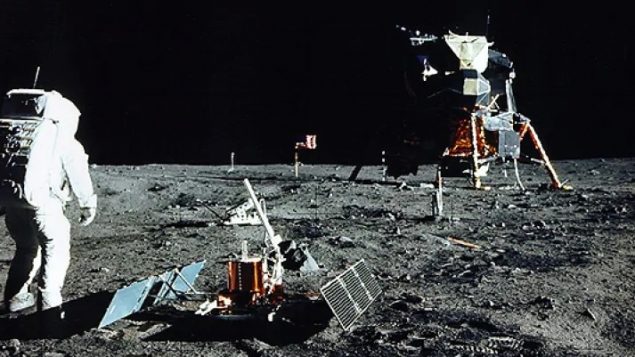 %0 years ago, on July 16, a huge rocket blasted off, destined toward the moon. Four days later July 20, astronauts would land on the lunar surface where they would spend about two hours on the surface on the first day. Shown is Buzz Aldrin unpacking a seismic experiment during the Apollo 11 mission in 1969. (NASA)

50th anniversary of an incredible space feat, and Canada’s role

It was 50 years ago  (July 16) that a huge rocket carrying three exceptionally brave American astronauts blasted off from the Kennedy Space Centre on one of the most daring human endeavours in history.

Four days later, two of them would step out onto the moon’s surface, and all three would later return across space to land safely back on Earth. Canadians played a pivotal role in this astounding effort.

Maurice Bitran (PhD), is an astrophysicist and CEO at the Ontario Science Centre. He describes the moment, the technology at the time and the Canadian role.

It may seem incredible but today’s mobile phones have more capability than the computers at the time that were involved in this amazing feat. Bitran who was a teenager at the time and remembers the landing vividly, says around the world almost everybody knew of the lunar mission attempt. 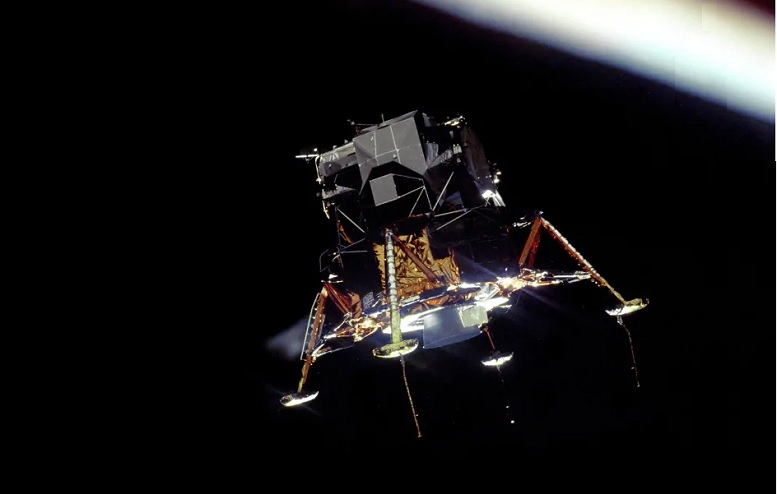 The two stage lunar module. The idea was conceived by a Canadian engineer working for NASA. The legs of the lander were designed and built in Canada so that Canadian “feet” were first on the moon. That section of the lunar module remained on the moon when the “eagle” capsule blasted off to rejoin the orbiting command capsule. “Eagle” would then be jettisoned to crash later somewhere on the surface. (NASA)

Indeed, it is estimated that fully one fifth of the entire world population watched the event a few days later in a live broadcast from the moon as Neil Armstrong became the first human to set foot on the moon. In doing so and in the excitement of the moment he also apparently flubbed the prepared statement which was to be ‘one small step for A man. A giant leap for mankind”.  Even though he left out the “a”, everyone knew what he meant and it has become one of the best known statements in history.

In making this achievement possible, several Canadian engineers and technicians who have been working on Canada’s extremely advanced Avro Arrow jet interceptor, moved to NASA when the Arrow programme was brutally cancelled. Their knowledge and ingenuity in aerospace designs and materials, gained during the development of the Arrow, were instrumental in the success. 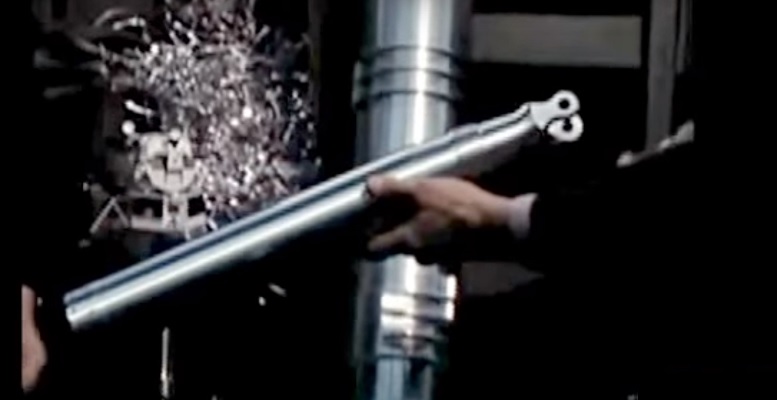 Image from a period report in French from Radio-Canada speaking with the President of Heroux inside the workshop about he design of the Canadian designed lunar landing legs. A tiny model lander is in the background by some metal shavings almost on it, with a full scale leg in the background and holding a smaller piece milled from a solid aluminium billet to a wall thickness of a mere .040-in. for linear strength but extreme weight reduction. (Radio-Canada)

Indeed, it was a Canadian James Chamberlin who proposed the two-vessel concept of an lunar orbiting command module, and a second module that would land and later blast off from the surface to carry two astronauts back up to the command module. Canadian Owen Maynard became chief of systems engineering for the Apollo programme, and it was he who laid out the design for the lunar lander and its two sections. Yet another Canadian helped design the heat shield for the returning command capsule. Although shields had been developed in the Mercury programme, Apollo 11 would re-entering the Earth atmosphere at far greater speed and steeper angle required far greater protection. The flight surgeon was also a Canadian. 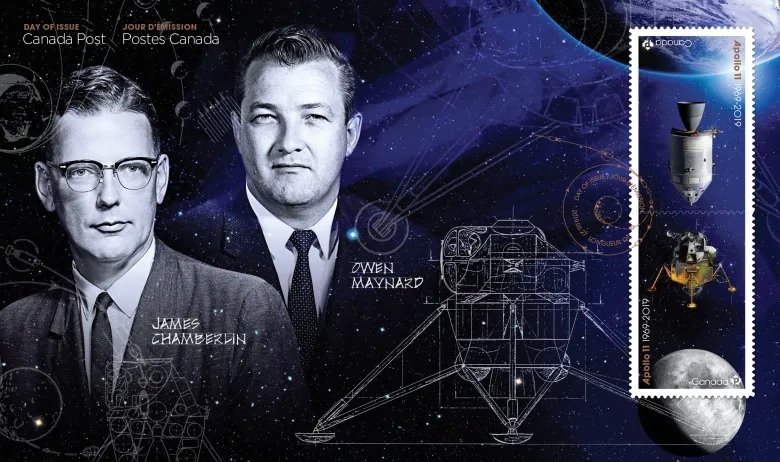 The first day cover of the June 27, release of the Canada Post commemorative stamps honouring both Owen Maynard and James Chamberlin, as well as other Canadian contributions to NASA’s Apollo space program. Interestingly the issue is a “two-stage” stamp, one stamp showing command module and the other stamp of the lunar module (Canada Post)

A Canadian company Heroux Machine Parts Ltd. (now Heroux-DEVTEK) of Quebec won the contract to create the lander legs with an innovative honeycomb design of aluminium to absorb the shock of landing it the surface was hard, and big feet to spread the weight and not sink deeply if the surface was soft (as many suspected).

In a 2010 story in the Truro News,  Robert Godwin, then curator for the Canadian Air and Space Museum in Toronto said , “Canadians contributed a massive amount to the space race and Apollo (…) the Americans benefited greatly from the demise of the Arrow. All of these genius engineers ended up going to help put men on the moon”.

Overall, about 400,000 people were involved in some way with the mission. The scope of the achievement and its success is more remarkable given the very short time delay between the 1961 challenge by then U.S. President Kennedy, and the 1969 mission. 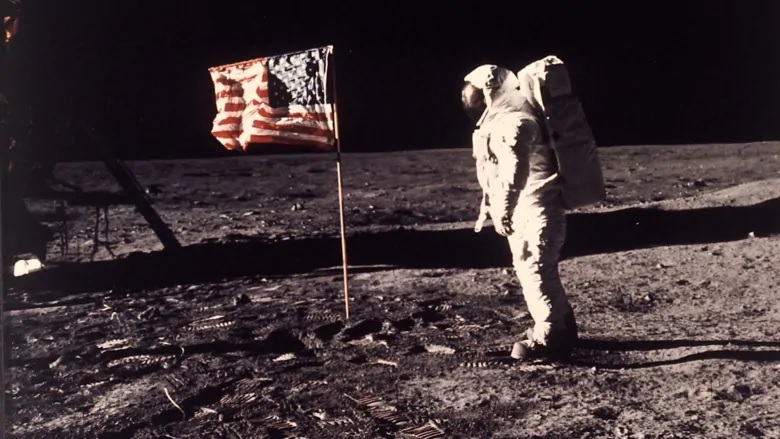 Buzz Aldrin with the U.S. flag planted on the moon’s surface during the Apollo 11 mission on July 20, 1969. Although an American mission with Canadian contribution, many around the world saw it as “humanity’s” accomplishment. (NASA-Associated Press)

In 1989 George H. Bush wanted to send people back to the moon, and ambitious space exploration plans, which never happened, and in 2004, George W Bush wanted Americans back on the moon by 2019. In both cases, the extreme cost was the limiting factor. However, in 1998, the first component of the earth-orbiting International Space Station (ISS) was sent about 400 kilometres above the Earth, with collaboration and costs shared by the U.S, Russia, Canada, Japan and Europe.

Current U.S. plans are to eventually create a space station similar to the ISS, but orbiting the moon about 300,000 kilometres away. This would be used as a base to launch a manned mission to Mars.  Meanwhile the Chinese are planning their own mission to the moon, possibly by 2029.

Bitran says that many museums and science centres in the U.S. Canada, and around the world have plans to mark the occasion in some way. He say the Ontario Science Centre is greatly involved and has a number of events scheduled to celebrate and mark this incredible feat of 50 years ago this week.