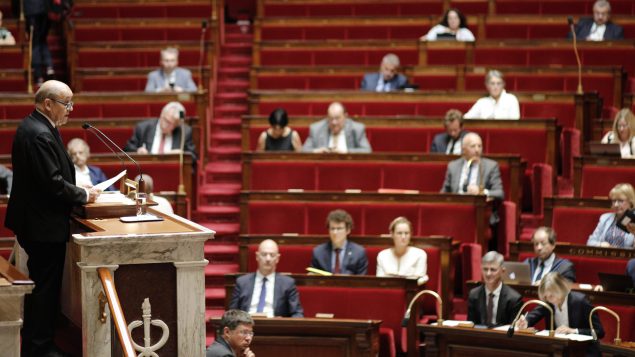 French Foreign Minister Jean-Yves le Drian, left, delivers a speech a debate on the free-trade pact between Canada and with the European Union at the National Assembly, Wednesday, July 17, 2019 in Paris. (Kamil Zihnioglu/AP Photo)

The French parliament delayed until next week a vote on the ratification of a Canada-EU free trade accord just as Prime Minister Justin Trudeau welcomed top EU officials in Montreal Wednesday for a summit that aims to further cement economic and strategic ties between Ottawa and the 28-country bloc.

The Comprehensive Economic and Trade Agreement (CETA) is set to feature prominently in discussions between Trudeau and outgoing European Council President Donald Tusk and European Commission President Jean-Claude Juncker in a series of events in Montreal over the next two days.

CETA will only enter into force fully and definitively, when all 38 EU national and regional governments have ratified the agreement.

Despite enjoying the support French President Emmanuel Macron and his government, CETA has faced staunch opposition in France from both farmers and environmentalists, who argue it puts the country’s food safety and environmental standards at risk by opening markets to greater competition.

French opposition parties both on the left and the far-right oppose the deal.

Yet the French government argues the agreement has already brought huge benefits for France.

Foreign Affairs Minister Jean-Yves Le Drian said Wednesday French exports to Canada have grown by 6.6 per cent since 2017 and trade with Canada has grown by over $585 million (€400 million euros).

Le Drian said fears of cheap Canadian agricultural products flooding the French market have not materialized. For example, only 12 tonnes of Canadian beef was exported to France in 2018 – a market that is estimated to be about 1.7 million tonnes – because of over 7,700 Canadian farms only 36 meet the French standards, Le Drian said.

Canadian imports from France have grown by 21 per cent in the first 18 months after the implementation of the agreement, and by 11 per cent in the agrifood sector, according to Global Affairs Canada.

In April 2018, Trudeau made a direct appeal to French lawmakers in a speech to the National Assembly, the first time a Canadian prime minister addressed that body.

“Let us ask ourselves this question: If France cannot ratify a free-trade agreement with Canada, what country can you imagine doing it with?” Trudeau asked.

Most experts expect CETA to be ratified by the National Assembly, given the large majority enjoyed by Macron’s ruling Republic on the Move party.

A vote in the National Assembly is expected next Tuesday.

It will then be put to a vote in the Senate at an as of yet unspecified date.