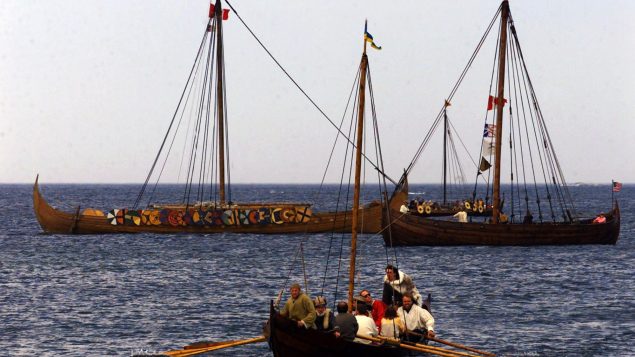 The Vikings might have been in Canada until the 12th century, according to recent research. (Photo of replicas of Viking ships at L'Anse aux Meadows to commemorate the 1000th anniversary of Erikson's historic voyage to North America (Andrew Vaughan/CP PHOTO))

Study reveals Vikings might have stayed in Canada longer than expected

The Vikings or Norses originally came from the Nordic countries but they did not stay there indefinitely. From the 8th to the 11th centuries, they began raiding and trading in parts of Europe, but also in some parts of the North Atlantic.

They established long-term colonies in Iceland, Greenland and what they called Vinland. According to the Nordic sagas, Vinland was a vast country where people, whom the explorers called Skraelings, already lived.

It was not until the 1960s that proof that the Norses arrived in North America was finally found. An archaeological excavation documented the presence of northern cultural material at the L’Anse aux Meadows site on the island of Newfoundland along Canada’s Atlantic coast.

For seven years, archaeologists Helge and Anne Stine Ingstad excavated the site and uncovered a series of Icelandic-style turf structures and a plethora of objects associated with Nordic culture. These included a bronze cloak pin, a spindle whorl made of soapstone and iron rivets typically associated with boats.

Thanks to the radiocarbon associated with these artifacts, researchers were able to establish that the site had been occupied for a short period of time, around the year 1000 AD.

Now, further excavations at L’Anse aux Meadows may suggest that the Norses may have occupied the site longer than expected. Archaeologist Paul M. Ledger directed the research published in the Proceedings of the National Academy of Sciences.

Paul Ledger is a Postdoctoral Fellow at Memorial University of Newfoundland. He explained to us that their findings were unexpected as they were originally looking for something else:

What archaeologists have found exactly are finely laminated layers rich in wood debris, charcoal and other charred plant remains, many of which were not native to North America.

As Ledger explained, what they found is not necessarely Viking, “it’s more likely that this material relay to an Indigenous occupation on the site based on the radio carbondates from the material we got from this layer.”

But what is interesting is that this cultural horizon is where the researchers know that Norses used to be. If archaeologists find evidence that these series of layers that appear to have been trampled by humans or animals come from Vikings, this could be evidence that they stayed longer in North America than we thought.

In the paper, Ledger and his team notes that these “layers of peat may not be as evocative as artifacts such as a ringed bronze pin, or a finely crafted lithic projectile point. Yet, they present new horizons for examining the environmental legacies of inter- and intracontinental movement of people within North America prior to 1492.”

The archaeologist told us a little more about what we know of the Viking presence before Christopher Columbus’ arrival:

Photo of Linus Girdland-Flink and Paul Ledger draining the excavation with a bilge pump (Image courtesy of Véronique Forbes).

What were the Norse doing in North America?

We know for a fact that Vikings lived in Canada, but why did they come here and what did they do? This is a question we asked Paul Ledger:

Now, the team is planning on going back to L’Anse aux Meadows with students from Memorial University of Newfoundland and colleagues from the U.K. to do some more excavations. Their goal is to try and find “the extent of this layer they have discovered but also do some geophysics testing to check if we can see this layer in a geophysical analysis,” explains Ledger.

They also plan to reopen an excavation site from the 1970’s “to observe the profiles and the trenches we see, to see if we can see evidence for this layer.”

With files from Forbes