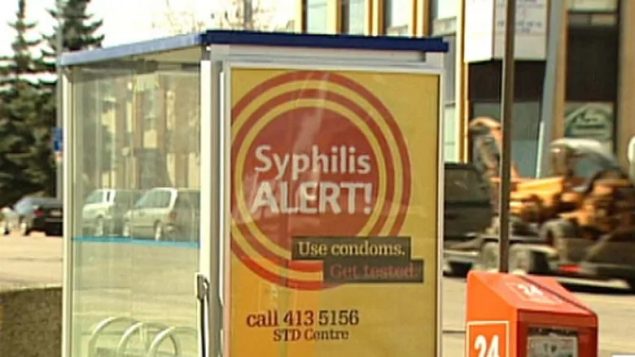 A 2015 poster urges Albertans to get tested for syphilis. Last month, Alberta declared a provincewide outbreak of syphilis, with rates of the STI reaching a level not seen since 1948. (CBC)

New figures compiled by CBC News indicate an “alarming jump” in the rates of sexually-transmitted infections in Canada.

The increases are part of a world-wide trend.

The figures come a little over a year after Ottawa pledged to spend more than $32 million for research into STIs and blood-borne infections, noting that over the previous 10 years in Canada, chlamydia increased by 49 per cent, gonorrhea by 81 per cent and syphilis by 178 per cent.

The CBC figures, published Thursday, show there were more than 126,700 chlamydia infections and 28,300 cases of gonorrhea diagnosed in 2017, the most recent year for which data is available. 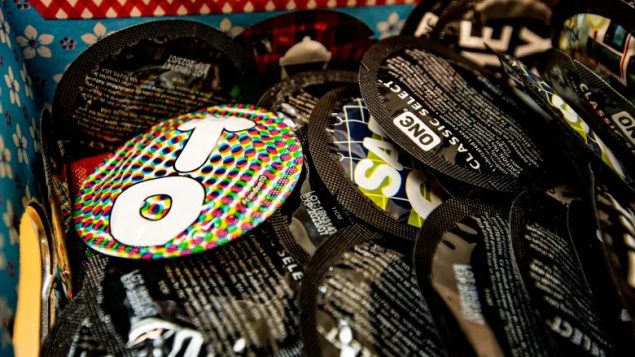 Public health officials across Canada, and around the world, are trying to reinvigorate condom use as the rate of sexually transmitted infections continues to grow. (Craig Chivers/CBC)

At the same time, the number of syphilis cases dropped for the first time in 10 years in 2017–to about 4300, but public health officials say that decline could be short-lived because of recent increases reported in Alberta, Saskatchewan and Manitoba.

The rise corresponds with a decline in the use of condoms, a subject much discussed by reseachers from around the world at the STI & HIV World Congress in Vancouver last month.

In the leadup to the conference, Nathan Lachowsky, assistant professor in the School of Public Health and Social Policy at the University of Victoria, one of several Canadian researchers who presented his work at the congress, said condom use has been declining among the general population and LGBT men for years, and researchers are still working to determine why. 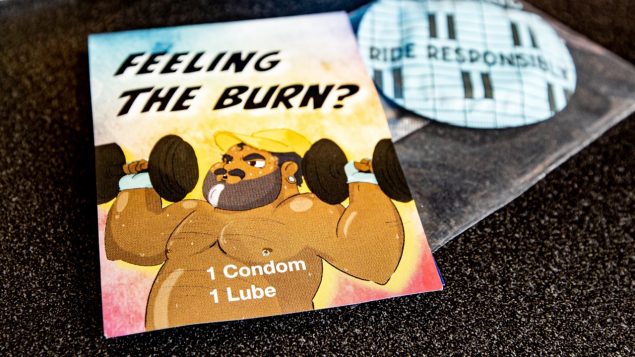 Condomless sex is the main souce of the spread of sexually transmitted infections. (Craig Chivers/CBC)

“Condoms are a tool for prevention that we’ve had for a long time and we’ve actually gotten better in terms of making them more comfortable.”

Kristen Gilbert, education director at Options for Sexual Health, says young people today are just as afraid about getting STI as they were 30 years ago.

“The argument that kids these days aren’t scared enough doesn’t compute for me as why they’re using condoms less,” Gilbert told the CBC’s Zeidler.

Gilbert told Ziedler the key to fighting sexually transmitted infections is to provide people with comprehensive sexual education that includes teaching how to choose the right kind of condoms and how to use them effectively.

With files from CBC, Government of Canada, World Health Organization