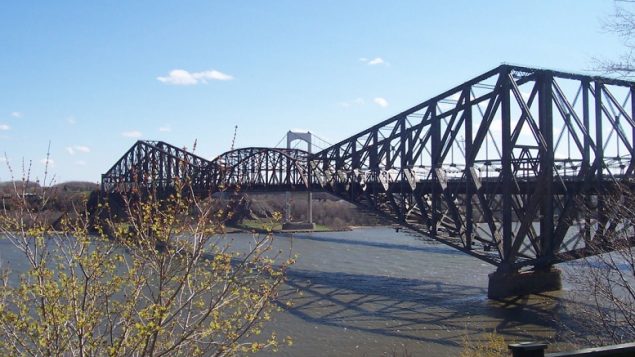 The Quebec Bridge shown in 2006, still considered a marvel of engineering and declared a National Historic Site in 1995, but with a tragic history. (wiki commons)

It was, and still is, the longest cantilever bridge in the world but one with a tragic history.

The Quebec Bridge at 987 metres long (3,238 ft) spans the St. Lawrence river between the south shore city of Levis and Quebec City. Conceived in the latter years of the 19th century, it would collapse twice, cost dozens of lives, and only be completed almost two decades after it was begun. 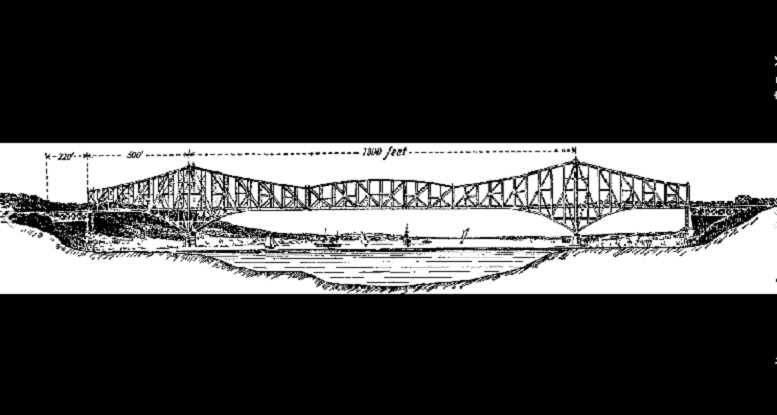 The original chief engineer of the entire project had never worked on such a long cantilever structure and one of the original additional engineers was later replaced over his opposition to the calculation submitted by contractors. After another engineer, the chief engineer of the Department of Railways was demoted ,by 1903 American consulting engineer Theodore Cooper ended up in complete charge of the project, but chose to work from his New York City office.

Apparently the original figures were never properly checked, and Cooper later moved the support piers closer to shore where the river is shallower which would save time and money. This however would lengthen the centre distance between the piers by about 200 feet and was ordered, apparently though without revising the various weight and load-bearing calculations. The dead weight of the centre span was later determined to have exceeded the load bearing capacity of the bridge.

By early 1907 the bridge was nearing completion when a site engineer noted distortions in key structural parts and warned Cooper by letter. The bridge building firm claimed the parts must have been distorted before they were added and proceeded with work. The engineer however seeing the distortion increasing as construction continued, went personally to New York City to advise Cooper, who had initially said the problem was minor. 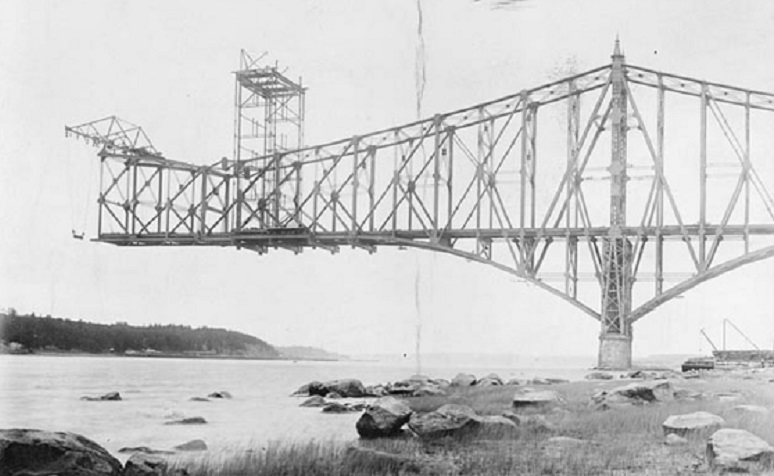 The southern half in 1907. Design miscalculations put excess stress on critical supports which had begun to distort in August as construction continued outward, adding more stress. (LAC MIKAN no. 3258775)

With the site engineer’s insistence, on August 29, Cooper telegraphed the bridge company head office telling them to immediately halt all work, but the message seemed not to have reached the construction site in Quebec in time.

Near the end of the afternoon shift that very day, the entire southern half with the added partially built centre section came crashing down in seconds killing 75 of the 86 workers on shift, injuring those not killed. 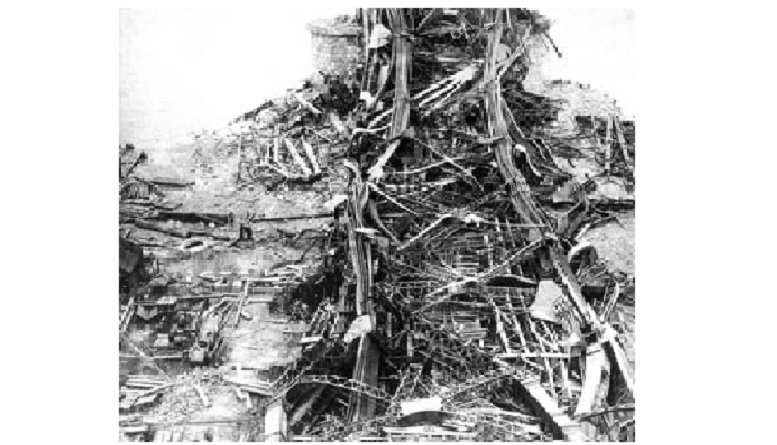 An inquiry was struck which blamed Cooper and the Phoenix Bridge Company engineer, although both seemed to have escaped jail time. 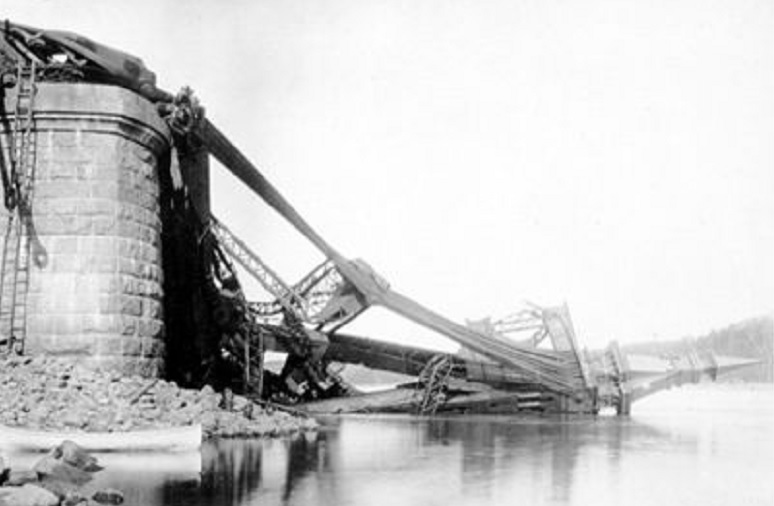 Another view of the collapsed structure extending out into the river. It would take two years to clear the wreckage. (LAC- PA 109498)

Construction on a reinforced bridge began almost immediately, first with the long process of clearing away the tons of wreckage. But the bridge’s tragic legacy was not over.

Nearing completion In September 1916 an attempt to lift the centre section into place failed as it fell into the river killing 13 more. 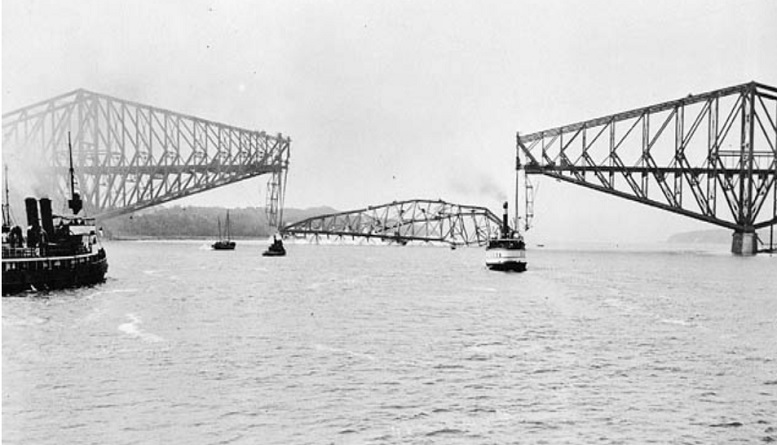 The original plan was to build outward and have the two sections meet in the middle. The rebuilt bridge instead would have a prefabricated middle section floated underneath and raised into place. A materials failure led to the middle section crashing back down into the river caught here at the exact moment the twisted frame hits the water at 10:50 AM Sept 11. 1916 (Chesterfield and McLaren -LAC- PA 109498)

A new centre section was made, floated into place and stronger redesigned fixtures finally raised it into place. The bridge was finally completed in 1919. 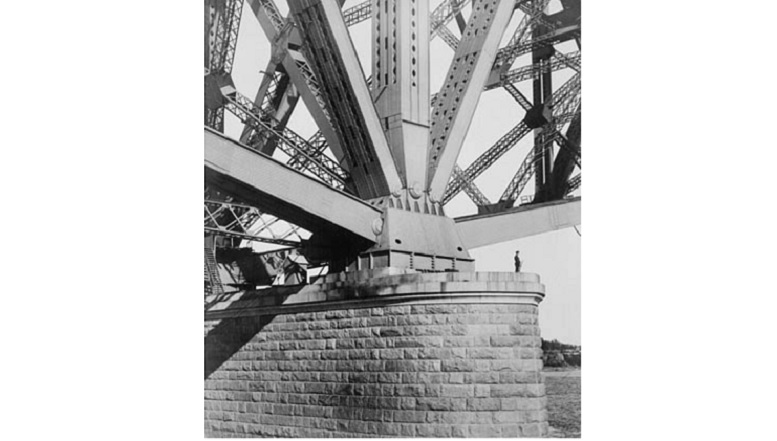 Still under construction, a military guard standing on the north pier of the Quebec Bridge, Quebec, 6 July 1916 gives an idea of scale. Guards were stationed against possible sabotage as the First World War raged. (E.M.Finn- LAC PA-135835)