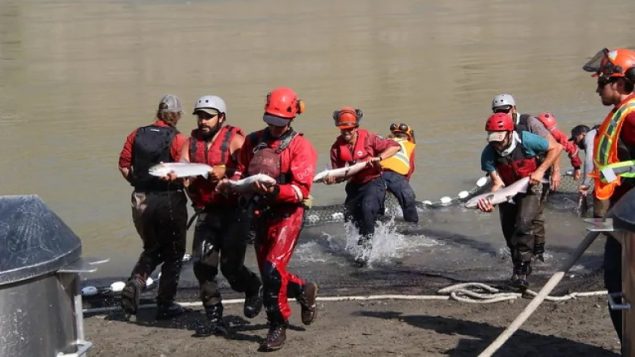 Crews work to move fish into oxygenated transfer tanks in late August. On Wednesday, officials announced they were halting helicopter operations to carry sockeye and chinook salmon past a landslide in B.C.'s Fraser River that was preventing from the fish from reaching their spawing areas because thousands are now getting through. (Province of British Columbia )

A ray of hope in the battle to save trapped B.C. salmon

Two months after hundreds of thousands of salmon were trapped by a landslide on the Fraser River near Lillooet, British Columbia, officials announced Wednesday they have temporarily suspended helicopter transfer operatons because thousands of sockeye and chinook salmon are successfully negotiating their way past the obstacles created by the landslide.

Efforts to rescue the trapped fish have included moving the fish upstream via helicopter, construction of a road along the river to transport the fish by truck, and controlled blasts to remove the rocks,

Rescue operation also include what contractors call a “fish wheel,” device akin to a water wheel with buckets that dip into the water to catch fish. 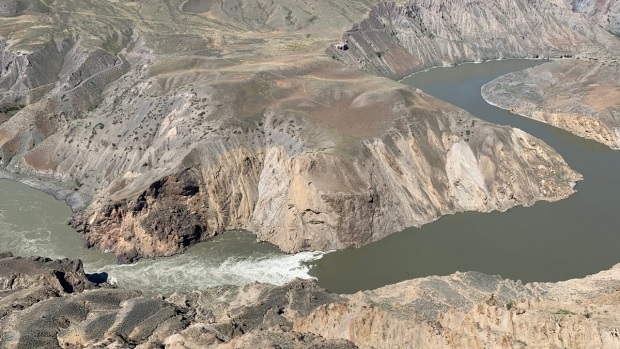 A view of the what was once a free passage for salmon in the region. (Ministry of Forests, Lands, Natural Resource Operations and Rural Development)

“Just think of a wagon wheel going through water, and it has some buckets and as it goes down to the water it will catch fish.”

Officials say they plan to focus now on 1.5 pink salmon in the area.

Pink salmon lack the size and swimming speed as the other species to–at least so far–make it past the landslide to continue their journey upstream to their spawning areas. 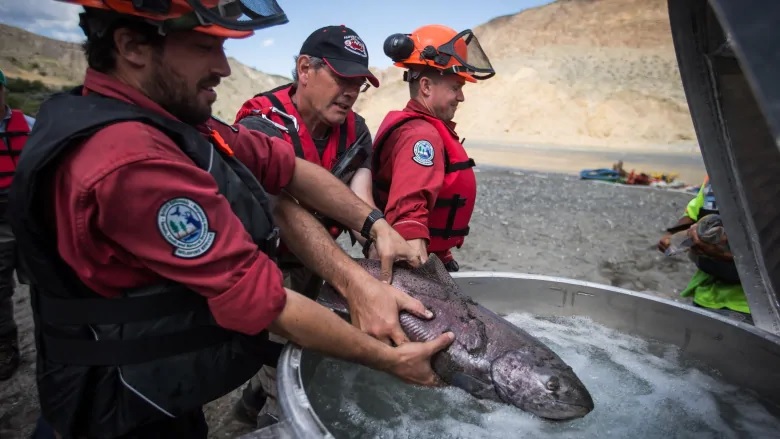 A crew from Fisheries and Oceans Canada, and the B.C. Wildfire Service places a salmon in a vessel being used to transport them up the Fraser River with a helicopter, past a rock slide near Clinton, B.C., on July 24. (Darryl Dyck/Canadian Press)

Just over 200 pink salmon were helicoptered past the slide on Wednesday, adding to the 150 that have been transported so far.

Officials from Fisheries and Oceans Canada and the B.C. Wildlife Service say an estimated 28,000 salmon have passed the slide on their own.

Another nearly 57,000 have been transported by helicopter. 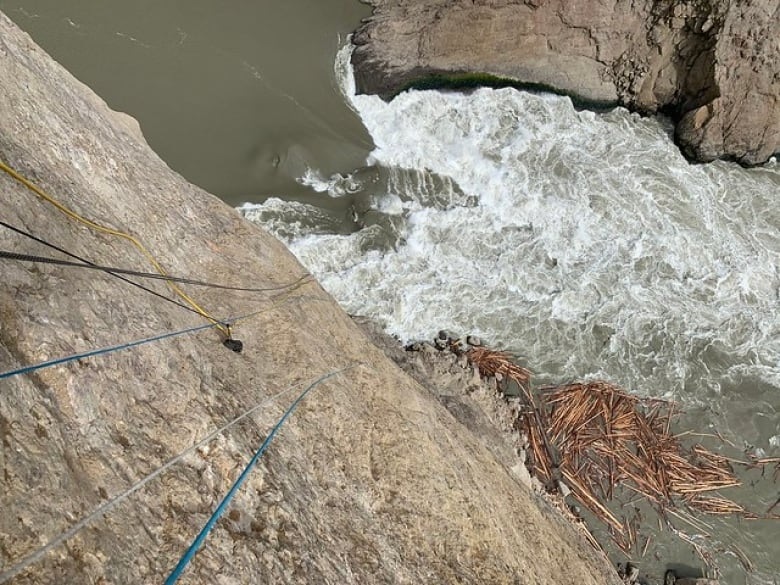 The view from the rock-scalers worksite at the Fraser River slide. (Province of British Columbia )

They also say the sockeye run this year is extremely low, with only about 630,000 expected to return, compared with the pre-season median forecast of 4.8 million.

Work to clear the channels is extremely difficult to plan long-term because one rock could trigger other rocks to tumble and settle in an unexpected place.

First Nations leader have been playing a prominent role in the operation.