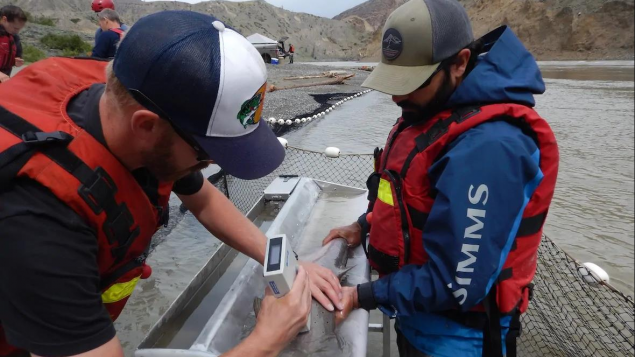 The salmon are tagged so that it can be determined how many make it over the partial blockage from a landslide. (Courtesy of Incident Command Post (ICP)

Salmon will be flown by helicopter after landslide blocked river

Since late June, tens of thousands of migratory salmon have been trapped behind a rock slide on the Fraser River in remote British Columbia. To help them continue their journey, Canadian authorities announced that they would fly them over the barrier by helicopter.

The major landslide was discovered between June 21 and 23. After examining the satellite imagery, data indicate that the slide may have occurred in late October or early November.

It has created a five-metre waterfall that prevents salmon from migrating to spawning grounds, raising concerns about the impacts on these already endangered species.

Many people, including local First Nations and geotechnical engineers, are involved in the project. They are all concerned that if the fish cannot move up the river, there could be a permanent loss of Chinook salmon populations.

The situation is really complex as the land slide occured “in a remote and unstable portion of the river with steep canyon slopes and turbulent, swift-moving water” explains the government of B.C. on its website.

The solution to fly them by helicopter was made public Saturday by Fisheries and Oceans Canada and the B.C. government after weeks of speculation over how to help the trapped fish. 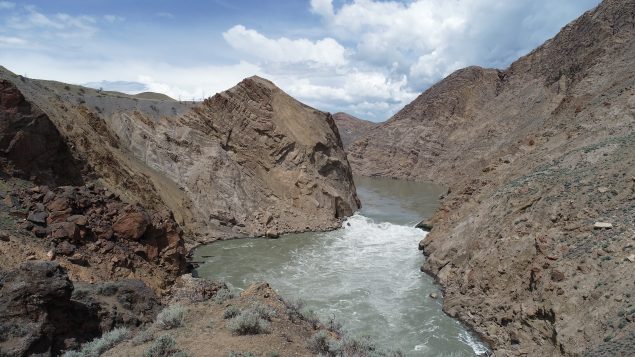 The plan is to build a holding pond along a part of the river south of the slide to gather the fish and transport them.

Authorities hope that once built, the salmon will swim in the channel through a weir.

Thanks to the weir, the fish will be able to enter the pond but will not be able to swim out of it.

Then, they will be transferred into aluminium tanks using nets. The holding tanks will range from 780 litres to 2,700 litres and will be equiped to help oxygenate the water and reduce stress on the salmons. 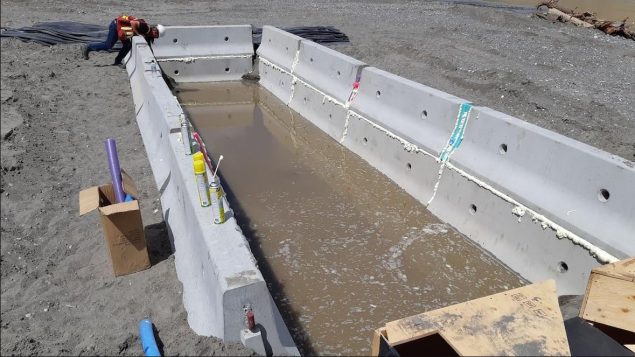 Large tanks are needed as the chinook salmon are the largest of the Pacific salmon species, the world record standing at 57.27 kilograms.

Once in the tank, the fish will take off on their short journey over the landslide. An helicopter will fly the big holding tanks as quickly as possible to not disturb the animals.

Meanwhile, workers tag the salmon to track them and find out how many of them managed to get through the landslide.

Other options will also be used to help the salmon. They are being assessed by the different actors involved in this mission but “action will not be taken until rock stability is confirmed and the river bank directly below where the slide occurred is deemed operable” wrote the B.C. government.

#BigBarLandslide Update: Rock scaling crews are working high on the cliff-side to remove unstable and dangerous rocks from the face of where the landslide took place. https://t.co/KzvXhJqm7b pic.twitter.com/MHgy64PTzf

According to the latest reports, the conditions for carrying out the operation are good.

The water temperature is cooling, which is beneficial for fish and the water level has also decreased. Therefore, there is less debris being carried downstream.

In addition to building a pond, workers on site continue to remove rock and debris to ensure safe working conditions but also prevent another landslide from happening. 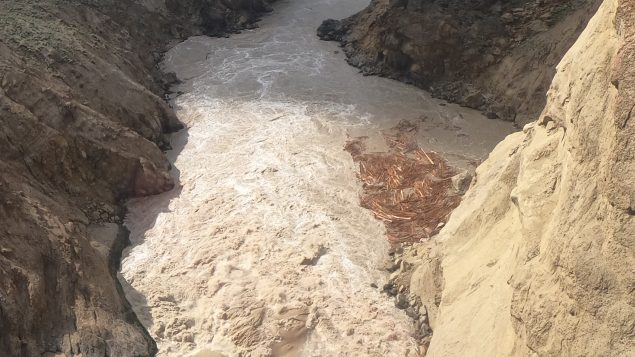 Crews have almost finished clearing rocks and debris from a cliff face that sheared off last month, dumping tons of debris into the river. (/HO-Incident Command Post/THE CANADIAN PRESS)

Chinook salmon is not the only species of salmon that needs to pass through the area. According to the B.C. government species include: Spring/Summer 5-2 Chinook, early Stuart Sockeye, early Summer Sockeye and Summer Run Sockeye.

Chinook Salmon population has been in decline for years in the Fraser river. Of the 13 species, only one is not at risk according to Fisheries and Oceans Canada. If they dissapear, it would have an impact not only for wildlife but also for the local communities.

The loss of these chinook populations would be disastrous not just for wildlife that depend on them as a food source, but also for the many BC communities whose jobs and ways of life depend on chinook salmon.Fisheries and Oceans Canada