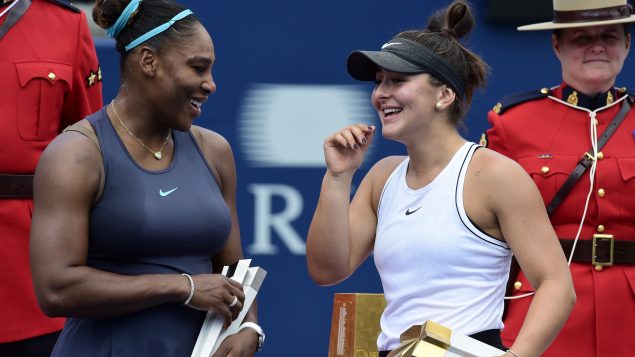 Winner Bianca Andreescu of Canada and runner-up Serena Williams of the USA hold their trophies after Williams had to retire from the final of the Rogers Cup tennis tournament in Toronto on Sunday, Aug. 11. The two will meet again Saturday in the final of the U.S. Open in New York. (Frank Gunn/Canadian Press)

Is Bianca bound for glory in New York? We’ll know on Saturday

The kid did it.

Bianca Andreescu, 19-years-old, from Mississauga, Ontario, is in the finals at the U.S. Open.

A year ago she couldn’t even make it out of the qualifying.

On Saturday afternoon, she gets to play Serena Williams, 37-years-old, from Tennis Heaven.

Andreescu got there Thursday night, coming back in sensational style to defeat one-time phenom Belinda Bencic 7-6(3), 7-5.

Williams, meanwhile, cruised into the final with a 6-3, 6-1 over an outclassed Elina Sviitolina and will have the enormous crowd at Arthur Ashe Stadium on her side as she seeks her 24th Grand Slam title, which would tie her with with Margaret Court Smith for the most all time.

Judging from experience, Andreescu is unlikely to be especially fazed.

Andreescu and Williams met last month in the final of the Rogers Cup in Toronto but only VERY briefly after Williams was forced to retire with injury after four games.

Hugs were exchanged, prompting the somewhat disarmed Williams to describe Andreescu as an “old soul.”

Old Soul or not, Andreescu is an immensely versatile player, who has an enormous heart and an ability to pull herself out of trouble when she loses her concentration, as she sometimes does.

She also has the ability to win when she does not have command of her top form, a characteristic that tends to mark champions.

To this point, nothing has seemed to phase her.

We’ll see how she handles the pressure Saturday in the pit of an enormous arena surrounded by a crowd pulling for her opponent.

So far, she has shown no indication she’ll be overly bothered by any of it.

The insouciance of youth can take you a long way.

Especially when it’s when combined, heart, nerve, verve and talent.

I fully expect her to win.

She really is that good.