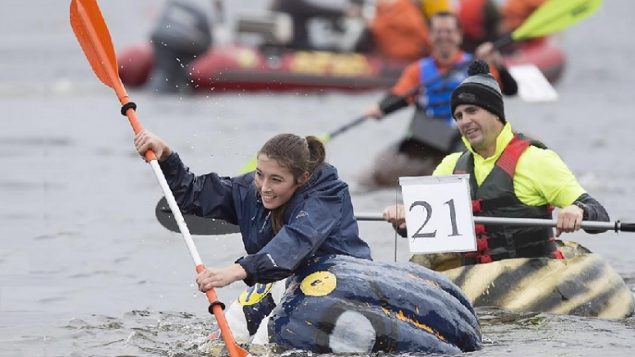 Kaitlyn Enders, one of the locals, races her giant pumpkin in the 19th annual Windsor-West Hants Pumpkin Festival regatta on Lake Pisiquid in Windsor, N.S., on Sunday, October 15, 2017. This year, the 21st such event, will likely not take place. (THE CANADIAN PRESS/Andrew Vaughan)

It’s a hugely popular and hilariously entertaining event, but to great disappointment it looks like it may not happen this year.

This would have been the 21st for the Nova Scotia, pumpkin regatta as part of the Windsor-West Hants Pumpkin Festival.

Every year in October dozens of people climb into giant hollowed out pumpkins, often gaily painted, and try to paddle an 800 metre course in a race across the town’s Lake Pisiquid.

While there are three classes, motor, experimental, and paddle, there are sometimes not enough competitors for the first two, and paddling is the most popular class. 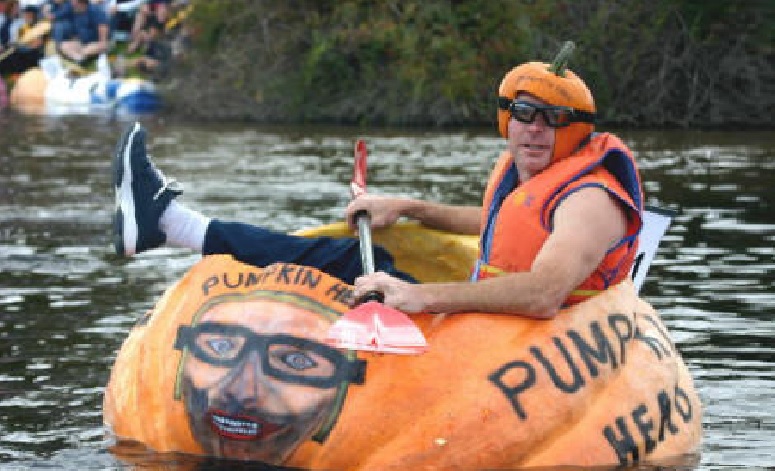 It’s a competition, but mostly just for the fun of it, with the giant vegetable often wildly painted and paddlers sometimes with a pumpkin “safety helmet” (via 2018 Windsor West-Hants Pumpkin Regatta website)

Started in 1999 by Danny Dill, the farmer who grows the “Atlantic Giant” pumpkin variety, the event in Windsor Nova Scotia has grown to attract thousands of spectators and several dozen entrants.

The Nova Scotia event has in fact since inspired similar events in the U.S.  where growing the large squash is just as popular.

For the first time however, the regatta will likely be cancelled. 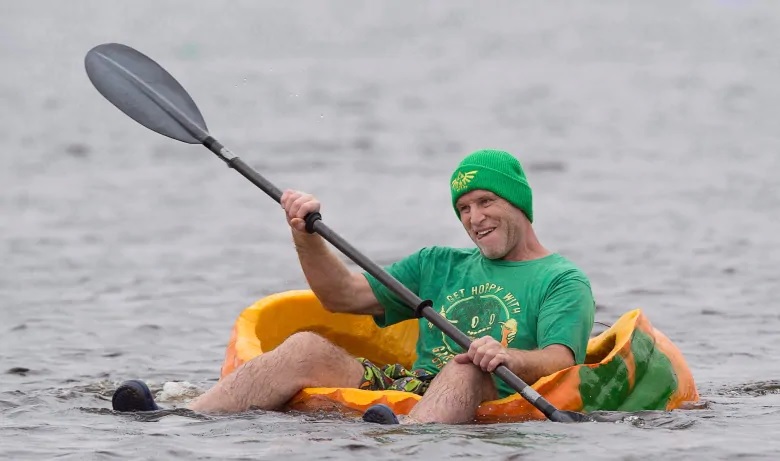 Danny Dill (whose father Howard, developed and patented the giant variety) said the regatta has been the victim of bad weather. First their was a chilly and wet spring which delayed growth and was followed by a hot dry summer further impeding growth. The final blow came with Hurricane Dorian which damaged both the still growing giant pumpkin plants, as well as most of the other regular pumpkin plants in Dill’s fields. 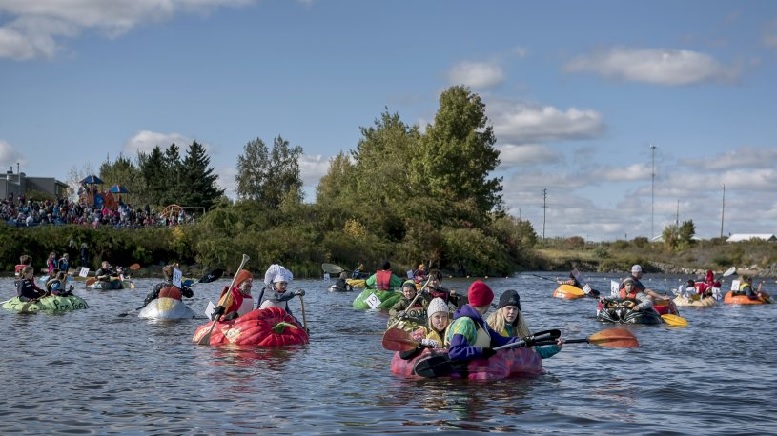 Pumpkin Regatta: the 20th annual event with some two and even three member teams squeezed in the giant gourds competing in Windsor-West Hants on Lake Pisiquid on Sunday, October 14, 2018. About 60 of the giant squash are needed for the event, but there’s such a shortage this year that the event has been cancelled. ( THE CANADIAN PRESS/Darren Calabrese)

The regatta needs about 60 of the giants, typically weighing in at around 380 kg or more, and Dill says there just aren’t enough that are suitable. Dill says while he has a few that would work, most of the giants are only about half the size they should be.

Organisers say a “Plan P” (P for pumpkin)  is in the works however and at least some pumpkins will likely be in the water.  The annual weigh-off competition will proceed on October 5, but it’s doubtful any records will be set.