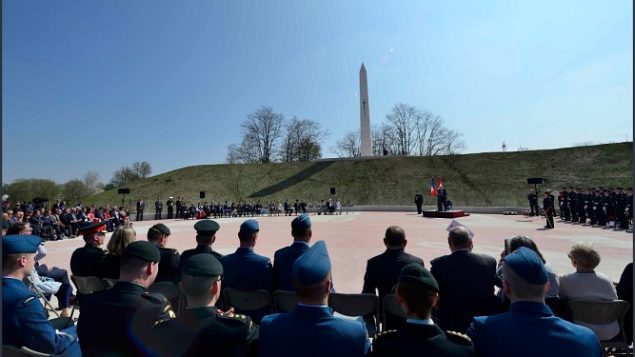 Image of the as yet not completed memorial park and installations on Aug. 22, 2018 during anniversary ceremony of the Aug 1917 battle. The completed site was officially opened to the public in a ceremony on Oct 2. (CBC)

This month, what is very probably the last monument to commemorate the fallen of the First World War, was officially opened in France. 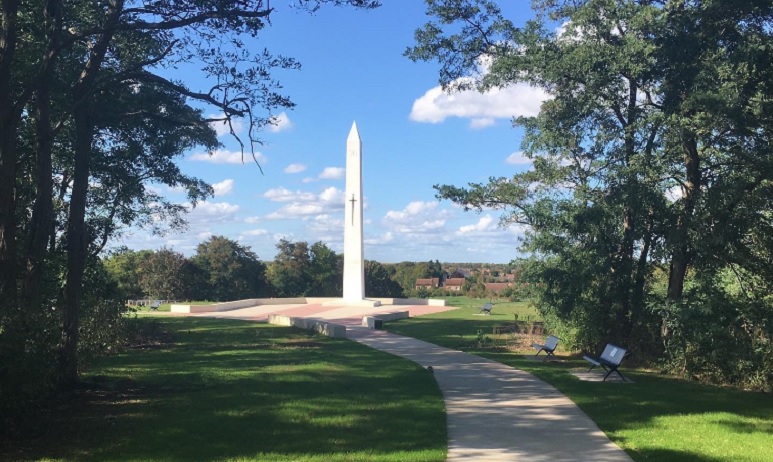 The impressive Hill 70 memorial at Loos-en-Gohelle (near Lens) was officially opened to the public this month commemorating an incredible tactical victory, the first all-Canadian victory which took place in August 1917. 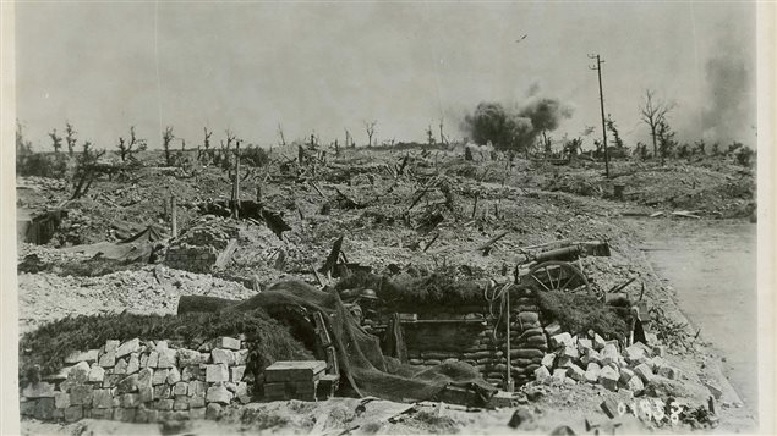 A shell bursts in the distance as a Canadian soldier inspects what appears to be an overrun German gun pit near Hill 70. The partially uncovered wheel and trail of what might be a 21-cm howitzer can be seen, with the wheel of what might be a limber on the far side of the pit. The site has been covered by the Germans with netting likely to conceal it from Allied spotter planes. This amazing all-Canadian victory just months after the mostly Canadian victory at Vimy, was largely forgotten.(Canadian War Museum 19920085-814)

In spite of the major significance of the battle, it seemed all but forgotten after the mostly Canadian victory at Vimy Ridge, and prior to the later bloodbath of Passchendaele.

Indeed although all the major battles of WW-I had long since had some kind of memorial, Hill 70 did not. 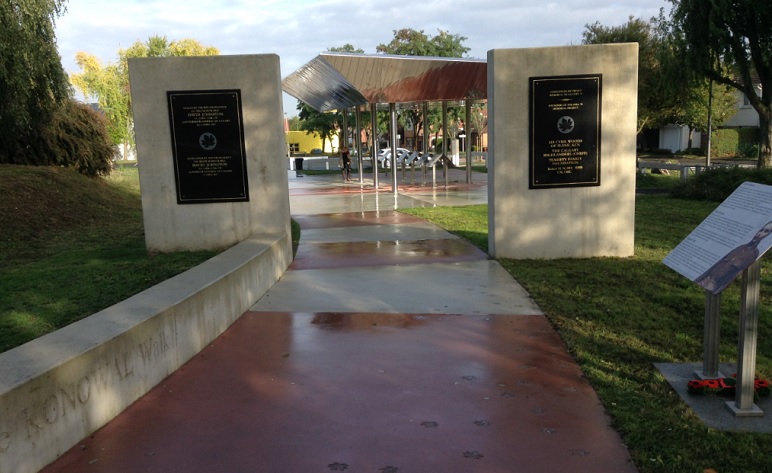 Entrance to the new memorial park near Loos-en-Gohelle, site of the major all-Canadian victory at Hill 70 (courtesy Doug Green)

Retired Canadian Forces Col. Mark Hutchings, decided that this significant historical event and the lives of the several thousand Canadians killed and wounded in taking the high ground above Lens and who fought off 21 counter attacks, needed to be remembered and honoured. 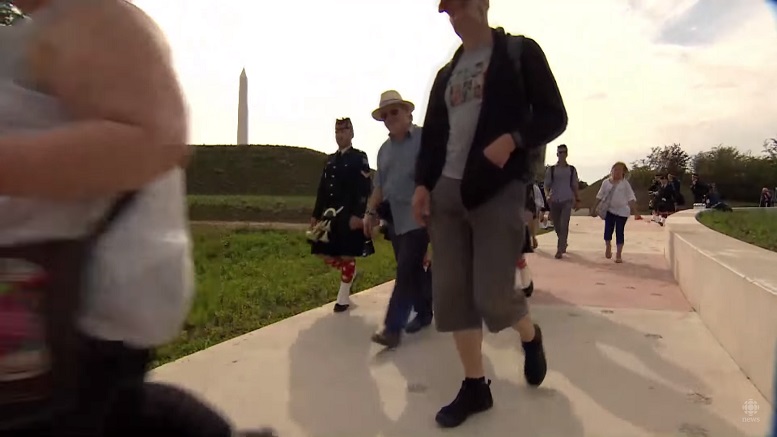 Visitors at the battle anniversary ceremony in August 2018 walk along one of the six pathways at the site, one for each winner of the Victoria Cross and featuring almost 2,000 small maple leaves in counter-relief in the cement, one for each soldier who fell during the 10-day battle (CBC)

In a mere eight years from idea to completion, the impressive obelisk and landscaped park was the result of a small all-volunteer group, and a larger group of professionals who volunteered their expertise as well. 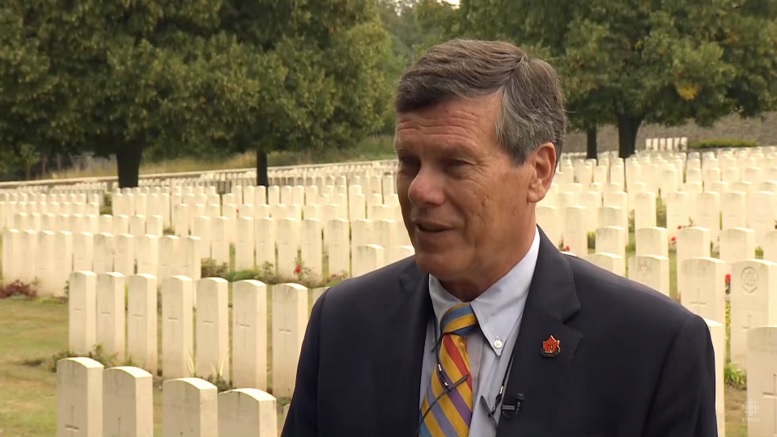 In addition to their valuable donation of time, the approximately eight million dollars to complete the project was also entirely from private donations. 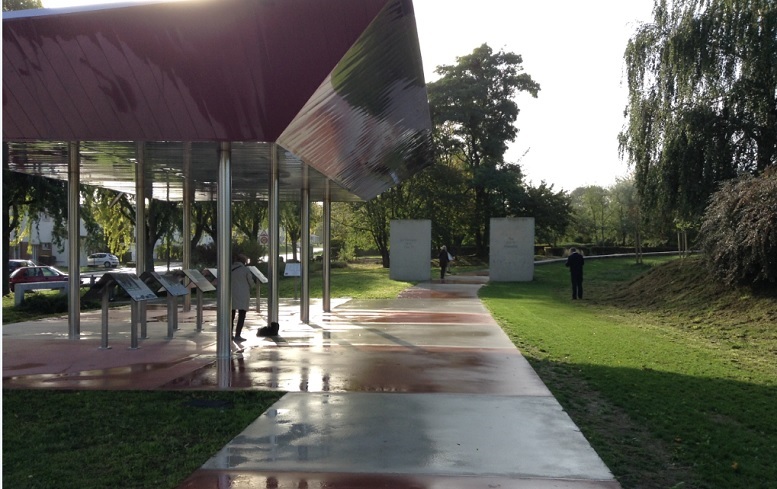 Display area with plaques giving the history and actions of the six Canadians awarded the Victoria Cross, the Commonwealth’s highest honour for valour. Narrated audio stories about individuals who took part in the battle can also be picked up on mobile phones. (courtesy Doug Green) 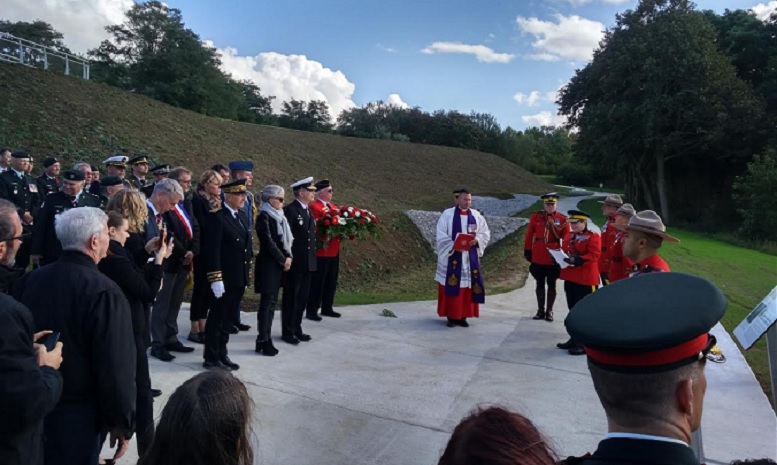 The RCMP Commissioner lays a wreath during the official ceremony his month as dignataries from France and Canada, military officials, and descendants of soldiers who fought at Hill 70 look on. (supplied)

As WWI fighter planes performed a fly  past, many high-ranking political dignitaries and military officials were in attendance, along with several families, and the descendants of soldiers who fought or were killed during the battle. Speaking to reporters, several descendants expressed great satisfaction that this battle was finally being commemorated and honoured.