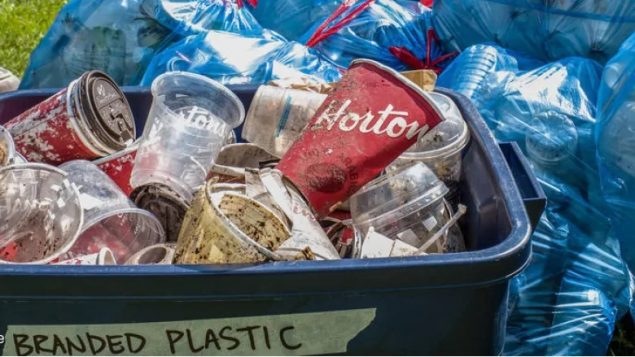 For World Cleanup Day on Sept. 15, Greenpeace co-ordinated a cleanup activity and plastic polluter brand audit in several Canadian cities, including one in Toronto's Don Valley. Nestlé and Tim Hortons were the top two companies responsible for the branded plastic found. (Stan Williams/Greenpeace)

Greenpeace Canada has released this year’s list of companies whose plastic products comprise most litter collected.

There were 240 companies identified in the plastics collected at 9 locations across Canada including Montreal, Toronto, Grimsby  and shorelines along the east and west coasts.

Nestle and Tim Hortons were listed as number one and two for the second year in a row, while Starbucks came in at third place replacing Pepsi which didn’t make the top five list this year, with McDonald’s and Coca Cola in fourth and fifth. 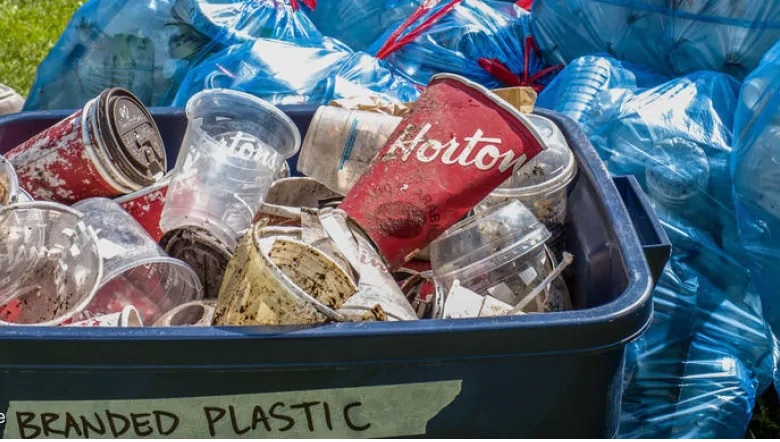 For World Cleanup Day on Sept. 15, Greenpeace co-ordinated a cleanup activity and plastic polluter brand audit in several Canadian cities, including one in Toronto’s Don Valley. Nestlé and Tim Hortons were the top two companies responsible for the branded plastic found. (Stan Williams/Greenpeace)

Sarah King, Head of Greenpeace Canada’s Oceans and Plastics Campaign. “Companies’ responsibility doesn’t end at the point of sale. It’s time these polluters got honest with their customers about the scale of their plastics problem and made a real commitment to solve it through ditching disposables and embracing reuse”. 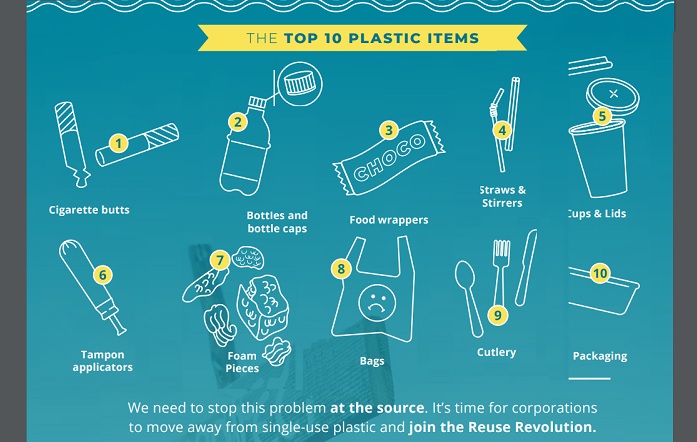 Type of plastic waste found in order of amounts, with cigarette butts as number 1, followed by plastic bottles (Greenpeace)

Some 400 volunteers collected a total of over 13,000 items of plastic litter, with over 1,400 identifiably branded.

The collection included many items that were identified as recyclable.

Bioplastics and bio-based single-use plastic alternatives were found in this year’s cleanups and udits. The items included: paper straws, dog waste bags, paper cups, wood cutlery, plastic bottles containing partial bio-based material, bioplastic cutlery, bioplastic lids, bioplastic straws, bioplastic shopping bags, and compostable take out containers. None of the items were found to be broken down with the exception of some paper products that were starting to break apart.

“Shoreline and community cleanups expose companies’ inaction and their failed attempt at green-washing, We’ve collected everything from bioplastics to paper straws and recyclable lids and bottles, but it’s all still trashing our planet. Replacing single-use plastics with other single-use alternatives is a false solution that perpetuates our broken, disposal-centric business models. We cannot clean and bandaid our way out of this crisis, we need an urgent move away from disposables towards a reuse revolution.” Sarah King Head of Greenpeace Canada’s Oceans and Plastics Campaign. “

Most people may not realize that cigarette butts contain plastic, and these were the most common item found. Plastic bottles, most of which are recyclable continue to be a major pollution item. Food packaging in various forms makes up about half of the plastic litter.

Other plastics items not branded include fishing and aquaculture ropes, nets, bouys and chunks of styrofoam.

The report notes that only 9 per cent of plastic actually gets recycled in Canada, and 86 per cent goes into landfill.

Several of the identified companies have announced plans and policies to reduce their environmental footprint.

Greenpeace says they hope reports like this spur everyone to take action, certainly the federal government and the companies, but also individuals who should make a greater effort to recycle but also to seek alternatives to single use plastics in the first place.