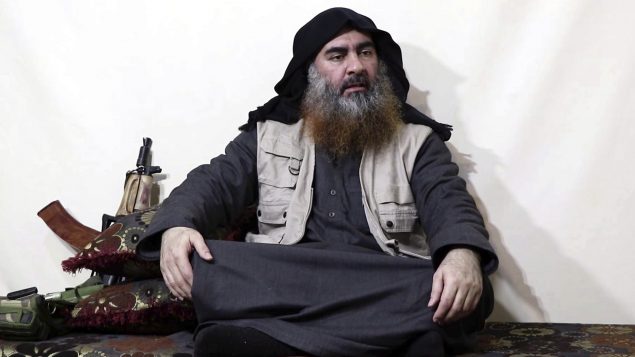 This file image made from video posted on a militant website April 29, 2019, purports to show the leader of the Islamic State group, Abu Bakr al-Baghdadi, being interviewed by his group's Al-Furqan media outlet. (Al-Furqan media via AP)

The Canadian federal government showed no intention of changing the national threat level of its current ” medium ” classification despite concerns from some countries that the Islamic State group may retaliate following the killing of its leader during a U.S. attack.

Trump said that the little-seen leader of the Islamic State of Iraq and the Levant, or ISIL, killed himself and three of his children during the raid.

Prime Minister Justin Trudeau reacted to the news on Twitter saying that al-Baghdadi’s death was an important step in the fight against Daesh.

The death of al-Baghdadi is a major step in the fight against Daesh. Canada will continue to work with our partners to ensure the enduring defeat of Daesh, including through the Global Coalition, Operation IMPACT and the @NATO training mission in Iraq.

Despite fears of retaliation by some Daech supporters around the world, the office of Public Safety Minister Ralph Goodale has indicated that “Canada’s national terrorism threat level” has not been changed. The current level, “moderate”, means that a violent terrorist attack “could occur”; the next level, “high”, would mean that such an attack “is likely to occur”.

Egypt and the Philippines are among those countries that have stepped up security in the wake of al-Baghdadi’s death.

Canada has been involved in the fight against the Islamic State since October 2014. The country has 850 military staff in Iraq and the region, including special forces, military instructors, medical personnel and crews for transport helicopters and aircraft.

The national threat level had risen to ” medium ” in October 2014, when a Daech sympathizer fatally hit Warrant Officer Patrice Vincent in Saint-Jean-sur-Richelieu in retaliation for the deployment Canadian troops and aircraft to fight the extremist group in Iraq.

The next day, another Daech supporter shot Corporal Nathan Cirillo outside the National War Memorial in Ottawa before storming the Parliament building, where he was shot dead by security forces.

RCI with The Canadian Press.