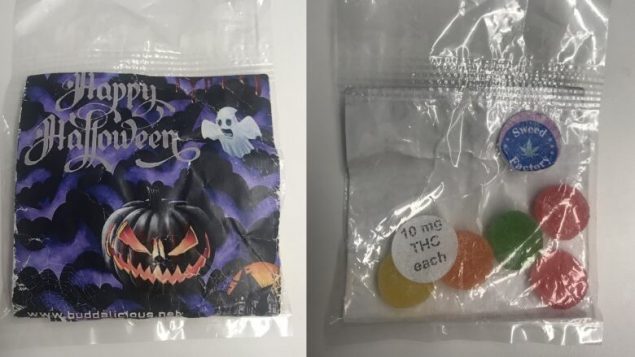 The package contained jujubes that were labelled as being from the "Sweed Factory." A sticker on the package said the candies contained 10 mg of THC, each. (RCMP)

Parents in Nova Scotia discovered an edible cannabis product in the bag of candy their child collected on Halloween.

According to the Royal Canadian Mounted Police (RCMP), parents from Coldbrook, Annapolis Valley, told investigators that their child was part of a small group of eight youth who spent Halloween in the area on Thursday evening.

“We’re having the item analyzed to make sure what is actually in it,” said Cpl. Jennifer Clarke, an RCMP spokeswoman based in Halifax.

Photos of the candy show a front label with the internet address for a mail-order marijuana company on it, while on the back is a round sticker that says “10 mg THC each.” Another round sticker includes a cannabis plant logo.

“I guess that’s the danger with cannabis edibles for us.… There’s really not a lot on the front of the label that would lead me as a parent to be suspicious, other than the fact that the label does look kind of worn. The package looks like it’s maybe been in someone’s pocket or a bag or a purse,” Clarke said.

But if that label were not on the back, I don’t know how a person would know.Jennifer Clarke, RCMP spokeswoman

Parents do not know the origin of the bag since the children visited different homes in Cambridge, Kentville and Coldbrook.

Police say that further investigation confirmed that none of the other children received similar treats.

RCI with The Canadian Press and CBC