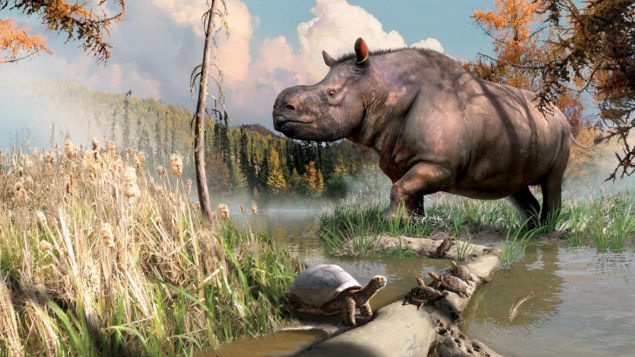 Artistic illustration of a rhino and turtles in their natural environment 8 million years ago. (Julius Csotonyi/ Yukon Government)

The Yukon, a territory located in northwestern Canada, was once home to ancient rhinos and turtles, a recent analysis of fossils discovered in 1973 shows.

8 to 9 million years ago, these rhinos were about two metres high and three metres long. They were certainly among the largest animals living in North America at the time.

The presence of these animals could be explained by a warmer climate, explains Yukon government paleontologist Grant Zazula.

It was probably much more like parts of southern United States, where there are swamps that do not freeze all year round.Grant Zazula, paleontologist 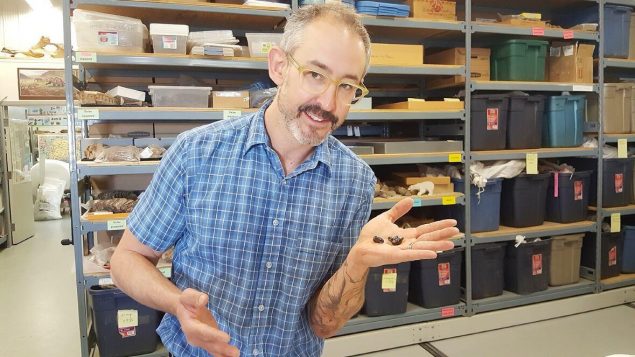 “It must have been quite special, since it was really darker during the winter, which would be a very interesting situation for these animals,” says Grant Zazula.

The fossils were discovered by Joan Hodgins, a 22-year-old teacher at the time who was hiking with her students.

What is interesting with this discovery is that it is the first time paleontologists find evidence of the presence of ancient mammals, such as rhinos, before the Ice Age.

During the Tertiary Period, which began after the extinction of the dinosaurs and ended about 2.6 million years ago, a land bridge connected what is now Siberia and Alaska.

Paleontologists believe that animals of all kinds, including mammoths and rhinos, used to cross this bridge.

Shells similar to those of some Galapagos turtle species have also been correctly identified.

These findings were published in the journal American Museum Novitates.