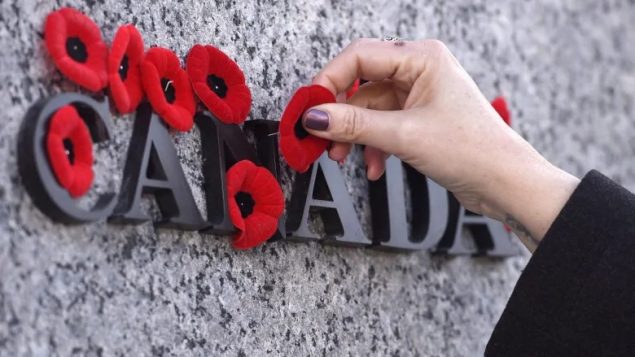 It is a cold and slightly snowy day across much of Canada this November 11th, as it often is on this date in this country.

Regardless of the weather,  Canadians are gathering at cenotaphs, war memorials and community centres across the country to honour Canadian soldiers, sailors and airmen who fell in war, conflict, and peacekeeping and also pay a tribute to those currently in service.

It is a day to pause and reflect on their sacrifice in efforts to preserve freedoms in countries around the world. 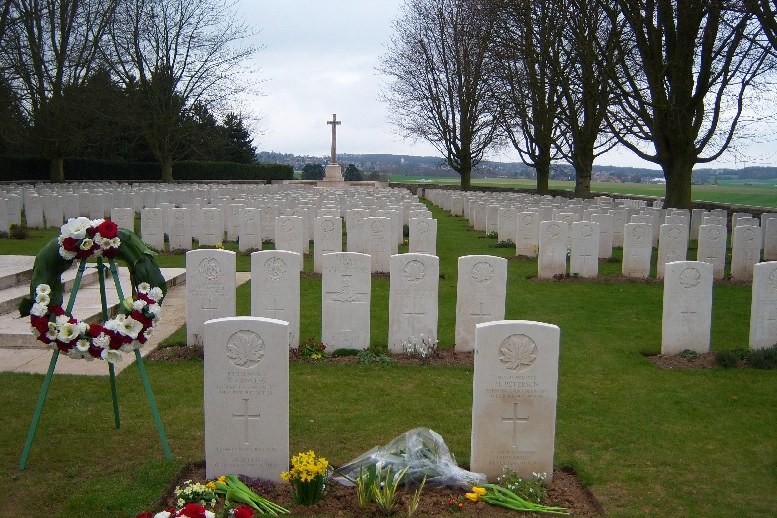 Canadian military cemetery “La Chaudiére”, Pas de Calais. In the foreground the markers of Pte Herbert Peterson, and Pte Thomas Lawless of the 49th Bn Canadian Expeditionary Force of WWI whose remains were found near Avion and identified in 2007 and 2011 respectively (Laurel Clegg- DND)

The main ceremony takes place at Canada’s National War Memorial in Ottawa, which is also the site of the Tomb of the Unknown Soldier whose unidentifiable remains were found on a WWI battlefield and transported to be reburied in Ottawa at the base of the memorial with full military honours in 2000. 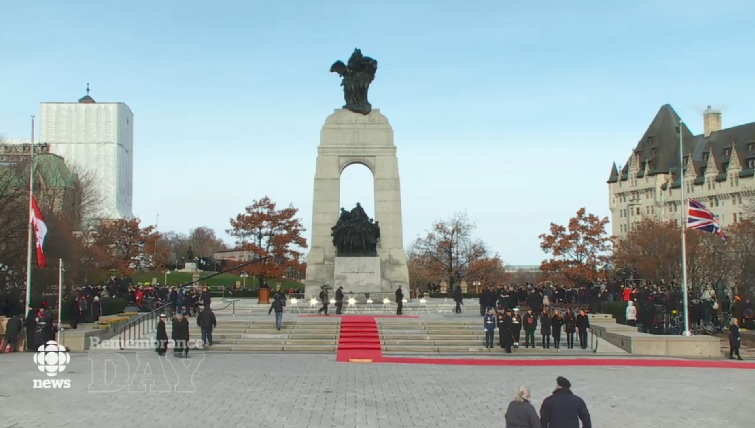 Image of the plaza and National War Memorial, Ottawa at 10 AM this morning. Large crowds have already gathered on the sidelines, dressed in winter clothing against the -5 degree Celsius temperature and slight breeze. This space will soon be completely filled with soldiers of a honour guard, dignitaries, and veterans, several of whom will lay memorial wreaths (CBC)

In Canada, as elsewhere, wreaths will be laid by various services at the foot of cenotaphs. In Ottawa each year a mother is designated as  the “Silver Cross Mother” chosen by the Royal Canadian Legion to lay a wreath at the National War Memorial as representing all mothers who have lost a son or daughter while in service. 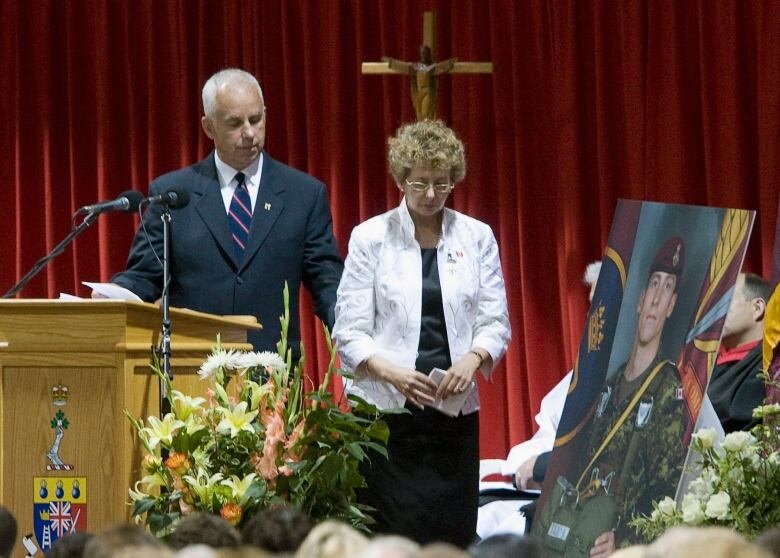 Retired Lt.-Colonel Peter Dawe and his wife Reine walks away from the podium after speaking about their son, Capt. Matthew Dawe, 3Bn PPCLI, killed in Afghanistan in 2007. Reine has been appointed the Silver Cross Mother this year. (Paul Chiasson/The Canadian Press)

This year Reine Samson Dawe of Kingston Ontario is the Silver Cross Mother. Her 27-year-old son, Captain Matthew Dawe was killed by a remotely detonated roadside bomb in Afghanistan in 2007. Five other soldiers and an Afghan interpreter were also killed in the attack.

Dawe left a wife and baby son behind.

Originally known as Armistice Day it was inaugurated by King George V in 1919 who decreed that at the 11th hour of the 11th day of the 11th month, a one or two-minute silence is observed to honour the fallen of that terrible war. The date and time denote the silencing of the guns and coming into effect of the Armistice to end the war. 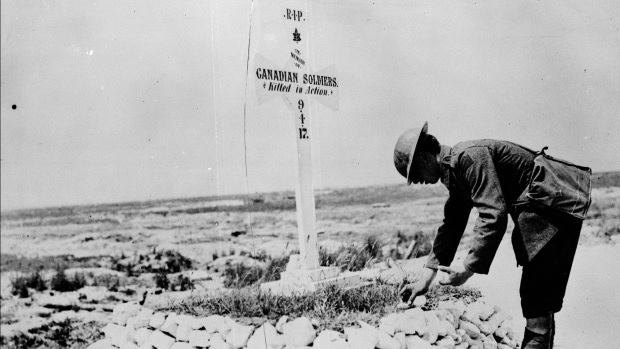 A Canadian soldier in 1917 adds some stones to a cairn near Vimy, France marking the graves of other fallen Canadians. (National Archives Canada)

What many don’t know is that Canada’s forces serving in wars abroad have always been volunteers; a collection of former miners, university students and professors,  bank clerks, lawyers, mechanics, nurses, farmers, etc.

During the services, a portion of a poem written by British poet Laurence Binyon is usually read. The poem For the Fallen was written in the opening year of the First World War to commemorate the fallen of the British Expeditionary Force overcome at the Battle of Mons.

Although comprised of seven stanzas, the fourth stanza is the one almost always recited, although the third is sometimes also included.

3- They went with songs to the battle, they were young, Straight of limb, true of eye, steady and aglow.

They were staunch to the end against odds uncounted, They fell with their faces to the foe.

4- They shall grow not old, as we that are left grow old; Age shall not weary them, nor the years condemn.

At the going down of the sun and in the morning, We will remember them.

Recording of last moments of WWI-

BELOW In WWI -knowing the speed of sound, a new technology of sound recording was used to calculate locations of enemy guns. What is little known is that the war continued up to the very last seconds. as shown by the signal waves before and after 11AM on November 11, 1918.  Listen closely to the end and think of the lines from Col McCrae’s poem In Flanders Fields :” and in the sky the larks, still bravely singing, fly scarce heard amid the guns below” (Imperial War Museum, via Daily Mail.com)

In Canada Armistice Day had been held on the Monday of the week in which November 11th occurred. It became Remembrance Day and changed specifically the actual date of November 11 through an Act of Parliament in 1930, with the first November 11 remembrance in 1931.