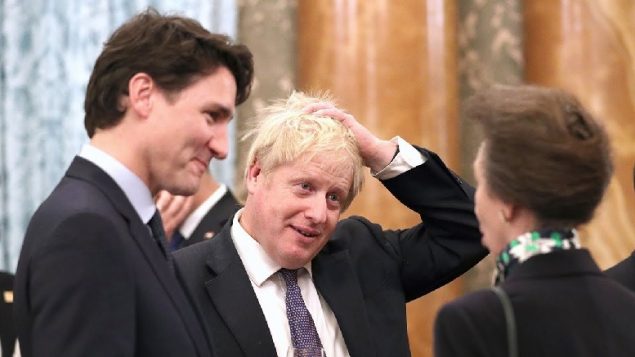 Canada’s Prime Minister and others appear to discuss the U.S president’s behaviour

A short video of leaders chatting informally at a gathering at Buckingham Palace of NATO leaders Tuesday night has gone viral, with many pundits suggesting they are mocking the U.S leader.

It seems the leaders holding glasses of alcohol were not aware there was a camera and microphone nearby. If the 70th anniversary gathering was intended to promote unity, this video might not be helpful.

Filmed on Tuesday the clip shows Canada’s Justin Trudeau,  British Prime Minister Boris Johnson, French President Emmanuel Macron, Netherland Prime Minister Mark Rutte, and a woman possibly Princess Anne chatting.  While President Trump was not mentioned by name, the U.S leader appeared to be the subject of the conversation and seemingly not in a positive way.

President Trump unexpectedly allowed long impromptu questioning from reporters during  what were to be short one-on-one photo-session chats with Trudeau, Macron, and Jens Stoltenberg of Norway, the secretary-general of NATO.

The video, filmed by the British pool camera, has spread across the internet, and been broadcast on American and other media. 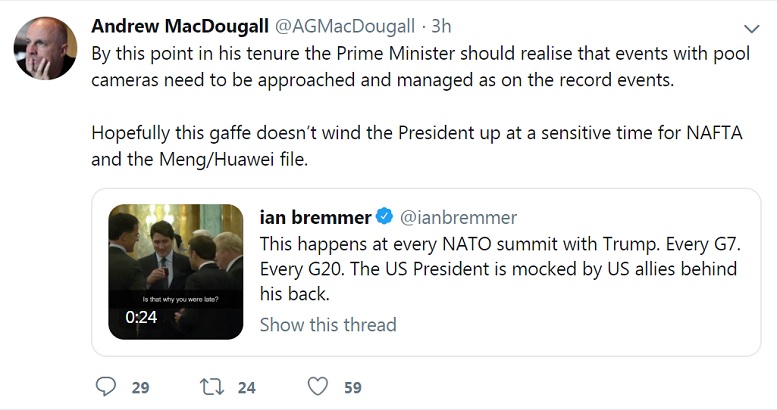 Trump who is known to dislike criticism has yet to react to what some are suggesting is a slight. At an early Wednesday gathering nothing appeared to be out of the ordinary among the leaders.

There has no comment about the video from Trudeau, Johnson, or Macron. While there was no initial reaction from President Trump, he did respond briefly to reporters questions during a one-on-one photo-op with Germany’s Angela Merkel

In a morning news event, saying of Trudeau, “He’s two-faced. He’s a nice guy but I called him out about Canada not paying two percent (defence spending) and I guess he’s not happy about it”