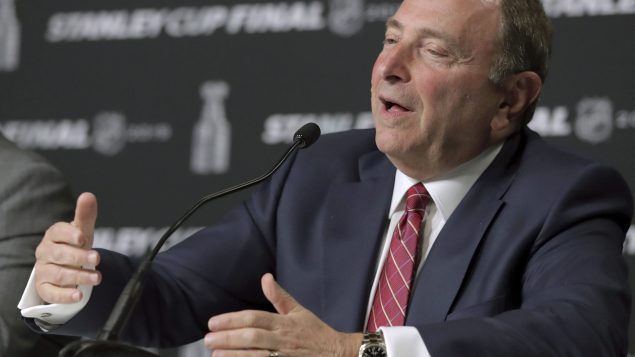 NHL Commissioner Gary Bettman (seen this spring before Game 1 of the NHL hockey Stanley Cup Final between the St. Louis Blues and the Boston Bruins) says the league "will not tolerate abusive behaviour of any kind" following recent allegations of physical and emotional abuse of some players by coaches. (Charles Krupa/AP Photo)

Bettman vows to get tough on abusive personal conduct

Facing what could become a wider public relations nightmare, National Hockey League Commissioner Gary Bettman says the league plans to take action to do a better job of dealing with personal conduct issues.

Speaking in Pebble Beach California while attending the league’s Board of Governors meeting, Bettman told reporters that NHL personnel will be required to attend mandatory counselling regarding racism and bullying.

“Inclusion and diversity are not simply buzz words. They are foundation principles of the NHL,” Bettman said.

“Our message is unequivocal: We will not tolerate abusive behaviour of any kind.”

Currently, Chicago Blackhawks assistant coach Marc Crawford is on leave while the NHL and the Hawks investigate alleged mistreatment of players in the past.

And last month, Calgary coach Bill Peters resigned after a former player, Akim Aliu, alleged Peters had directed racial slurs at him 10 years ago in the minor leagues.

Bettman’s comments on Monday were the first time he has spoken about the issue since Akim made the comments and Peters subsequently quit.

Akim met last week in Toronto with Bettman and deputy commissioner Bill Daly and said afterwards he expects “big change” in the league.

With files from CBC, CP, AP,