Billboards that called for the jailing of Prime Minister Justin Trudeau were displayed in prominent areas across Alberta over the past week, sparking backlash online. A new public opinion survey suggests that people in Alberta and Saskatchewan are VERY unhappy with the direction Canada is headed. (Submitted)

A new public survey appears to confirm what most Canadians had surmized ancedotally–something they saw very much reflected in last fall’s federal election: people on the Prairies are not happy campers.

The Angus Reid poll shows that more than 60 per cent of Canadians living in central Canada, the Atlantic Provinces and British Columbia are happy with the way things are going.

On the Prairies: not so much.

In Alberta, the percentage of people happy with the direction the country is headed has fallen from 53 per cent in in 2016 to 29 per cent now–a drop of 24 percentage points.

In neighbouring Saskatchewan, the figures are almost as stark–57 to 39 per cent–a drop of 18 percentage points.

Satisfaction was higher in Manitoba: about 54 per cent of the those surveyed said were satisfied with the country’s direction, but that’s still a drop of 14 percentage points from 2016.

In its introduction to the survey, the Angus Reid Institute says the “unhappiness is inextricably linked to political perspectives and what partisans want to see from their government. For those who supported the Liberals in October, satisfaction is almost unanimous (90%). Conservative voters, meanwhile, are three times less likely to share this view (31%).” 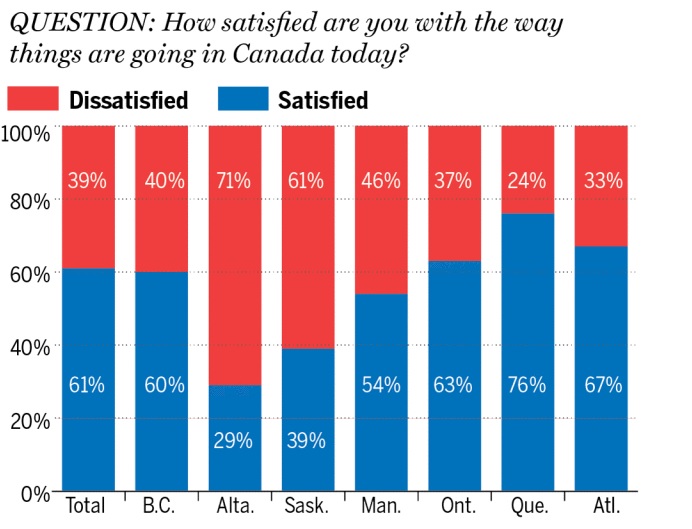 In contrast, the pollsters write,: “Canadians are apparently divorcing some of their dissatisfaction with the country from views about their own, individual future. At least three-in-five residents in every region of the country say they are optimistic about what the future holds for them, personally.”

The poll showed that Quebecers are most positive about the future of their own province (73%) followed by British Columbians (57%).

Meanwhile, Albertans (77%) and Atlantic Canadians (58%) are most pessimistic.

Concerns about the next generation are abundant as well, the pollsters write.

“Across all age groups, three-in-five Canadians say they are pessimistic about the future of the next generation.”

The dissatistfaction across the Prairies was reflected in last fall’s federal election, when the Conservatives swept all 14 seats in Saskatchewan and took all but one of the 34 in Alberta, results that were viewed as an attempt to deliver a message to the rest of Canada, something that has spawned the so-called Wexit movement–comprised of people who–at the very least–want Alberta to separate from Canada.