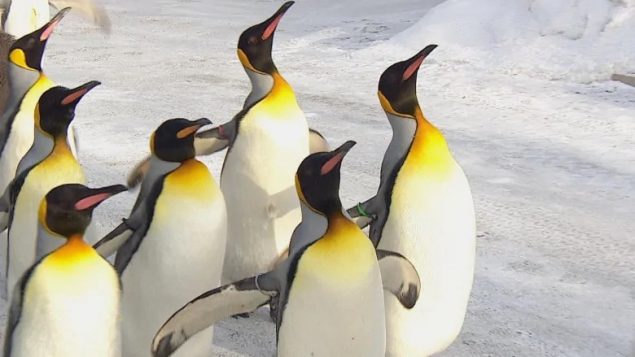 The Calgary Zoo was to resume its annual Penguin Walks on Monday but it has been too cold for the sub-Antarctic king penguins. Here, they take a trial waddle last Thursday. (Mike Symington/CBC)

Canada- too cold for penguins

It’s a big daily winter event that attracts a lot of visitors to the Calgary zoo.

Every day, the staff take the several king penguins for a little waddle around the zoo which takes about 15 minutes much to the delight of the onlookers. The daily winter walks were to begin this Monday, but have been cancelled every day so far this week.

As strange as it may seem for birds from the coldest parts of the southern hemisphere, for the third day this week the zoo had to cancel the event because it was just too cold with an extreme cold warning from Environment Canada

Their website notes, “An Extreme Cold Warning is issued when the temperature or wind chill is expected to reach levels ranging from minus 30°C to minus 55°C for at least two hours depending on your location”.

That’s just too cold for the penguins. That’s because king penguins are from the sub-Antarctic and not adapted to extreme cold as are emperor penguins of the Antarctic.

An Arctic cold front has kept Alberta in extreme cold temperatures around -26C with wind chills making the temperature the equivalent of -45 to -50.  On Wednesday Calgary’s high was -29 with a windchill at -35C.

The zoo says the extreme cold puts too much stress on the birds adding they aren’t taken out when temperatures drop below -25 or above 5C.

King penguins are used to walking long distances to reach the sea and the zoo says a daily walk is beneficial for them, although only those that choose to go on a walk do so.

The daily walks occur from mid January to the end of March. The Calgary zoo now has 15 King penguins and a number of other species including Gentoo penguins.