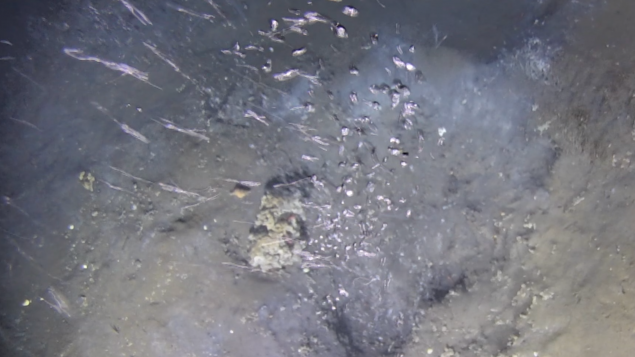 Methane seeps such as these can be observed on many locations on the ocean floor in the Arctic. Investigations of seasonal variability of this type of methane release provide important input for more precise calculations of the climate gas budget. (CAGE/UiT)

A new study from UiT The Arctic University of Norway revealed that estimates of methane emissions released from the Arctic Ocean floor are calculated without taking into account seasonal variability and may therefore be overestimated.

“Because we only go [in the Arctic] during the summer, we usually just multiply whatever comes out [the methane emissions] by 12 to have the yearly rate,” says Bénédicte Ferré, first author of the paper in a phone interview with Eye on the Arctic.

Due to the harsh climate conditions in the Arctic, scientists usually conduct expeditions in the summer and early fall, when the weather and waters are more predictable.

The study published in Nature Geoscience shows that there is far less methane leaking from the Arctic Ocean soil during cold months compared to measurements taken in the summer.

The paper also stresses the importance of correctly estimating methane emissions now in order to better understand how they will evolve in the future and possibly affect climate.

Why is methane so important?

Methane is a powerful greenhouse gas, with a significantly greater global warming potential than carbon dioxide, according to NASA.

According to the Centre for Arctic Gas Hydrate, Environment and Climate (CAGE), which published the study, the atmospheric concentration of methane has almost tripled since the beginning of industrialization. It contributes 16% to the global greenhouse effect and has a lifetime of approximately twelve years in the atmosphere.

The problem is that the origin of this gas is poorly understood by scientists.

“Methane bubbles up from swamps and rivers, belches from volcanoes, rises from wildfires, and seeps from the guts of cows and termites (where is it made by microbes),” says NASA.

In the Arctic, the dangerous gas is meanly leaking out of melting permafrost and the ocean floor.

“When [methane] gets released from the ocean, it can potentially reach the atmosphere.This is the case if we have a stratification that is small enough that we can have a transfer from the sea floor to the surface. And this could potentially affect global warming,” explains Bénédicte Ferré.

The observations were made at 400 metres water depth, where the ocean floor is known for its many methane seeps. Scientists used echo flares to detect the gas bubbles which they call “flares”.

The team compared measurements taken in May 2016 to previous ones taken in August 2012.

“In summer, the water is more than 4 °C compared to 1.3 °C in May at the bottom of the ocean,” explains Bénédicte Ferré. “So what we see when the water is much colder is methane emissions reduced by almost half compared to what we usually measure during the summer.”

First we thought that there was a problem with our echo flares because we could not see anything and it turned out that there was pretty much nothing in the water column at that time.Bénédicte Ferré, first author of the paper

Video caption: The methane is released as bubbles which can be seen as flares in echo sounder surveys. Here is an example of a marked difference between flares observed in winter (May) and Summer (August). (B. Ferré/CAGE, UiT)

The area where the study was conducted is at the limit of the so-called gas hydrate stability zone. Gas hydrates are solid, icy compounds of water and, often, methane. They remain solid beneath the ocean floor as long as the temperatures are cold and the pressure is high enough, the study says.

“If the pressure decreases and the temperature increases, then the gas hydrates become less and less stable. So when we have a constant moving between stable and unstable conditions, this is when we observe these seasonal variability,” says Ferré.

More than 90 percent of the methane released from the ocean floor never reaches the atmosphere.

This is partly due to the physical properties of the ocean itself such as currents and water column stratification, explains the study. 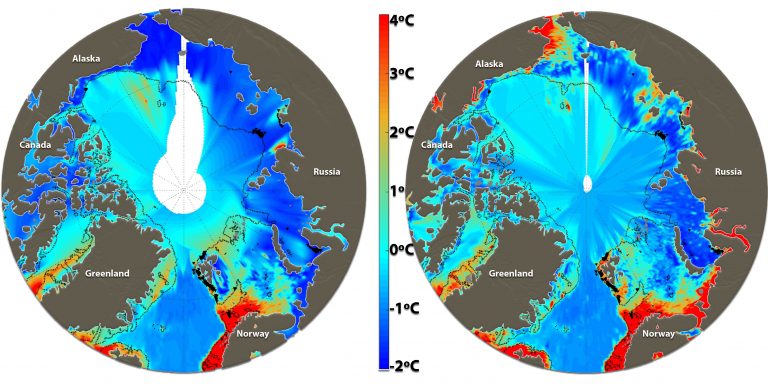 There are effectively only two seasons in the High Arctic: a long winter and a milder summer season. Arctic Ocean bottom water temperatures vary greatly from winter to summer season. This is also evident in the study area offshore Svalbard. (B. Ferré/CAGE, UiT)

But methane is also consumed by specific bacteria (methanotrophs) in water columns.

“Before, we thought that those bacteria were only dependent on how much methane there is in the water column,” says Bénédicte Ferré. “But there was nothing in the columns in May, which means that there is also a seasonal variability in this microbial activity.”

Before, biogeochemical processes, such as methane oxidation by bacteria, had not been considered to be strongly influenced by seasonal changes. But the results gathered by Ferré’s team proved that this correlation exists.

A warning for the future

The Arctic Ocean is expected to warm between 3 °C and 13 °C in the future, due to climate change.

Although this study does not address future methane emissions, it provides an overview of the current situation and sends a warning.

It highlights the possible impact of a consistently warm bottom water temperature over a 12-month period.

“At 400 metres water depth we are already at the limit of the gas hydrate stability. If these waters warm merely by 1.3 °C this hydrate lid will permanently lift, and the release will be constant,” said Ferré in a press release.

The researcher now hopes that her results will be taken into account in future predictions and that other studies will be conducted during the winter months.