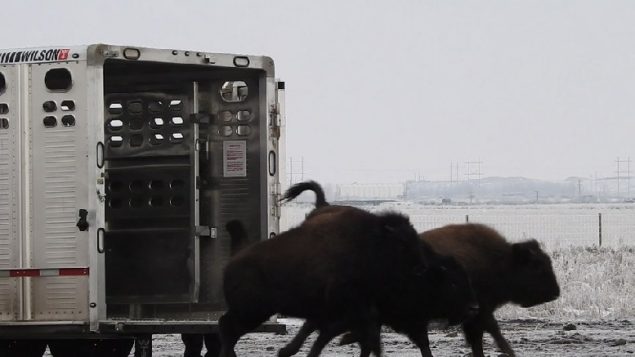 Six bison released in December at Wanuskewin. They were given a month to get used to new surroundings before being revealed to the public (CNW-Parks Canada)

Just days after a story about a small herd of plains bison being given to a First Nations reserve in Saskatchewan comes another similar story.

The bison ( or buffalo as they are often called) once roamed the prairies in the millions. In recent years efforts are being made to re-introduce them into those areas where they once roamed.

Last week a small herd of 6 female bison was unveiled to the public at the Wanuskewin Heritage Park. They had joined a small group of a bull and four pregnant females brought in from the U.S. at about the same time.

The park is a large, modern indigenous cultural interpretive centre just north of Saskatoon. The bison came from the protected herd at Grasslands National Park in south central Saskatchewan and extends north from the Montana, U.S., border. 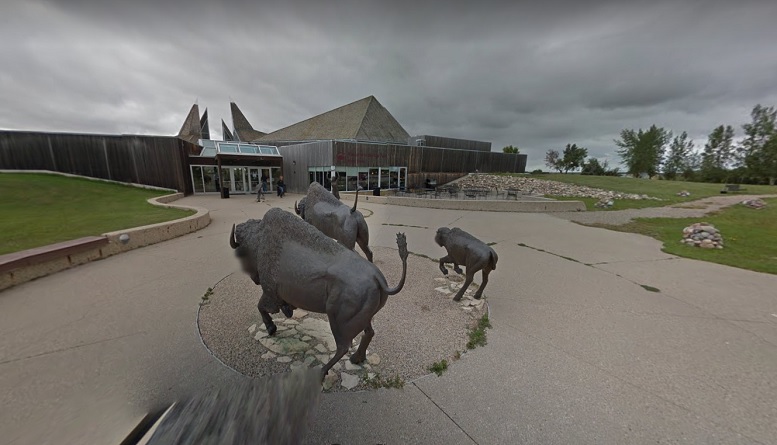 Statues of bison at the entrance to the Wanuskewin Heritage centre indicate the central role the animals played historical in the lives and culture of indigenous people of the prairies. (google streetview)

The arrival of the bison at the 240 hectare park signals a significant development at the park where bison represent a major part of plains indigenous history and culture, and a return of the animals after an approximately 150 year absence from the area.

Grasslands National Park is home to a managed herd of genetically-pure Plains bison.  The Parks Canada herd is disease free, and cattle gene-free.  The Grasslands females will join the group at Wanuskewin which originated from the U.S with genetics from a Yellowstone herd.

The goal is to eventually grow the herd to at least 50 animals. This is a also part of the effort to gain recognition as  a United Nations Educational, Scientific, and Cultural Organization (UNESCO) World Heritage Site.

There is also th desire to protect the park as the city of Saskatoon expands around it, already a mere three kilometres away.

Local businessman and Wanuskewin donor Wayne Brownlee announced his foundation will be donating $5 million to the park.

Quoted in a press release he said, “Our vision is, in 10 to 20 years from now it will be a very significant urban park within the city limits of Saskatoon. It will be a living park because we have a herd of some 50 animals here”.