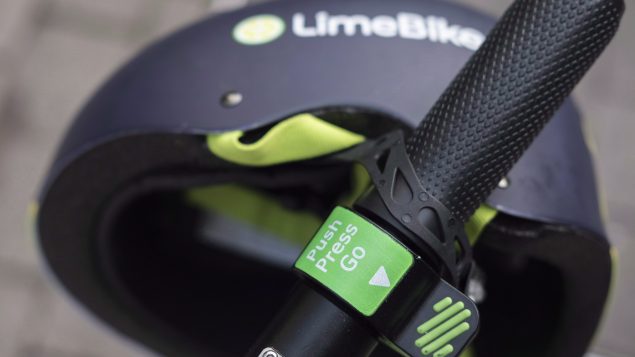 A branded helmet hangs off a motorized scooter during a demonstration of the Lime-S in Toronto on Thursday, Sept. 27, 2018. (The Canadian Press/Giordano Ciampini)

After a pilot project, the ciy of Montreal has decided to ban shared e-scooters in 2020.

According to CBC News the announcement was made at an executive meeting on Feb. 19, by Montreal city Councillor, Éric Alan Caldwell.

He said that the ban is happening because users of the e-scooters were not respecting the rules of vehicles in the city.

The city of Montreal had 410 designated parking spaces for the shared e-scooters, however according to a city report, only 20 per cent of the parking spaces were used, meaning that most of the e-scooters were improperly parked, and could lead to security issues with pedestrians, cyclists and motorists.

One e-scooter ended up at the bottom of the Lachine Canal.

The report also said that the Service de Police de la Ville de Montréal (SPVM) had given out 333 tickets to people using e-scooters for not respecting the Highway Safety Code, 324 of which were because users were not wearing helmets.

The e-scooters were operated by Lime, and Bird Canada.

“This unexpected temporary pause in the Montreal scooter program is incredibly disappointing and a major step backwards for the people of a city committed to reducing congestion and carbon emissions,” Michael Markevich, Lime general manager said in a statement sent to Radio-Canada International.

“We remain open to solutions that address the city’s concerns and are eager to bring the program back as soon as possible,” he added.

Lime also said that there weren’t enough parking spots provided for the e-scooters, they were inconveniently placed, and far from places people were travelling to and from.

In an email statement sent to CBC News, Bird Canada said that they were “disappointed by the decision,” but is hopeful that Montreal will bring them back in 2021 “when the city will have resolved its parking issues.”

The city of Montreal had introduced the pilot project last August. The initial launch provided 430 e-scooters in certain neighborhoods across the city.