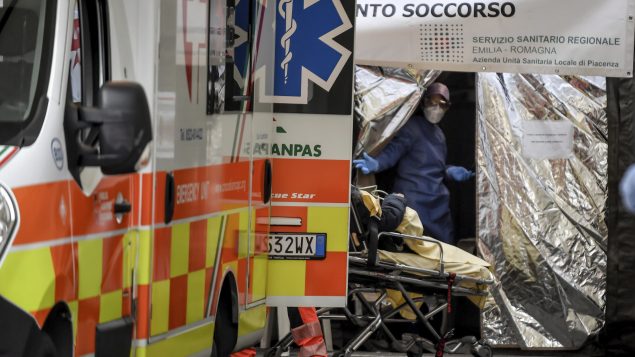 A woman on a stretcher is carried out of an ambulance into a tent set up by the Italian Civil Protection next to the emergency ward of the Piacenza hospital, northern Italy, Thursday, Feb. 27, 2020. Italy is changing how it reports coronavirus cases and who will get tested in ways that could lower the country's caseload even as an outbreak centered in northern Italy spreads in Europe. (Claudio Furlan/Lapresse via AP)

Two English language high schools in the greater Montreal area have decided to postpone or straight up cancel their student trips to Europe due to concerns of the coronavirus.

The news came later on the same day a school in L’école Polyvalente Le Carrefour in Gatineau, Quebec, cancelled a student trip to Japan over fears of the coronavirus.

Students from Sir Wilfred Laurier School Board’s Laval Senior Academy and from the English Montreal School Board’s Westmount High School, were both set to leave for their trips on Thursday.

According to CBC News, parents of the Laval Senior Academy students who were supposed to go on the trip to Italy began calling the board when there was news reported on the outbreak of coronavirus in Italy. The school board cancelled the trip on Tuesday.

“The school board cancelled the trip as it could not ensure the safety and security of its staff and students,” Maxime Jolin, a communications person for the Sir Wilfred Laurier School Board, said in an email to Radio-Canada International.

Jolin added that no other school trips have been cancelled at this time.

Both of the trips were organized by EF Education Tours Canada, the same group that had organized the Gatineau school trip as well.

When Radio-Canada International reached out to the EF Education Tours Canada yesterday, a spokesperson said that parents who bought travel insurance for the trip will receive reimbursement. Those that did not will receive a travel voucher.

“We are allowing groups who were scheduled to travel to the most significantly impacted regions through March 31 to rebook without penalty. This policy allows groups to delay or change their plans, including to domestic options, or take a refund in the form of a travel voucher right up to the day of departure,” a spokesperson for the company said yesterday.

EF Tours also said that they are not cancelling any trips themselves, but are modifying certain trips, and offering alternatives to make sure everyone feels safe and supported.

“To date we have absorbed the costs associated with making changes to itineraries. So we simply go ahead and make those changes working in collaboration with the group,” said a spokesperson for EF Tours.

Students from the EMSB’s Laurier Macdonald High School already left for a trip to France and Italy, EMSB spokesperson Micheal Cohen told CBC News that the school and company organizing the trip changed the Italy portion of the trip to Switzerland.

The number of cases of coronavirus in Italy has increased to 324, and has killed 12.

The World Health Organization declared the coronavirus a global health emergency last month. The virus has infected over 80,000 people worldwide, and killed over 2,700.

A previous version of the story indicated that EF Educational Tours Canada had organized the school for Laurier Macdonald High School. That is not the case, and the story has been updated to reflect that.