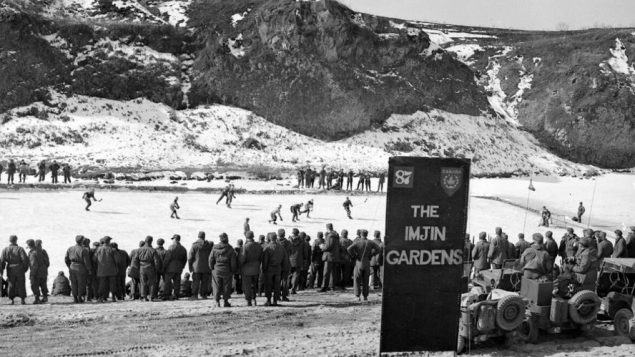 Canadians play hockey within range of Communist guns in Korea, 1952. At the time, three of the most famous arenas in N.America were the Toronto Maple Leaf Gardens, the Boston Gardens, and Madison Square Gardens, thus the makeshift wartime rink was affectionately named "the Imjin Gardens"

History Canada: March 11,1952: Hockey breaks out at the front lines of war

In the midst of the Korean War, Canadians were among the U.N. forces manning the hills that constituted the front line facing Communist forces of the North Koreans and Chinese. Between those hills flowed the Imjin river below. The winters were cold enough to freeze the river, and to Canadians a frozen ice surface is always an irresistible attraction to play the national winter sport. 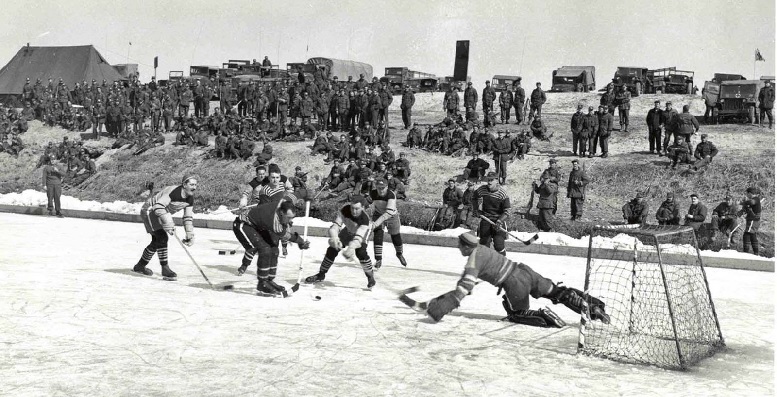 Initially Canadians began playing in their combat uniforms until more proper equipment and uniforms were sent from Canada. The games became a great distraction from the battles never far away (DND)

Reacting to requests, and considered a necessary morale booster, hockey equipment from Canada was flown to Korea and then trucked to the front lines. Immediately the ice was cleared while sandbags and bits of wood were set up to define the rink boundaries. Right away the regiments organised teams and began playing against each other. Matches were held with the sounds of war echoing between the hills as a backdrop to the sounds of cheers and jeers from spectating troops. Veterans later recalled that it gave them a couple of hours to forget about the war even if you could still clearly hear it.

ANZAC forces also got into the spirit and with little skating experience, provided quite good entertainment in the place of good hockey.

By March, the 25th Canadian Infantry Brigade “Imjin Cup” championship match to end the ‘official’ season was organised pitting a PPCLI team against an R22eR squad 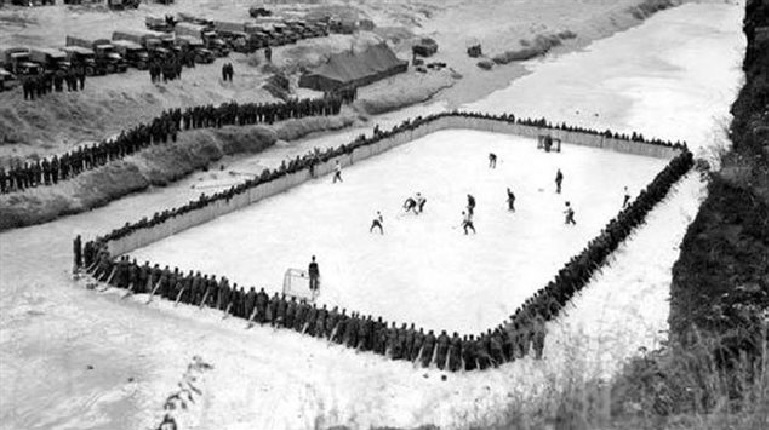 Spectators were either soldiers who had just come off front-line duty, or came from reserve units to watch the games at the “Imjin Gardens” rink, especially the March 11, Imjin Cup championship game. Their rifles were never far away, and a tank can be seen just past the tent, as an attack by Communist forces on the nearby hill tops of the front line was an ever-present possibility. During this game, the Princess Patricias won 4-2 against the Royal 22e Regiment.
(Photo Credit: R22eR archives)

Thus it was that on March 11, 1952, Canadians and other U.N forces with rifles at their sides, gathered at the makeshift rink which was always within range of Communist artillery.  Many decades later a veteran recalled that he was driven from his front line post to play in the match in a trip that took a mere five minutes by jeep, indicating how close the games were to the front.

The PPCLI and the VanDoos faced off in an exciting and hard fought game. The 3rdBn PPCLI won, and the 2ndBn VanDoos, (“who never lose”), ‘didn’t win’.  Apparently the final score was 4-2.

Along with the infantry, the RCN and RCAF also served in the war. Over 26,000 Canadians in total served in the Korean War, 516 lost their lives. 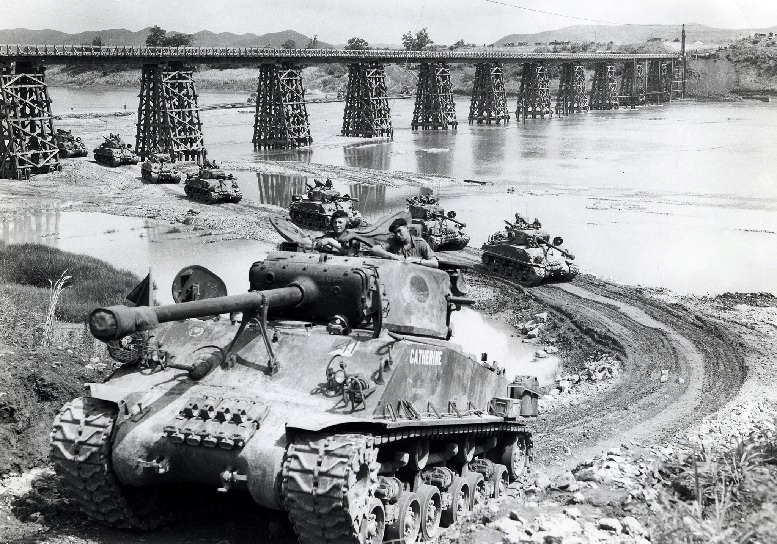 In spite of the sport, the war was never far away. Here Canadian tanks of the Lord Strathcona’s Horse (LdSH) at the Imjin River, July 16, 1952. Canadians were involved in some of the fiercest battles in Korea ( LAC PA 115496)

The hockey game was revived in 1998 by an ex-pat bar owner in Seoul in 1998 who organised other expats and Korean enthusiasts into playing the  “Imjin River Memorial Tournament” inspired by an old black and white photo on the wall of his bar.  Eventually news of these games made it back to Canada and in 2013 the “Imjin Classic” was held in Ottawa on the frozen Rideau Canal. Various versions of the Imjin Classic are now held annually. In 2018 current members of the PPCLI and the VanDoos along with some veterans in attendance, recreated the 1952 game in S.Korea but this time on the two regiments were on same team and playing against a S.Korean team.