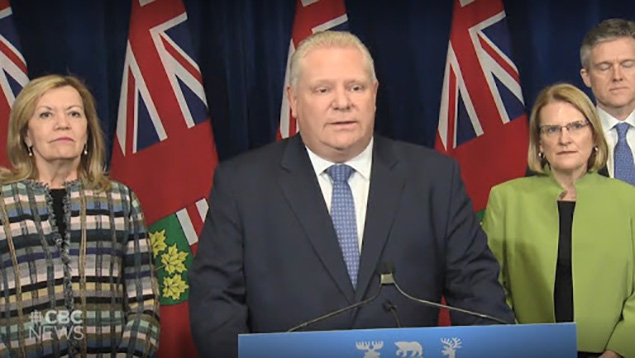 States of emergency declared in Ontario and Calgary

In light of the spread of the corona virus COVID-19, the premier of Canada’s most populous province has declared a state of emergency. This follows an earlier announcement for a local state of emergency in the western city of Calgary, Alberta.

In making the announcement this morning, Ontario Premier Doug Ford said of the situation, “We’re facing an unprecedented time in our history….COVID-19 constitutes a danger of major proportions. We must act decisively, we must not delay.”

Premier Ford insisted that the order does not mean the province is shutting down noting that the vast majority of businesses vital to day-to-day life will remain open, but several measures will be instituted such as the prohibiting of any public events, parades, or gatherings of over 50 people until March 31.
Ontario has already ordered the closing of public and private schools until April 6, but now all theatres- both live performance and cinemas, other concert venues, libraries, and houses of worship, and child care centres, will also be mandated to close.

Bars and restaurants will also be closed except for those that can offer take-out or food delivery.
Public transit, grocery stores, and pharmacies are so far not affected. Shopping malls are also not affected at least for the moment.
The order does not affect important public services, manufacturing, construction sites, or office buildings.

Premier Ford also said $300 million will be dedicated to providing up to 75 critical care beds, 500 post-acute beds, two dozen COVID-19 assessment centres, and physicians for remote areas of the province. It will also go towards acquisition of more protective gear for medical staff such as gloves and masks and towards payment for backfill of nurses and other staff.

Ontario now has 177 confirmed cases of the virus, although five have been declared resolved.

Yesterday the city of Calgary in Alberta, was the first to declare a local state of emergency. All city owned fitness centres, pools, libraries and the city zoo are closed. Alberta’s Premier, Jason Kenny, earlier announced the closure of all daycares, schools and universities until further notice.