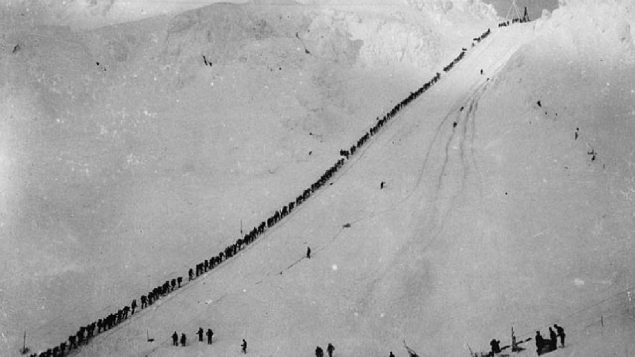 On this day in 1898, Canada send a small group of its fledgling permanent militia to protect Canada’s interests in the far north from potential U.S. occupation.

Canada and the U.S. like to boast that through a history of friendly relations, they have the world’s longest ‘unprotected’ border. While that is essentially true, in that troops are not stationed along the border to defend against the other, there have been several instances of conflict and potential conflict. Other than the war of 1812, before ‘Canada’ became its own country there have been a number of incidents since then where tempers flared.

In 1896, gold was discovered in the Yukon. By 1897, thousands began flocking  to the Klondike, mostly from the U.S. By 1898, this had become a flood of mostly men intent on ‘striking it rich’; all kinds of men, including a lot of hopeful men, many unprepared, mostly eager, some desperate, and not a few unsavoury types.

Soon there were many times more Americans in the region than Canadians.  Although the Northwest Mounted Police under Sam Steele, has maintained order, they were undermanned.

Hundreds of miners tents at the head of the Klondike River, a temporary stop before moving further into Yukon and the Klondike May 1898 (LAC- PA016157)

The idea of ‘manifest destiny’ first coined in 1845, whereby the U.S. should occupy the entire northern continent, still lingered in some minds and the actual border between Yukon and Alaska was still in dispute and had been for some time. 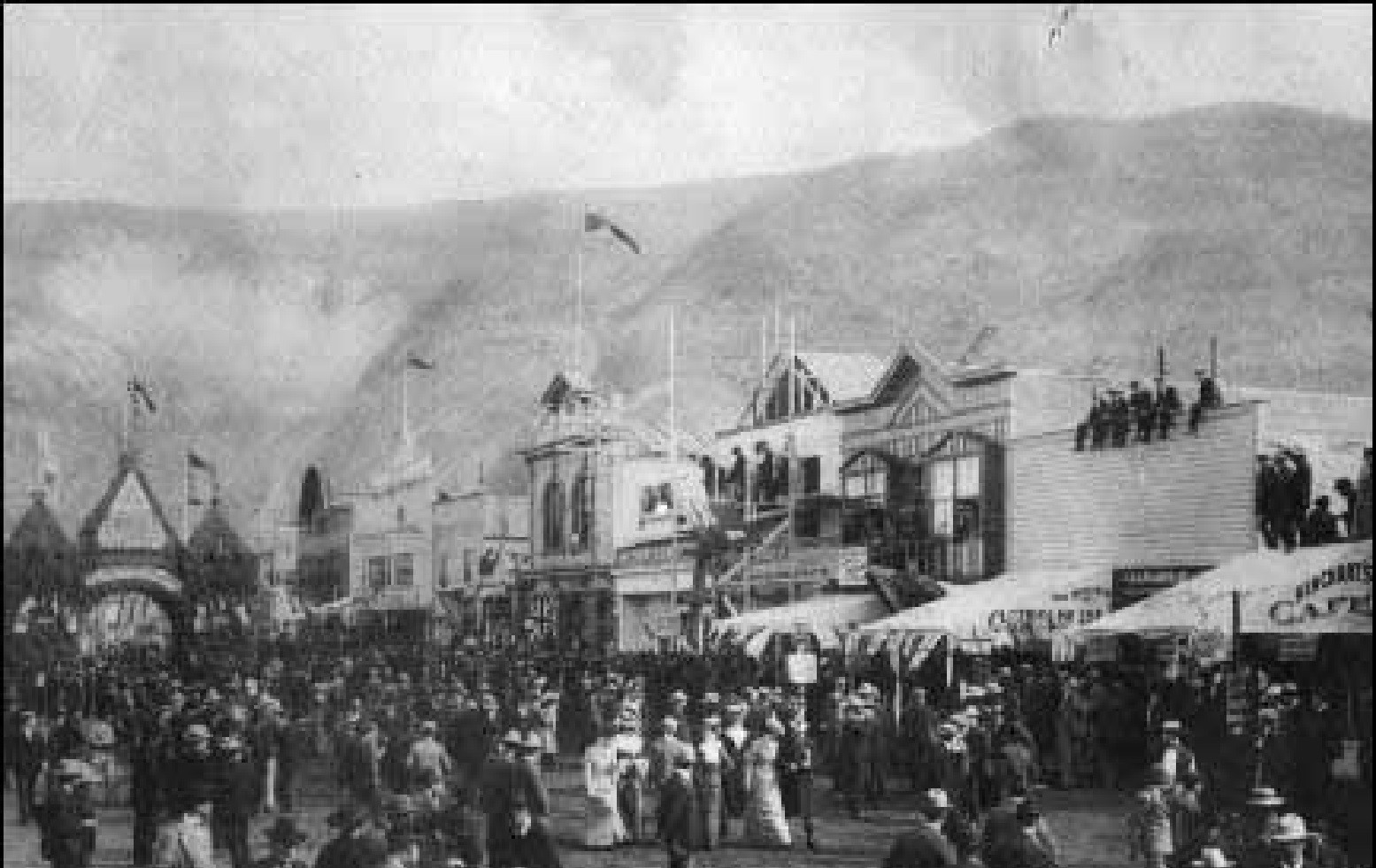 The boomtown of Dawson City August 1900 during a visit by the Governor General. The NWMP and YFF helped ensure the crowds of rough miners, gamblers and women conducted their business orderly. and kept American and Canadian conflicts to a minimum ( Glenbow Archives NA-4412-24

There were also occasional frictions between Canadian and American miners, and an undercurrent of grumbling against the somewhat strict controls of the NWMP which prevented any semblance of a ‘wild west’ or lawlessness occurring.

Greater than that though were fears that with so many Americans, clearly outnumbering Canadians , they might just decide to take over the area, establish their own provisional government and calling in the U.S. military to protect them. In an article in the Yukon News, author Michael Gaters quotes Canada’s then Minister of the Interior Clifford saying said,“We have before us the great danger of the authority of this government being over-ridden, being destroyed, and the government of that district being, theoretically, if not actually, taken out of our hands.”

Ottawa decided to act an on March 21, 1898, and ordered a military force to be created and sent immediately to the region.

Thus it was that 203 men formed the Yukon Field Force under the command of  Lt.Col T.D.B Evans of the Royal Canadian Dragoons (RCD). The force would include, five staff, 16 RCD, 49 Royal Canadian Artillery (RCA), and 133 members of an infantry group which eventually become the Royal Canadian Regiment (RCR). Along with standard issue Lee-Enfield .303 rifles, they had two Maxim heavy machine guns and two seven pound field artillery pieces 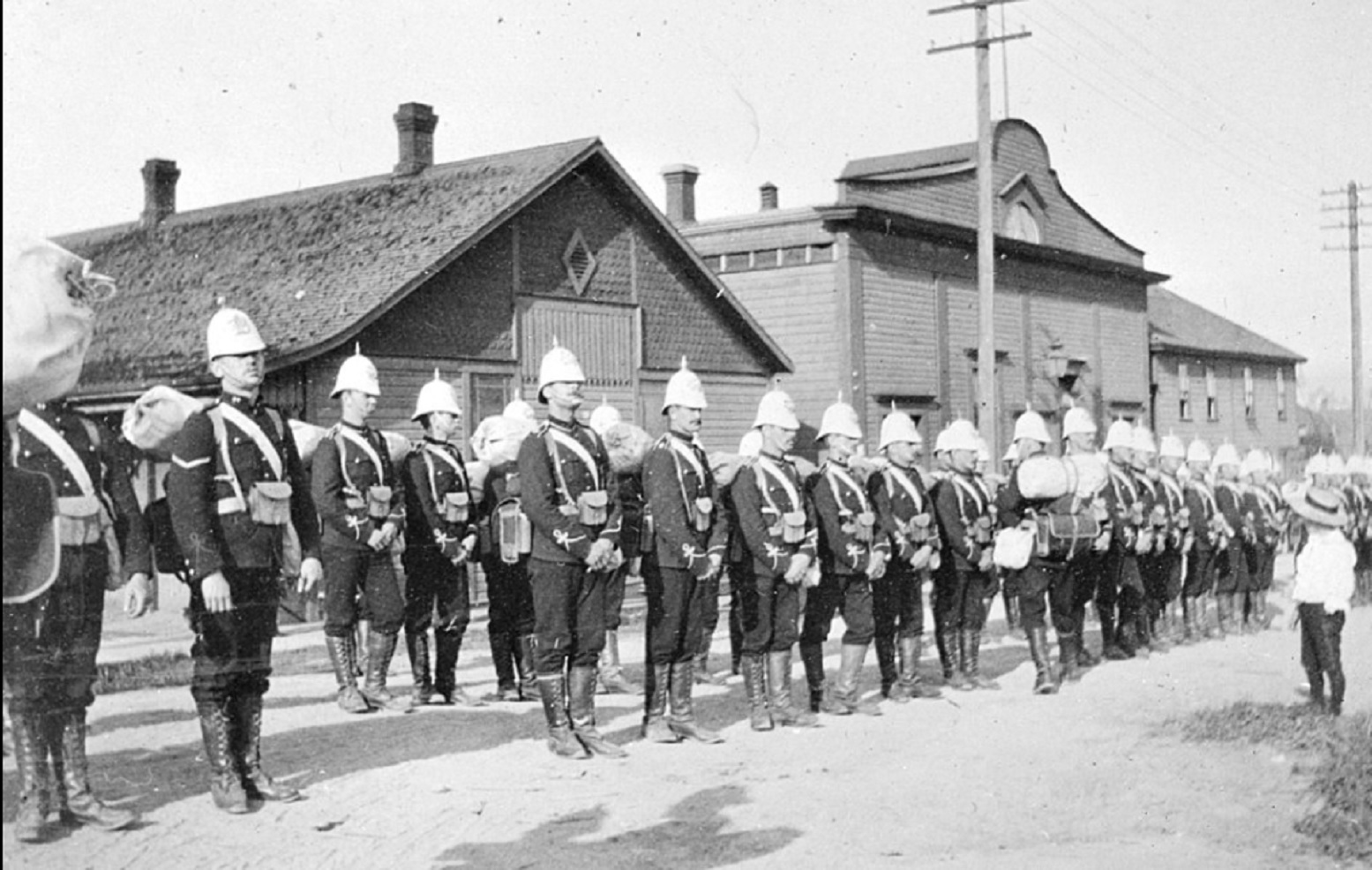 Thus is was on this day May 6, that the militia force left Ottawa to defend Canada’s Yukon. Although they reached Vancouver days later, and proceeded by ship to the Alaska panhandle.

For political reasons the force would not travel by ship to the American towns of Dyea or Skagway which would have allowed much quicker access to the Klondike, they instead took a longer and more difficult route up the Stikine River and the Teslin Trail. To augment the bully beef and hardtack, soldiers would attach bayonets to long poles and spear salmon. 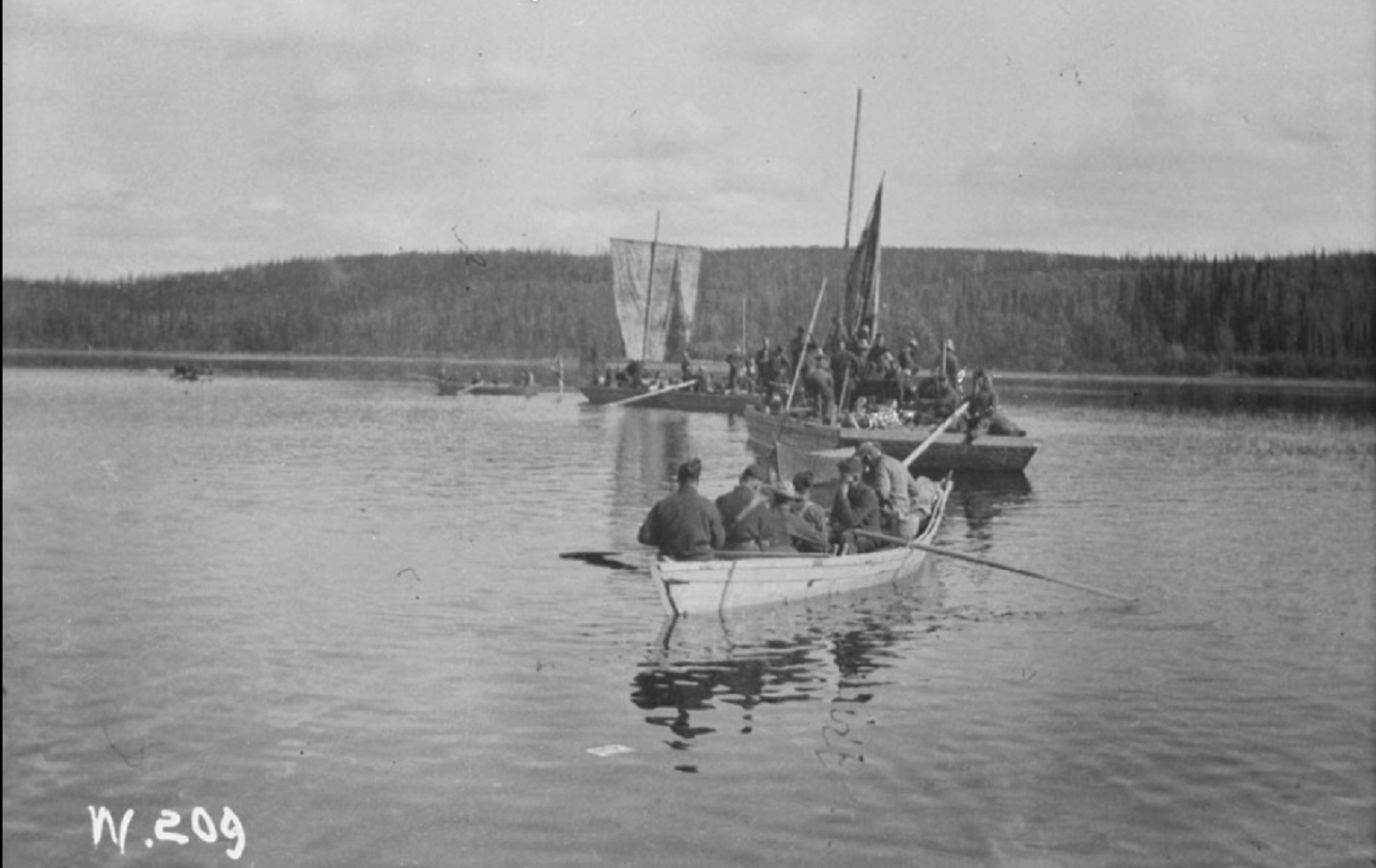 The force crossing Teslin Lake in improvised barges and row boats, 1898 on their way towards the Klondike ( HJ Woodside- LAC PA-016882)

An advance group had been sent on to build barracks at Fort Selkirk in the heart of the Klondike with half the force and one Maxim gun there, and the other half and machine gun at the boom town of Dawson, where the bars were operating from dusk to dawn seven days a week.. The force settling in only in September with one of their tasks being to guard the banks and gold shipments. 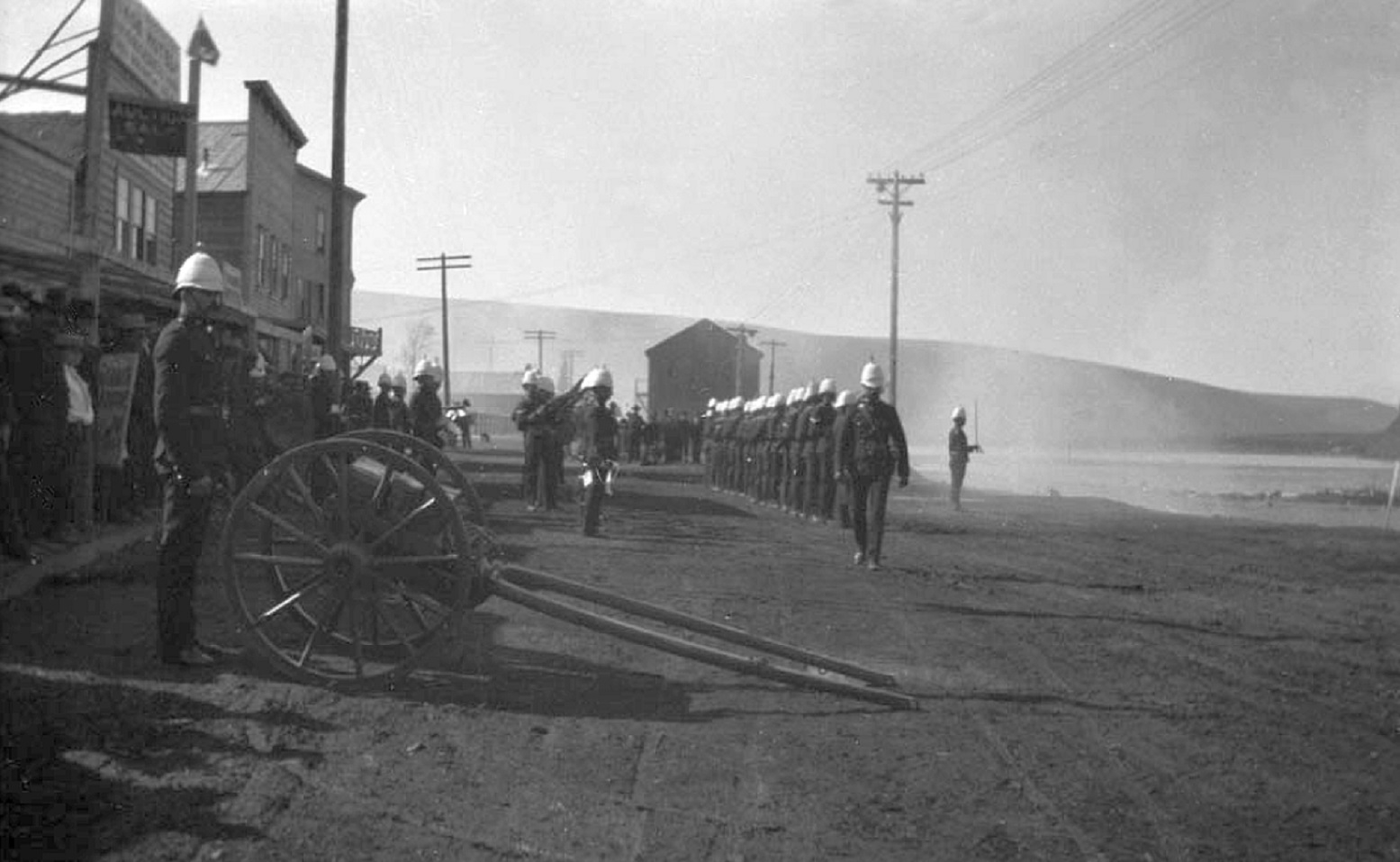 The Garrison at Dawson City May 1900, Most were withdrawn that year as the gold rush had greatly diminished ( HJ Woodside- LAC-Pa017109)

While the force did not engage in any military action or incident, the mere fact they were on their way, and their eventual presence likely calmed any thoughts of an American takeover.

The border dispute was eventually settled through a diplomatic board consisting of three Americans, one British and two Canadians.  The Americans were adamant, and the Briton sided with them, a fact which Canada long viewed thereafter as a betrayal.