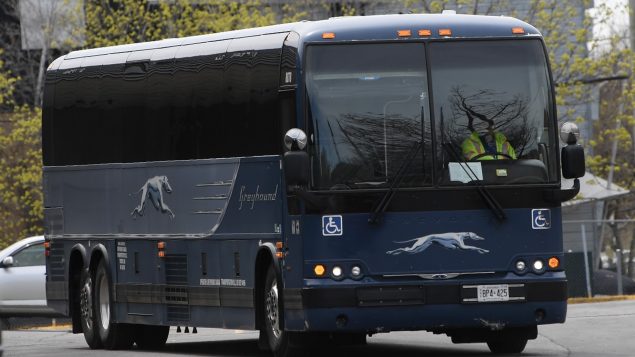 A Greyhound bus is driven out of the bus terminal in Ottawa, Thursday, May 7, 2020 in Ottawa. Greyhound announced it would be shutting down completely due to a precipitous drop in passengers caused by the pandemic. (Adrian Wyld/THE CANADIAN PRESS)

Greyhound suspends all bus routes in Canada due to COVID-19

Greyhound Canada will halt all of its remaining bus routes in Eastern Canada starting May 13 because of the “devastating impacts of this pandemic,” the company announced Thursday.

The company had already stopped its service in Western Canada in 2018, but the pandemic has caused ticket sales for its remaining routes in the eastern part of the country to plummet by 95 per cent.

Greyhound has also been forced to scale back its trans-border routes between Niagara Falls, Ont., and Buffalo, N.Y.; Windsor, Ont., and Detroit; and Montreal and Champlain, N.Y.

The company said that as of midnight next Tuesday, the following remaining routes will no longer be in service:

“As we continue to navigate this situation, we will keep our customers and employees who are affected by this temporary shutdown top of mind,” said Stuart Kendrick, the company’s vice-president, in a release.

“We regret the difficulty that this will cause them, but this decision came as a last resort option to address the uncontrollable consequences and devastating impacts of this pandemic.”

About 400 employees will be temporarily laid off as a result of the decision.

The Amalgamated Transit Union (ATU), which represents 34,000 transit professionals in nine Canadian provinces, blasted the federal government for “their failure to act definitively to save the service.”

ATU Canada president John Di Nino said the Liberal government has given the industry the cold shoulder during the pandemic.

“These workers see federal inaction as a betrayal and a denial of their value as part of the workforce,” Di Nino said in a statement.

Intercity buses are a public good and the workers in the industry do critical work connecting northern and rural communities to vital services, he added.

“These workers are no less important than any other workers in those federal industries that the Liberal government has supported during the pandemic,” said Di Nino.

With files from Pete Evans of CBC News