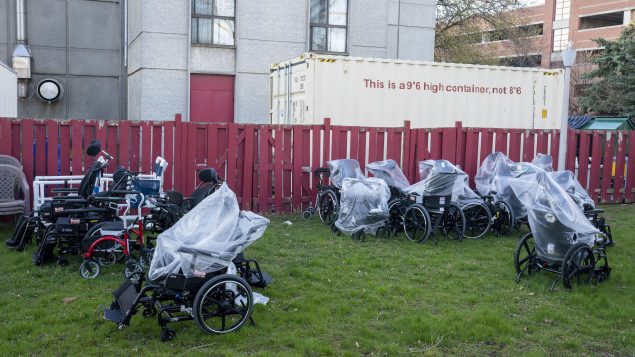 Wheelchairs sit behind Camilla Care in Mississauga, Ont. on Tuesday, May 12, 2020. Fifty residents from the long-term care home have died from COVID-19. Provincial authorities in Ontario are launching an an independent commission into the long-term care system in the province. (Frank Gunn/THE CANADIAN PRESS)

Ontario is launching an independent commission into its “broken” long-term care system after more than 1,400 COVID-19-linked deaths in the province’s nursing homes and long-term care facilities.

Long-Term Care Minister Merrilee Fullerton said in a statement released Tuesday that the commission will start in September.

Over the next several months, the Progressive-Conservative government of Premier Doug Ford will be finalizing details of the commission including terms of reference, membership, leadership of the commission and reporting timelines, Fullerton said.

“We have been clear the long-term care system in Ontario is broken,” Fullerton said. “We must act quickly and decisively, and that is why an independent non-partisan commission is the best way to conduct a thorough and expedited review.”

The Ontario Long-Term Care Association, opposition parties and the Service Employees International Union (SEIU) have all called for a full public inquiry into the sector, rather than an independent commission.

According to data compiled by CBC News, there have been 1,467 deaths linked to COVID-19 at long-term care homes.

The number of long-term care homes experiencing an outbreak has grown over the past few weeks, even as the government has imposed more restrictions and implemented widespread testing for the virus.

Ontario has reported outbreaks at 280 long-term care facilities and 115 outbreaks in retirement homes since the beginning of the crisis.

As of Tuesday morning, Ontario reported a total of 23,384 confirmed cases and 1,919 deaths since the beginning of the outbreak, which means that over 76 per cent of fatalities caused by the new coronavirus occurred in long-term care facilities.

Ontario, Canada’s largest province, becomes the first jurisdiction in the country to announce a wide-scale investigation into its long-term care system as a result of the coronavirus pandemic.