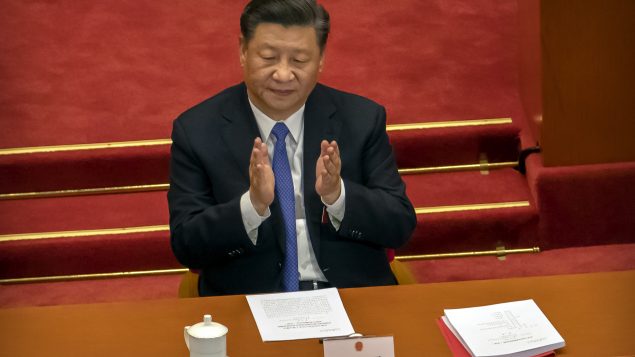 Chinese President Xi Jinping applauds during the closing session of China's National People's Congress (NPC) in Beijing, Thursday, May 28, 2020. China's ceremonial legislature overwhelmingly endorsed a national security law for Hong Kong on Thursday that has strained relations with the United States and Britain and triggered protests in the semi-autonomous territory. (Mark Schiefelbein/AP Photo)

Canada joined the United Kingdom, the United States and Australia on Thursday in condemning Chinese national security legislation for Hong Kong that democracy activists in the city and Western countries fear could erode its freedoms and jeopardise its role as a global financial hub.

“Hong Kong has flourished as a bastion of freedom,” the U.K., the U.S., Australia and Canada said in a joint statement, expressing their “deep concern regarding Beijing’s decision to impose a national security law in Hong Kong.”

Beijing’s direct imposition of national security legislation would “curtail the Hong Kong people’s liberties, and in doing so, dramatically erode Hong Kong’s autonomy and the system that made it so prosperous,” the statement by four allies added. 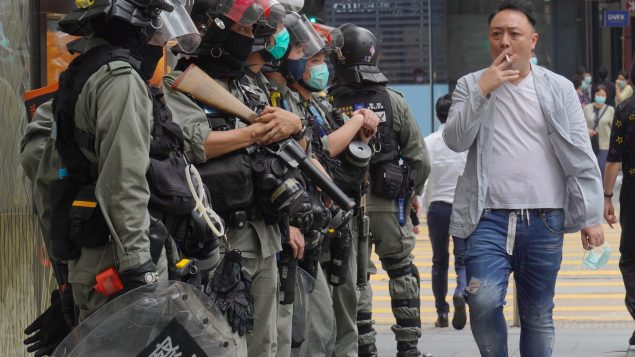 A man smokes past a line of riot police at Central during the second day of debate on a contentious bill that would criminalize insulting or abusing the Chinese national anthem, in Hong Kong, Thursday, May 28, 2020. (Vincent Yu/AP Photo)

“China’s decision to impose the new national security law on Hong Kong lies in direct conflict with its international obligations under the principles of the legally-binding, UN-registered Sino-British Joint Declaration,” they said.

“We are also extremely concerned that this action will exacerbate the existing deep divisions in Hong Kong society,” they said in the joint statement.

China says the legislation will aim to tackle secession, subversion, terrorism and foreign interference in the city but the plan, unveiled in Beijing last week, triggered the first big protests in Hong Kong for months.

“We call on the Government of China to work with the Hong Kong SAR (Special Administrative Region) Government and the people of Hong Kong to find a mutually acceptable accommodation that will honour China’s international obligations under the UN-filed Sino-British Joint Declaration,” the statement said. 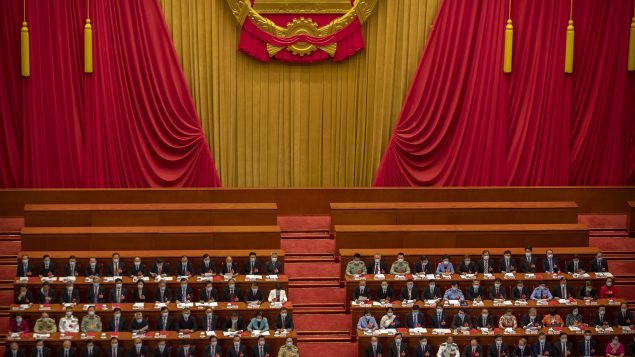 Delegates attend the closing session of China’s National People’s Congress (NPC) at the Great Hall of the People in Beijing, Thursday, May 28, 2020. China’s ceremonial legislature has endorsed a national security law for Hong Kong that has strained relations with the United States and Britain. (AP Photo/Mark Schiefelbein)

Chinese Ministry of Foreign Affairs spokesperson Zhao Lijian said Wednesday that the legislation “is purely China’s internal affair, and no foreign country has the right to interfere.”

“The Chinese government is firm in its determination to safeguard China’s sovereignty, security and development interests, to implement the principle of ‘one country, two systems’ and to oppose any external interference in Hong Kong affairs,” Zhao said.

“If someone is bent on harming China’s interests, China will take all necessary measures to hit back.”