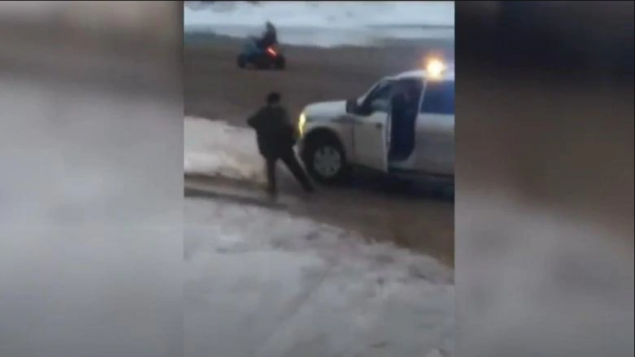 A video shot by a bystander captured the moment an RCMP knocked over a man in Kinngait, Nunavut, Monday night. An officer has since been removed from the community. (CBC)

The violent arrest of an Inuk man in Nunavut, captured on video, has once again raised questions about policing in Canada’s north and relations between the country’s Indigenous communities, racial minorities and the national police force.

The video of the man in the Inuit community of Kinngait being struck by the door of a moving police truck and then being wrestled to the ground by five police officers is also reviving calls for mandatory body cameras for Royal Canadian Mounted Police (RCMP) officers serving in Canada’s Arctic territory.

Speaking at his daily press conference in Ottawa, Prime Minister Justin Trudeau said the video and reports that have surfaced over the last few days are “disturbing” and bring to light “the systemic realities facing far too many Canadians.”

“I think far too many Canadians feel fear and anxiety at the sight of law enforcement officers and authorities of various ways because we continue to have systemic racism in this country, systemic discrimination,” Trudeau said. “That means that Indigenous Canadians, racialized Canadians are vulnerable in these situations.”

This fear and anxiety is not something new for racialized Canadians or Indigenous Canadians, Trudeau said.

“This has long been their reality, but over the past weeks we’ve seen a large number of Canadians suddenly awaken to the fact that the discrimination that is a lived reality for far too many of our fellow citizens is something that needs to end and that is what we are working on,” Trudeau said.

There have already been many reports and recommendations for practical steps that could be taken to change policing in Canada as it relates to Indigenous Canadians and other vulnerable minorities, including the recommendations made by the national inquiry into the Missing and Murdered Indigenous Women and Girls.

Trudeau said he will be discussing this issue in cabinet and with the head of the federal police force, RCMP Commissioner Brenda Lucki, later today.

“I will remind people, however, that the federal government does have authority over the RCMP, but we need to work with provinces and, indeed, municipalities to cover all police forces and justice systems across this country and these are the kinds of things we need to do as a country, across all orders of government in the coming days,” Trudeau said. 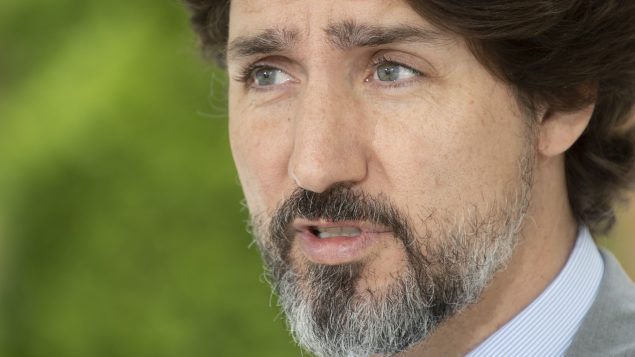 All levels of authorities need to continue to engage to look for concrete measures, he added.

“We’ve made gradual progress over the past years but gradual progress, incremental progress just isn’t enough, we need to make stronger and bigger changes, that’s exactly what we’re going to work on,” Trudeau said.

When asked whether the federal government will support mandating the use of body cameras by RCMP officers, Trudeau said the government is “looking at a range of options.”

Nunavut Justice Minister Jeannie Ehaloak said she supports moving forward with the use of body cameras within the RCMP in the Arctic territory.

“Implementing the use of body cameras is complex, and will take time,” Ehalok said in a statement to Radio Canada International. “We need to look at the issues of funding and the privacy of individuals being filmed.” 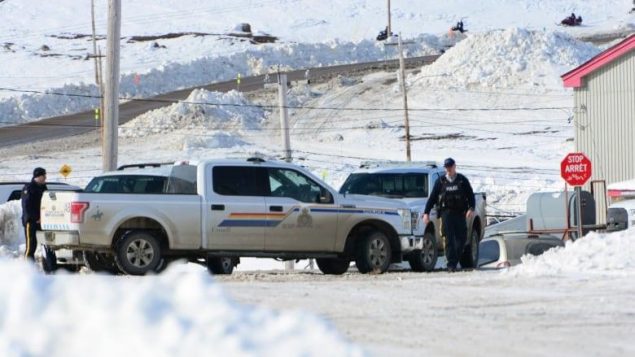 The territorial government is actively researching and consulting with stakeholders, she said.

Nunavut Tunngavik Incorporated, the organization representing Inuit in Nunavut, said in a press release Friday there have been at least 15 deaths in Nunavut at the hands of RCMP officers since the territory was formed in 1999.

“Nunavut Tunngavik Incorporated (NTI) hears from fellow Inuit that Inuit are scared of the RCMP and that police use excessive force in many interactions,” the organization said in a statement to Radio Canada International.

“NTI calls on the Government of Nunavut (GN) and the RCMP to shift their practice from violent behaviour to nurture community wellness with a trauma-informed approach.”

Reforming the delivery of justice programs, however, offers at best only a partial solution, NTI said.

The real determinants of criminal and other forms of destructive behaviour is the lack of social, economic and cultural well-being among the Inuit population of Nunavut, the statement said.

“The consistent and increasing frequency of these violent incidents involving the police indicate these are not one off events, these are systemic issues within the justice system,” NTI said. “It is clear there is a problem at hand and it is time to acknowledge it so change can occur.”

A day after the video surfaced, Nunavut’s premier issued a brief statement on Twitter.

We’re all hurting right now. The death of George Floyd in the US and the movement we’re seeing in response across the world. But also right here in Nunavut, with the video from Kinngait.⤵️

“We’re all hurting right now. The death of George Floyd in the US and the movement we’re seeing in response across the world. But also right here in Nunavut, with the video from Kinngait,” Joe Savikataaq wrote. “Systemic racism and unconscious bias are real — painfully real.”

Savikataaq vowed on behalf of the cabinet and the entire government to continue to fight against it.

There have been a series of recent high profile incidents in Nunavut involving RCMP this year. Police shot and killed a 31-year-old man in the hamlet of Clyde River last month after responding to an incident at a home.