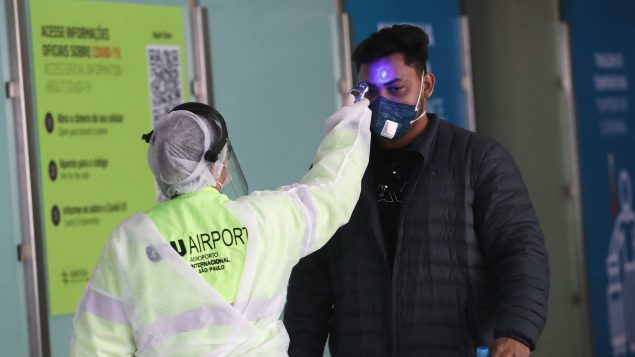 A man has his temperature checked before boarding a flight to United States at Guarulhos International Airport amid the outbreak of the coronavirus disease (COVID-19), in Guarulhos, near Sao Paulo, Brazil, May 25, 2020. (Amanda Perobelli/REUTERS)

“A passenger who has a fever will not be permitted to get on a flight,” Trudeau said.

Employees in the secured areas of airports will also be required to have their temperature checked, he added.

“There are strong measures already in place to keep people safe. This screening will be yet another layer of protection,” Trudeau said.

Thermal screening is not a way of detecting COVID-19 in travelers but it is an additional measure that can highlight symptoms of COVID-19 or show that someone is ill and shouldn’t be travelling at all, Trudeau said.

“It’s not a panacea, it’s not a 100 per cent solution, it’s an extra layer of safety to encourage people who might feel sick to stay home and not travel and put others at risk, and it also aligns with what many of our international partners are doing as well,” Trudeau said.

“It is something that is an additional measure that can make a difference but it has to be included with a suit of measures that we’re moving forward with to keep Canadians safe.”

Temperature checks at airports will complement a number of measures already in place — including mandatory mask-wearing for all passengers and staff, enhanced cleaning protocols and physical distancing in airports.

Some Canadian airlines already have introduced temperature screening measures on their own. Air Canada became the first North American airline to announce the measure in May.