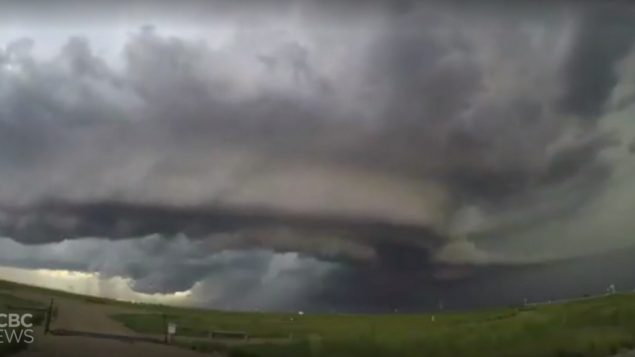 Menacing storm clouds like this rolled across southern Alberta on the weekend, followed by massive hailstones,, tornadoes, and heavy rain (CBC news)

Things were looking fairly good this season for farmers across a large area of southern Alberta, Then came the weekend.

A ‘monster’ hail storm, with some funnel clouds seen, tore across the prairie province destroying crops, many of them entirely. Many areas reported high winds with the Rothney Observatory about 30 kilometres southwest of Calgary near Priddis recording winds up to 128 km/h and heavy rain, with Calgary getting over 50mm in a 24-hour period 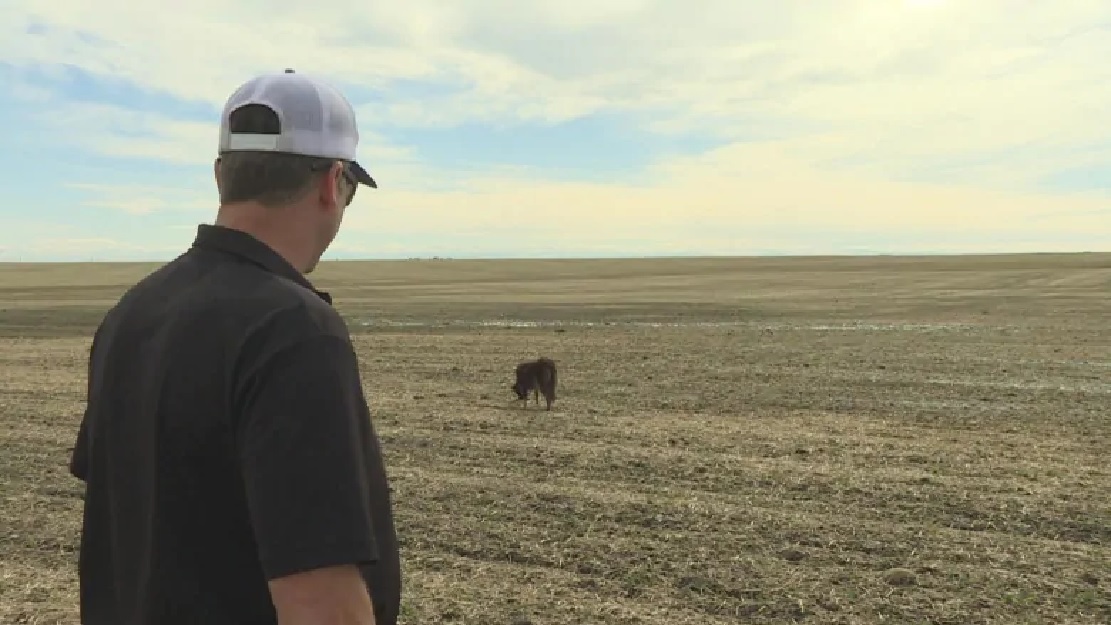 Framer Mike Sawyer with his dog survey what should be a vast xtanding field of young green canola, wheat and barley, all pummelled by the heavey hail and rain, (David Gilson-CBC)

Matt Sawyer has a 1,600 hectare farm planted with wheat, barley and canola located about 90 kilometres northeast of Calgary. Quoted in the CBC he said, “It was a monster. It demolished everything in its path”, adding, “every single acre we farm was absolutely destroyed”

Reports of hailstones from several areas of the province told of sizes ranging from walnuts, to golfballs and bigger. One report near Duchess had hail up to 100mm. 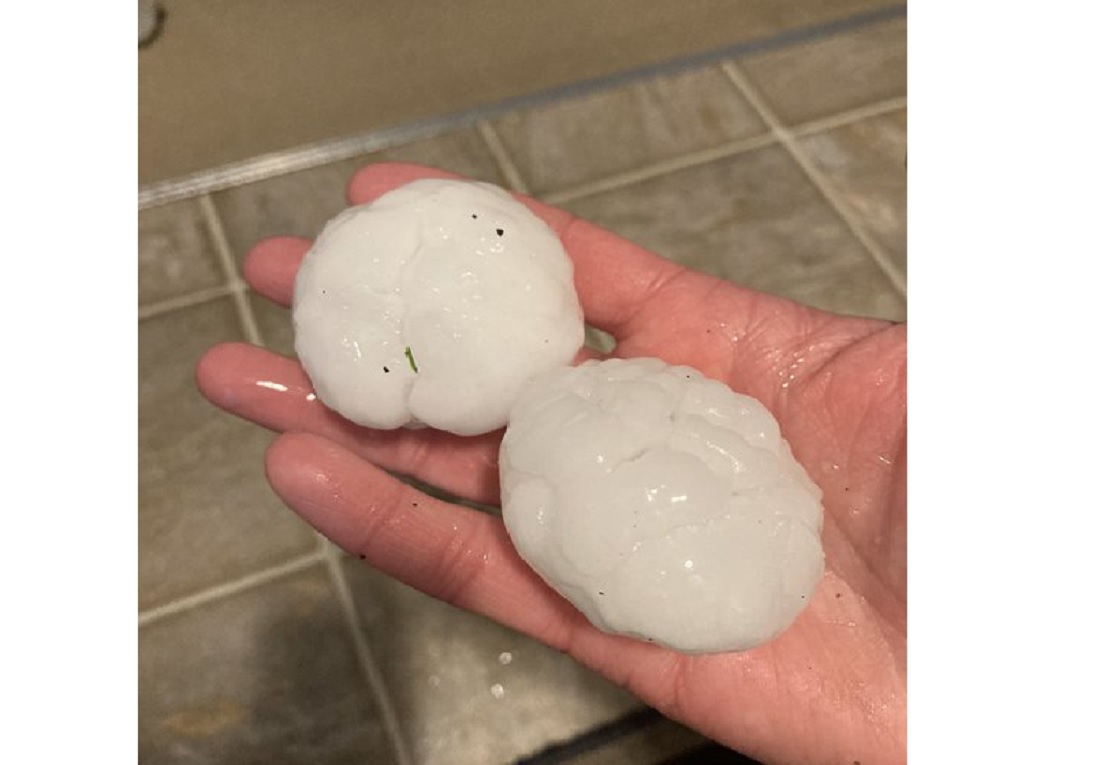 A meteorologist with Environment and Climate Change Canada estimated the hail was falling at speeds up to 100 km/h,, with most areas reporting hail from 20mm to over 50mm in diameter.. 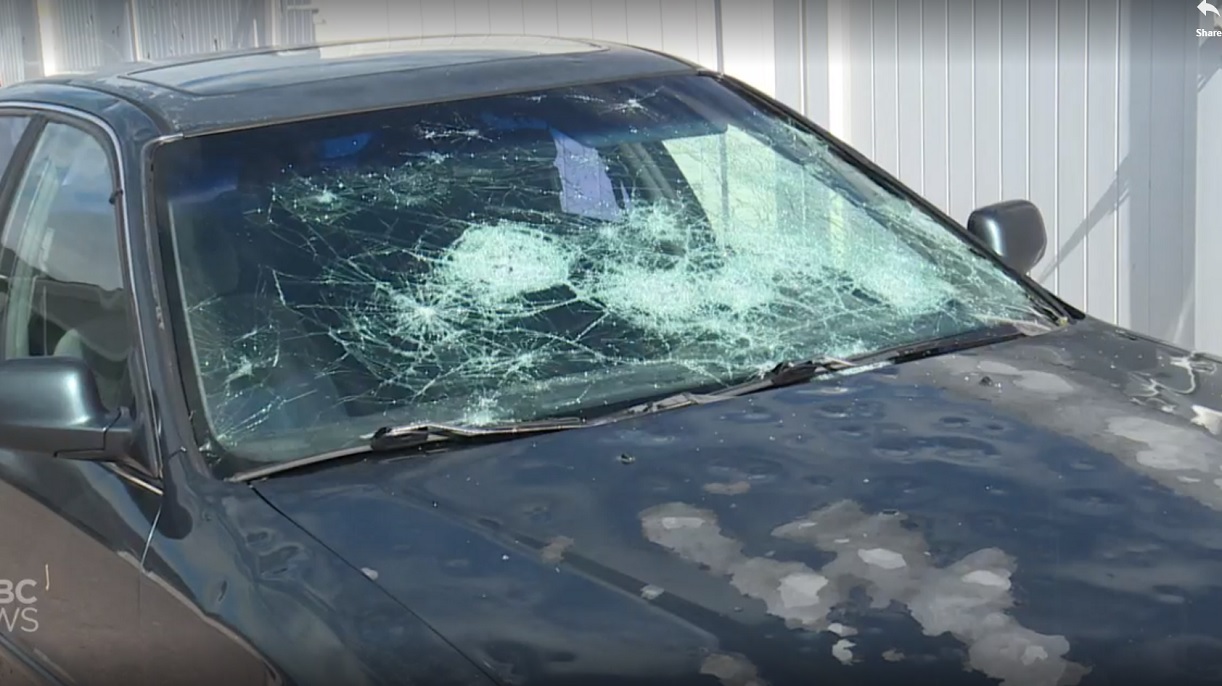 Thousands of cars suffered smashed windows and severe denting, Many will be “written off” by insurance companies as too expensive to repair (CBC News)

A corn and potato farmer in Barnwell about 250 kilometres to the south and east of Calgary said he lost about half his corn and about 30 per cent of the potatoes. In urban centres houses and cars were pummelled leaving massive dents in vehicles, destroying the siding on houses, and breaking windows in both. 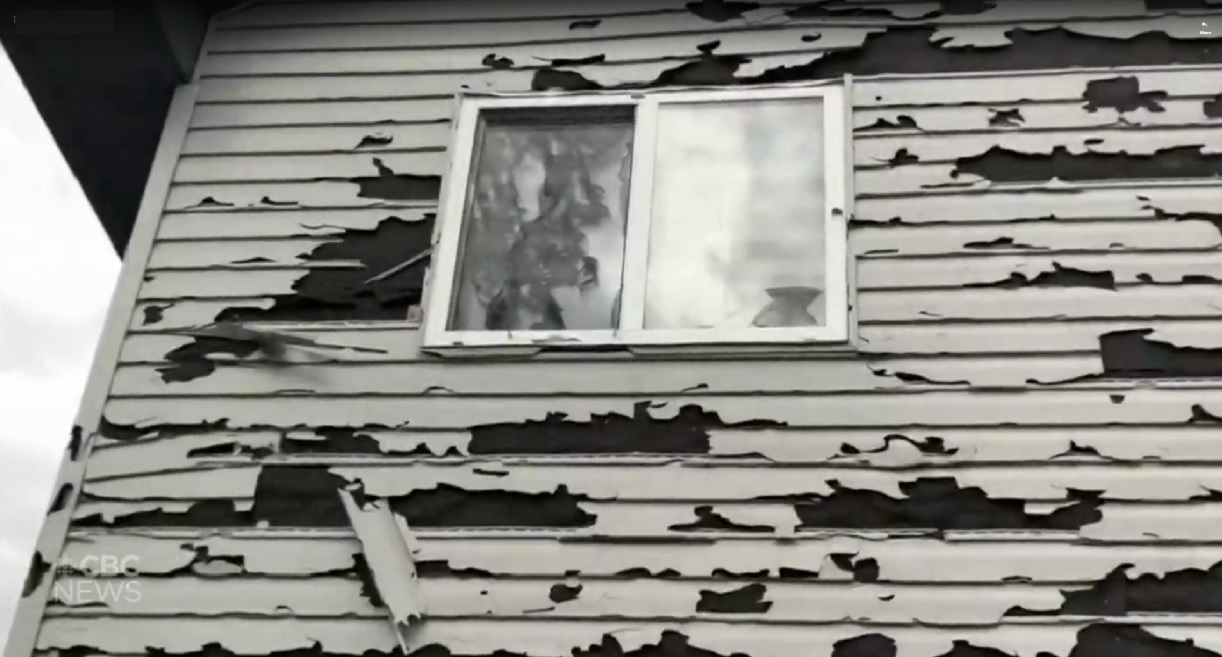 Although most  farmers have crop insurance, Michel Camps told Lethbridge News that “As farmers when we grow crops, of course we need to make a living, but at the end I want the crops. I don’t want the insurance money I want the crops. We spend so much time and energy in getting the crops seeded and getting the ground fertilized, just to see it get wiped away in a matter of minutes, it’s definitely heartbreaking”.

Insurers are out and extremely busy as they try to tally up damage. Calgary Mayor Naheed Nenshi estimated damage at $1 billion or more. His own home was among the many thousands damaged by the hail.