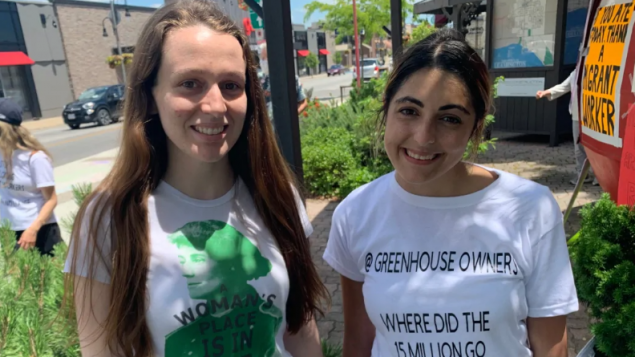 Marchers turn out to support migrant workers in Ontario

A backlash against what’s happening to temporary foreign farm workers in Ontario appears to be building.

The province has reported hundreds of cases of COVID-19 among the migrant workers as the virus continues to spread because of what advocates say are unsafe working conditions and overcrowded housing.

Three of the workers have died.

The most recent was Juan Lopez Chaparro, a 55-year-old father of four who died last weekend in a London, Ont., hospital, after becoming ill with COVID-19 in mid-May. Lopez Chaparro had been coming to Canada since 2010 to work on area farms.

Advocates for migrant farm workers blame lax safety protocols and poor living conditions for COVID-19 outbreaks and want the federal and provincial government to do more to improve the situation.

The deaths and the illnesses prompted demonstrators to move to the streets of Leamington, Ont., Sunday to draw attention to migrant workers’ conditions.

The demonstraions came as the the Windsor-Essex County Health Unit reported 98 new cases of COVID-19 in the area with 96 of them among farm workers.

The CBC’s Jacob Barker reports that In the morning, a caravan of vehicles drove past different farming facilities in the region, honking to show support to the workers and bring attention to the issues they are facing. The drive-by rally was organized by Justice for Migrant Workers.

“We see their working conditions [and] how they’re living and we hope that with the number of people that came out that the government will do something to protect the workers instead of having them shipped back in body bags.”

A second march that began in downtown Leamington made its way to the front of the Lakeside Produce facility where it was met by security.

The group called for mandatory testing.

“They’re saying no [to testing] because they know that if they test positive, they’re going to be sent back to Mexico,” organizer Mary-Catherine Croshaw said.

The group also called for better living conditions for workers.

“There’s multiple, like 10 to 12 people, living in one house and, like, six men living in one room and they’re all sharing a washroom,” Vanessa Gaspar told Barker.

“How are we supposed to stop the spread of that if they can’t have proper housing?”

The crowd also chanted “Status now,” a demand that the federal government give workers a path to permanent residency. They also want better wages and benefits for the workers. 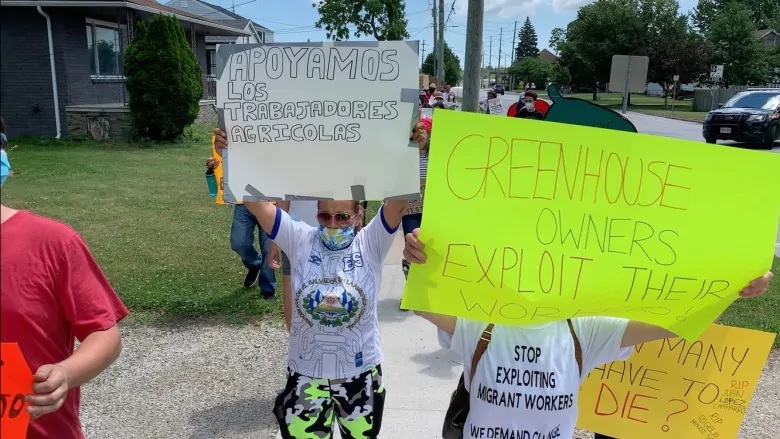 In March, the federal government flirted with barring temporary workers.

The late arrival on farms of many of the workers because of quarantining regulations set the industry back and in April Ottawa announced $50 million in funding to offset added costs.

Earlier this month, Mexico announced it was banning workers from coming to Canada, a decision it later rescinded after Ottawa and Mexico City “reached an agreement to improve the sanitary conditions of the nationals who work on farms.”

Last week, Canada’s largest support group for migrant workers issued a plea to the federal government and the Province of Ontario to reverse a decision that allows positive asymptomatic COVID-19 farmworkers to continue to work.

The Migrant Workers Alliance for Change said it was “horrified” by the move, saying  the action “jeopardizes public health” and creates an “unsafe workplace.”

“Ontario has responded to three farmworker deaths by signing a death warrant for more migrant workers,” executive director for the alliance Syed Hussan said in a statement.