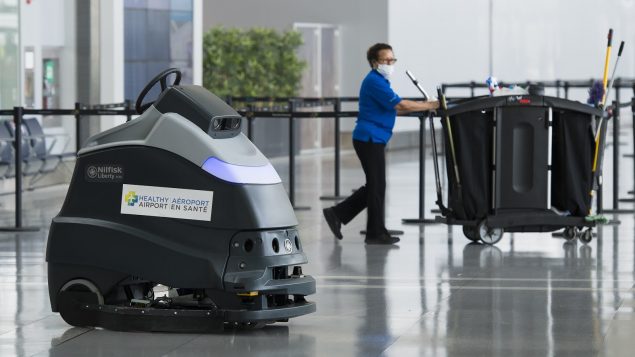 The operator of Canada's largest airport says it's cutting the size of its workforce by 27 per cent due to a reduction of traffic at Toronto Pearson Airport. An automated floor cleaner that sanitizes the floor is shown at Toronto's Pearson International Airport during the COVID-19 pandemic in Toronto on Tuesday, June 23, 2020. (The Canadian Press/Nathan Denette)

The operator of the Toronto Pearson International Airport, Canada’s largest airport, announced on Tuesday that it is reducing 27 per cent of its workforce due to a significant decrease in global air traffic because of COVID-19, according to a press release.

The Greater Toronto Airport Authority (GTAA), which operates the airport, said that it will be eliminating about 500 jobs, which includes 200 positions that are currently unfilled, and 300 positions through layoffs and voluntary departures.

“This reduction in force is a difficult but necessary step, and one that we take with great sadness,” Deborah Flint, the president and chief executive officer of the GTAA, said in a statement. “The leadership team and I are deeply grateful for the contributions of our employees, each of whom has been part of the success and legacy of the GTAA.”

“We are dedicated to treating everyone with the greatest respect and consideration throughout this process,” Flint added.

The GTAA said that they are working with the Unifor union and the Pearson Airport Professional Fire Firefighters Association to implement the changes and to respect the terms of the collective bargaining agreements.

The COVID-19 pandemic has had a negative impact on the global air travel industry, and the GTAA said that they do not expect flight activities to return to pre-COVID-19 levels for at least three to five years.

According to the press release, in April 2020 passenger numbers at the Toronto Pearson airport fell by 97 per cent when compared to April 2019.

The reductions come into effect today and departures will extend through fall 2020.