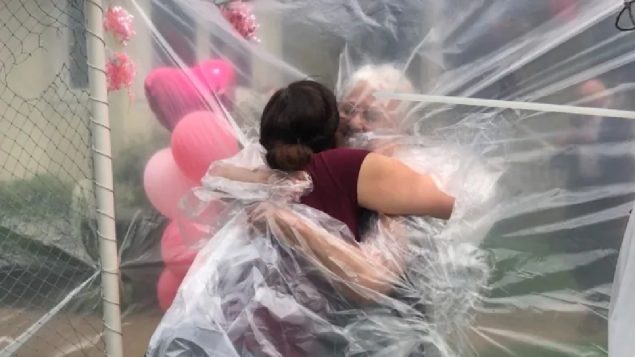 Unusual times call for unusual measures. This month Cristi Cooke in Kelowna B.C. wanted to safely give her mother a Covid-risk-free hug on her 80th birthday and came up with a giant plastic screen. A new survey says most Canadians are not quite ready for a return to 'normal' activities. (Brady Strachan/CBC)

Conducted in early July and released today, a survey shows Quebeckers most likely to return to giving handshakes and hugs within the next six months in spite of being the hardest hit by the coronavirus.

Asked of Canadians in each province the responses ranged from a low of 40 per cent in Ontario to a high of 43 per cent in Quebec.

Leger Marketing survey for the Association of Canadian Studies (july 3-5, 2020)

Quebeckers were also the most likely to want to return to sporting event, concert or play within six months (16%), while Ontario respondents, (the other province hardest hit by COVID) was the lowest at eight per cent.

Another poll by Leger for the ACS conducted July 10-12, showed some very strong opinions about controls around COVID restrictions.

Regarding mask wearing, a clear majority said governments should make masks mandatory in public spaces and that they would wear masks if made mandatory, for example in grocery stores, 90 per cent said they would comply.

Another high percentage disagreed that obligatory mask wearing was an infringement on rights (70%) and that it would be one’s civic duty to do so (84%).

People generally also agreed that police should have the right to fine or arrest people who didn’t wear masks where mandatory (68%) and also arrest of fine those who don’t respect social distancing (62%);

It also seems more people are still afraid of contracting the virus than not with 59 per cent somewhat to very afraid, and 40 per cent having little or no fear of the disease.

As to the ‘return to normal’ most thought it would take some time still before that can happen, (58%), while nine per cent said life will return to normal, however a significant group (32%) felt that life would never return to the normal we knew.

As an interesting addition, a survey in April by the Angus Reid Institute found that 45 per cent of respondents to that poll indicated one of things they were most eager to do when the pandemic risk passes was to giving someone a big hug.