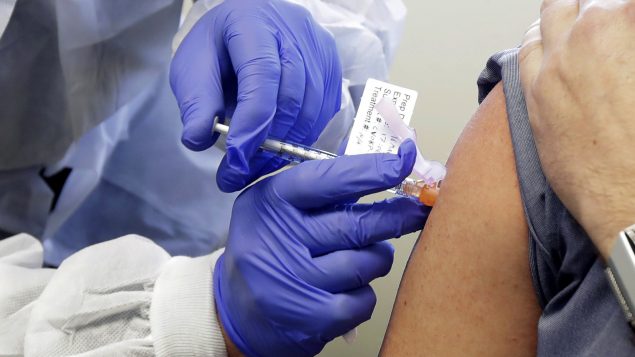 FILE - In this March 16, 2020 file photo, a subject receives a shot in the first-stage safety study clinical trial of a potential vaccine by Moderna for COVID-19, the disease caused by the new coronavirus, at the Kaiser Permanente Washington Health Research Institute in Seattle. (Ted S. Warren/AP Photo, File)

Russia is denying claims by Canada, the U.K. and the U.S. that its intelligence services were behind a group of cyber hackers that tried to steal research into a possible vaccine for the virus that causes COVID-19.

Kremlin Spokesman Dmitry Peskov told reporters on Friday that Russia “certainly has nothing to do with” with the alleged attempts by hackers to target researcher centres in Canada, Britain and the U.S. working on COVID-19 vaccines.

“We continuously confront attempted cyber attacks against our computer databases, and those of our departments,” the Russian TASS news agency quoted Peskov. “Our agencies regularly repel such attacks, since it is a common problem. We strongly reject these groundless accusations against us.”

Peskov’s comments came a day after electronic spy agencies in Canada, the U.K. and the U.S. issued a joint statement saying that a hacker group that “almost certainly operates as part of Russian intelligence services” tried to steal COVID-19 related research in all three countries.

The Communications Security Establishment (CSE), Canada’s foreign signals intelligence agency, and its U.K. and U.S. counterparts identified the hacker group as APT29, which was also accused of hacking the Democratic National Committee before the 2016 U.S. election.

“CSE assesses that APT29, also named ‘the Dukes’ or ‘Cozy Bear’ was responsible for this malicious activity, and almost certainly operates as part of Russian intelligence services,” the signals intelligence agency said in a statement on threat activity released Thursday. 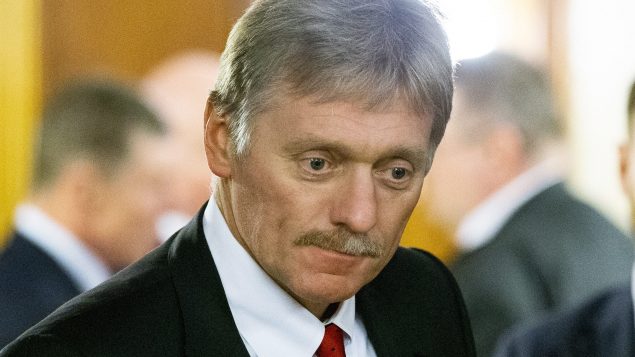 Peskov denied any ties to the hacking group.

“We know absolutely nothing about the group and who it is affiliated with,” he said.

Russia has its own vaccine ‘the most efficient in the world’

In an interview with the Financial Times newspaper Kirill Dmitriev, chief executive of the state-run Russian Direct Investment Fund (RDIF), dismissed the allegations as “unsubstantiated and frankly, strange.”

Dmitrierv told the Financial Times that these allegations by Canadian, U.K. and U.S. intelligence agencies are “an attempt to derail the success of the Russian vaccine, which we believe will be the first possibly in the world and the most efficient in the world.”

Dmitriev said there was no need for Moscow to steal any information about the British vaccine that is being tested by Oxford University because AstraZeneca, the UK-based pharmaceuticals company that is part of the development team, was about to sign a deal with an RDIF-owned drug company to manufacture it in Russia.

In the meantime, Russia is also in the advanced stages of testing its own vaccine, Dmitriev said.

“The Oxford vaccine will be fully transferred to Russia,” said Dmitriev. “[But] we believe that the Russian vaccine is better.”

However, Dmitriev warned that geopolitical tensions between the West and Russia might force countries to choose a vaccine based not on its merits, but on political expediency.

“Six months from now, we will be in a situation where a few countries will have vaccines, and we believe those countries will be the U.K., Russia, China and the U.S.,” Dmitriev told the Financial Times. “And basically other countries will decide … which vaccine to buy … and who do you trust?”