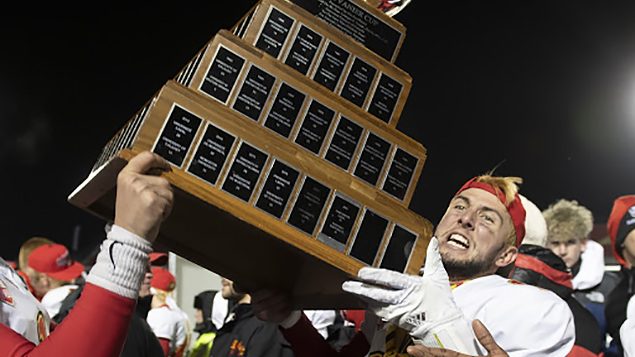 Calgary University Dinos Adam Sinagra raises the Vanier Cup after winning the U Sports Vanier Cup university football championship against the University of Montreal Carabins, in Quebec City on November 23, 2019. U Sports announced that it is making an exception to its age policy so that football players that are currently 24 years old do not lose their final year of eligibility due to the COVID-19 pandemic. (The Canadian Press/Jacques Boissinot)

U Sports, the national brand of university sports in Canada, announced that it is making an exception to its age policy so that football players that are currently 24 years old do not lose their final year of eligibility due to the COVID-19 pandemic.

University football in Canada has a policy that requires players be 24 years old or younger before Sept. 1 each year to be eligible to play in the season. With the 2020 season cancelled because of the pandemic, players entering their last year of eligibility this year would have not been able to play next year because they would have turned 25.

However, in a press release on Monday, U Sports said that they are providing a one time exception to that policy to allow all current eligible athletes to participate in the 2021 football season.

“After discussions with our membership, we have determined that it’s an appropriate time to explore ways to improve the current safety and participation policies in football with an anticipated completion date of February 2021,” Dick White, the U Sports interim chief executive officer, said in a statement. “Although there are many negative impacts of the COVID pandemic, there are also opportunities to make some changes.”

U Sports originally made a ruling, earlier this month, that said they would not change its eligibility rules but changed its course.

U Sports also announced that they are starting a consultation process with its member universities to review all of its football eligibility policies.

In June, U Sports decided to cancel six of its national championships for the 2020 fall season, including the Vanier Cup, which is the Canadian university football championship game.

With files from CBC Sports, Devin Heroux, The Canadian Press and Donna Spencer