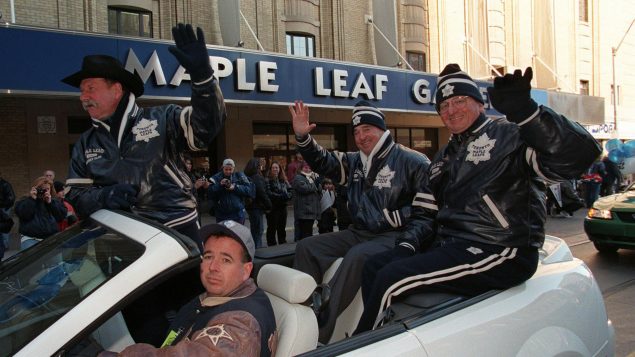 A car carrying Toronto Maple Leaf alumni Eddie Shack, left to right, Frank Mahovlich and Jim Pappin passes by Maple Leaf Gardens in Toronto in a parade to the Leafs new arena, The Air Canada Centre, on February 19, 1999. Eddie Shack, one of the NHL's most colourful players on and off the ice, has died. He was 83. (THE CANADIAN PRESS/Kevin Frayer)

Eddie Shack died over the weekend.

For Canadians of a certain age, he’s a guy you don’t soon forget.

Shack, nicknamed The Entertainer, played his final National Hockey League game in 1975 in the hell bent for leather style that marked his era.

Professional hockey was way different then.

Players came from faraway places–some romantic to our minds, some, not so much.

The Maple Leafs are deeply saddened by the passing of Eddie Shack.

A three-time all star and four-time Stanley Cup champion, Eddie entertained Leafs fans on the ice for nine seasons and for decades off of it. He will be greatly missed.

Our thoughts are with his family. pic.twitter.com/vMz0pznuNv

Prairie farms and mining towns. (Shack was from Sudbury, Ontario, a place whose geography more than a few have compared as the closest to the moon on Planet Earth.)

Places many of us had never heard of until they were attached to the name of a player we decided to like–or hate.

For up to 1968, this was the old Six Team League, where we pretty much knew the whole 120 players.

They sported crew cuts (at least until the mid ’60s) and had large gaps where their teeth were supposed to be.

They wore no helmets or facemasks. (Heck, when Shack broke into the NHL in 1958, GOALIES didn’t even wear masks.)

Hockey was king in Canada in those days.

There was no Major League Baseball, no National Basketball Association competing for sports section ink.

Not even any smartphones.

That’s all changed now, of course.

We are about to find out just how much.

The romantic view holds that the game’s soul was born on Canada’s outdoor ponds and frozen-over rivers.

“Choose up sides and let’s play!”

Spectators were welcome but certainly not a necessity.

Cheers were generated inside a kid’s head if he happened to score.

He could hear them again that night back home in bed that night.

A COVID-19 outbbreak notwithstanding, the NHL playoffs begin next weekend in Edmonton and Toronto under a never-seen-before formula agreed to by the league and its players.

Twelve teams each will gather in the two cities in so-called bubbles to prevent the spread of COVID-19.

The players began checking in at their hotels yesterday for an extravaganza that involves LED screens and monitors and stages and lots of crowd noise.

But here’s where we flash back to those ponds and rivers.

There will be no paying spectators in the stands; any crowd noise will be digital.

Which leaves the game itself–pure as the driven flurries on that pond and lake–though the NHL says it wants to create something akin to what we’ve been watching on the tube for years.

Will the TV audience be able to plough through the digital light shows and jacked up (and fake) crowd noise and just focus on the game?

From a distance, it seems kind of pure: a bunch of hockey players sitting around and hanging out, waiting to get a game at the local rink-just like they did when they were kids at the pond–when Eddie Shack was a kid 80 years ago.

With files from CBC, RCI, The Canadian Press, The Associated Press,