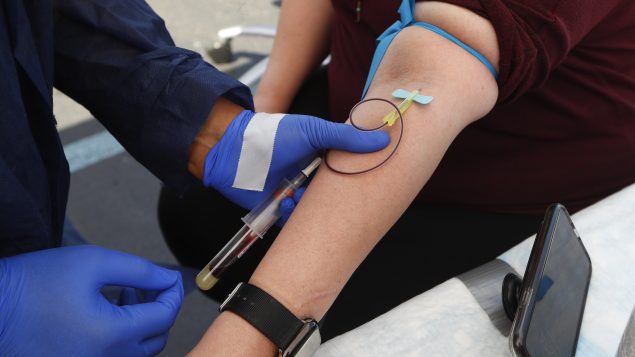 FILE - In this Friday, June 12, 2020 file photo, a woman has blood drawn for COVID-19 antibody testing in Dearborn, Mich. A blood donor seroprevalence study, conducted by Héma-Québec in collaboration with the Institut national de santé publique (INSPQ), reveals that 2.23 per cent of blood donors in the province were infected with the coronavirus. (Paul Sancya/AP Photo)

A blood donor seroprevalence study, conducted by Quebec’s blood and tissue collection agency in collaboration with the provincial public health institute, shows three times as many Quebecers could have been infected with the novel coronavirus than what the official numbers suggest.

The study by Héma-Québec and the Institut national de santé publique (INSPQ) showed that 2.23 per cent of blood donors in the province were infected with the coronavirus that causes COVID-19.

The Quebec study analized blood samples from 7,691 people aged 18 to 69 who donated blood between May 25 and July 9 for the presence of antibodies produced by the immune system as it fights the coronavirus.

Based on the results, the study extrapolated that about 124,880 people in that age group had contracted the virus since the beginning of the pandemic, Héma-Québec said Wednesday in a press release.

That is more than three times higher than the number of officially diagnosed cases of COVID-19 in the province among in that age group for the same period.

Quebec’s Health Ministry had recorded about 37,000 COVID-19 cases in the province at the time. As of Wednesday morning Quebec, Canada’s hardest hit province, had 60,000 cases of COVID-19 and 5,687 deaths due to the illness.

The study by Héma-Québec and INSPQ also suggests that the prevalence of COVID-19 in Quebec is at least two times higher than in neighbouring Ontario and in the rest of Canada.

A study analyzing blood samples collected in Ontario in June suggested that 1.1 per cent of the province’s population had been infected.

A national study of blood samples conducted by Canadian Blood Services and Canada’s COVID-19 Immunity Task Force in July found that fewer than one per cent of samples had COVID-19 antibodies.

Montreal and Laval have the highest rates

Not surprisingly the antibody prevalence study by Héma-Québec found that the Montreal and Laval regions – the hotbeds of the coronavirus outbreak in Canada – had the highest prevalence at 3.05 per cent.

The study also showed that the province’s Mauricie-Centre-du-Québec region, which had a reported COVID-19 rate that was three times lower than in Montreal or Laval, nevertheless had an almost identical seroprevalence of 2.96 per cent.

As for the rest of Quebec (excluding Montreal and its surrounding areas), seroprevalence was much lower at 1.29 per cent.

The study analysed blood samples collected from participants in 12 of the 18 health regions of Quebec.

The remaining six regions were not included since there was no blood collection during the recruitment period.

These blood donors comprised a representative group of the general population, Héma-Québec said in a press release.

The 173 donors in whom antibodies were detected will be contacted to document their symptoms and the possible source of infection, the agency said. An equivalent number of donors with negative test results will also be questioned, it added.

This process will help estimate the percentage of infected people who were asymptomatic, the blood collection agency said.

In order to continue monitoring the evolution of COVID-19 in Quebec, the study may be repeated on a regular basis until the end of the pandemic, Héma-Québec said.