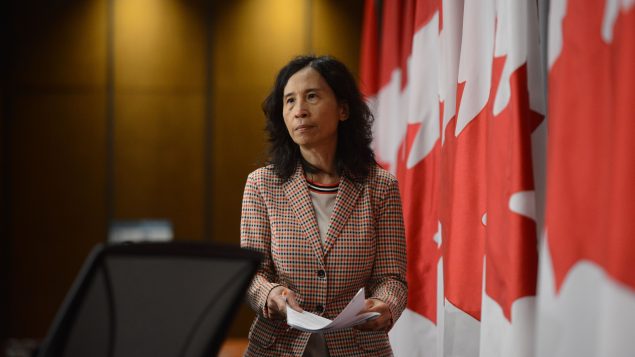 COVID-19 in Canada is ‘under manageable control,’ says top doctor

Canada’s Chief Public Health Officer Dr. Theresa Tam says the spread of the COVID-19 pandemic is “under manageable control,” but warns Canadians to not let down their guard as the virus is still circulating in the country.

There have been 120,844 cases of COVID-19 in Canada, including 9,006 deaths, Tam said Thursday. On a brighter note, 89 per cent of infected people have now recovered, she added.

Labs across Canada have tested 4,581,083 people for COVID-19 to date. Over the past week, an average of 43,000 people were tested daily, with 1 per cent testing positive and an average of 376 new cases reported daily from across the country.

Case counts peaked in late April and early May at close to 1,800 cases reported daily and then declined steadily reaching a low of 270 cases per day in early July.

COVID-19 transmission has increased recently as provincial governments across Canada began lifting some of the pandemic restrictions, Tam said. Over the last several weeks, national daily case counts are averaging between 350 to 500 cases, she added

“Fortunately, the number of new deaths reported daily has remained low following a steep decline from the peak in early May when close to 200 deaths were reported daily,” Tam said. “Fewer than 10 deaths have been reported per day on average over the last four weeks.”

The number of hospitalizations and people requiring critical care also remain low across most jurisdictions with fewer than 400 individuals in hospitals and fewer than 100 patients in critical care across the country on any given day over the last several weeks, Tam said.

However, the average number of days between the date a person became ill and when they submitted a sample for laboratory analysis has increased slightly from 2.8 days in June to 3.2 days from July 1 to 20, she said.

“Although this is a very small increase, this is a trend to monitor closely because the speed of case detection is critical to keeping rates of transmission low,” Tam said. “The sooner a case is detected, the sooner the individual can be isolated and their contacts traced and quarantined to prevent further spread.”

The number of coronavirus infections globally reached over 20.7 million with at least 751,399 deaths caused by the disease, according to the tally kept by Johns Hopkins University.