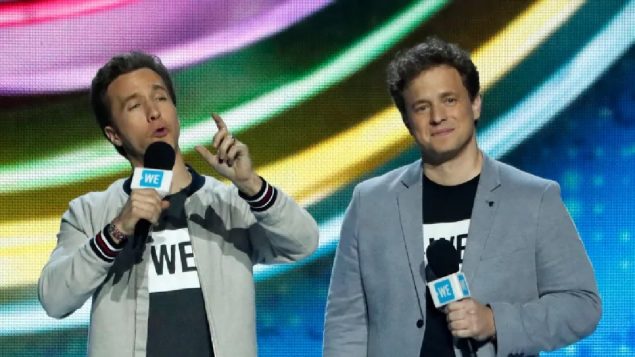 Co-founders of the WE Charity and Me to We company, Craig (left) and Marc Kielburger (right) are seen on stage during WE Day California in Inglewood, California, U.S. April 25, 2019. In light of the turmoil surrounding the government contract, and sponsors cutting ties, with the Charity both it and the ME to WE company are said to in a process of 'refocus' and are laying off staff and examining a possible sale of some of their real estate holdings (Reuters)

Political turmoil over WE Charity results in layoffs, property sale

The political turmoil over the WE Charity contract rocking the Liberal government of Justin Trudeau is also rocking the charity organisation.

The so-called scandal involves the awarding of a multi-million dollar contract to the charity to administer a federal student funding programme. The contract was sole-sourced with the approval of Trudeau and Finance Minister Bill Morneau both of whom have had family members paid by or employed by the charity.

While the situation is now the subject of two Parliamentary committee investigations and another by the federal ethics commissioner, the charity itself is now in trouble.

As a result of the situation involving the WE Charity and affiliated ME to WE company, many of the charity’s sponsors have cut ties with the organisation and today the Canadian Press noted that over 80 employees in the Canadian operation will be laid off or not have contracts renewed when they expire at the end of the month. Another 19 employees in the U.K. operation will also be cut.

The charity also announced it was cutting all corporate and schoolboard partnerships after many had already begun distancing themselves from the organisation.

WE Day events have been cancelled, as executives say the organisation is seeking to ‘refocus’ its activities.  That includes potential sale of properties in downtown Toronto, although the main headquarters building would be retained.

The original contract for the charity to administer the student ‘volunteer’ funding programme was for up to $43.5 million, of which $30 million had already been paid.  With the political scandal mounting, WE quickly backed out of the contract on July 3.

The charity says it has returned $22 million of the funds and is waiting on the government in order to return the remainder.

Categories: International, Politics, Society
Tags: Canada, ME to WE, scandal, WE