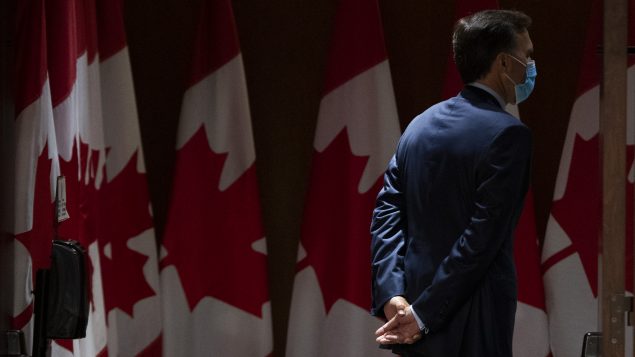 Minister of Finance Bill Morneau leaves after walking into the room before staff were ready, ahead of a news conference where he is expected to announce his resignation, on Parliament Hill in Ottawa, on Monday, Aug. 17, 2020. (Justin Tang/THE CANADIAN PRESS)

Canada’s Finance Minister, Bill Morneau, said Monday he will be stepping down from the cabinet and resigning his seat in the House of Commons to pursue the job of secretary general of the Organisation for Economic Co-operation and Development (OECD).

Morneau’s resignation came amid reports of policy clashes with Prime Minister Justin Trudeau over the country’s ballooning deficit and a potentially damaging ethics investigation over their handling of a multi-million-dollar federal student grant program.

“I met with the prime minister today to inform him that I did not plan to run again in the next federal election,” Morneau told reporters Monday evening at a press conference in Ottawa.

“It has never been my plan to run for more than two federal election cycles.”

Morneau, who has held the post for five years, denied he was pushed to resign by Trudeau.

Morneau said Canada faces a “long and challenging recovery” from the worst economic downturn in modern Canadian history and Trudeau deserves to have a finance minister who will be there for the long haul. 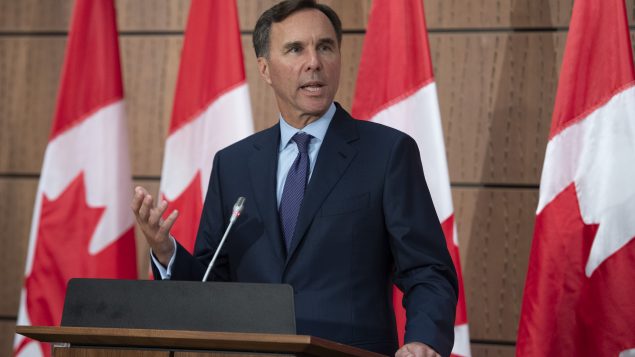 Grilled by reporters over reports of policy clashes with Trudeau, Morneau said vigorous debate around the cabinet table was necessary and welcome.

“Under his leadership, Canada developed a strong economy with one of the best balance sheets in the G7, created over one million jobs, achieved the lowest unemployment rate in recorded history, lifted over one million people out of poverty, and created a coherent plan to protect the environment while growing the economy,” Trudeau said in a statement.

“I want to thank Bill for everything he has done to improve the quality of life of Canadians and make our country a better and fairer place to live. I have counted on his leadership, advice, and close friendship over the years and I look forward to that continuing well into the future.”

Canada will “vigorously support” Morneau’s bid to lead the OECD, which “will play a critical role in the global economic recovery,” Trudeau added.

Morneau has been under pressure to quit ever since it was revealed that he had forgotten to repay over $41,000 in travel expenses covered for him by WE Charity, the domestic and international organization at the heart of a political scandal that has hamstrung Trudeau’s minority Liberal government.

Both Trudeau and Morneau are being investigated by Canada’s ethics and conflict of interest watchdog over their handling of the Canada Student Service Grant (CSSG).

Both men have admitted that they should have withdrawn from cabinet discussions on the awarding of the contract to administer the $912-million program to WE Charity given their close family ties to the non-governmental organization.

It emerged that Trudeau’s mother and brother have been paid hundreds of thousands of dollars over the years for their speaking engagements at WE Charity events and his wife co-hosts a wellness podcast produced by the charity.

One of Morneau’s daughters works at the charity, while the other had volunteered for it.

Trudeau has denied doing anything to influence the awarding of the contract to WE Charity, insisting that it was the choice of the independent public service and he knew nothing about it until he was briefed on it shortly before a cabinet meeting in May.

“I wish that, in hindsight, that we had done things differently around the WE Charity,” Morneau said Monday.

Outgoing Conservative Leader Andrew Scheer said that Morneau’s departure from cabinet was an effort to scapegoat the finance minister in order to save the prime minister.

“Bill Morneau’s ‘resignation’ is further proof of a government in chaos,” Scheer wrote on Twitter. “At a time when Canadians are worried about their health and their finances, Justin Trudeau’s government is so consumed by scandal that Trudeau has amputated his right hand to try and save himself.”

Bill Morneau’s “resignation” is further proof of a government in chaos.

At a time when Canadians are worried about their health and their finances , Justin Trudeau’s government is so consumed by scandal that Trudeau has amputated his right hand to try and save himself. 1/3

New Democratic Party Leader Jagmeet Singh said Morneau’s move is about trying to put a new face on the Liberal government and not about the finance minister seeking new challenges.

“In the middle of a financial crisis, Justin Trudeau has lost his finance minister. Every time he gets caught breaking ethics laws, he makes someone else take the heat that’s not leadership,” Singh wrote on Twitter.

Canadians need a government that is focussed on helping them

Not on their own scandals

In the middle of a financial crisis, Justin Trudeau has lost his Finance Minister

Every time he gets caught breaking ethics laws, he makes someone else take the heat