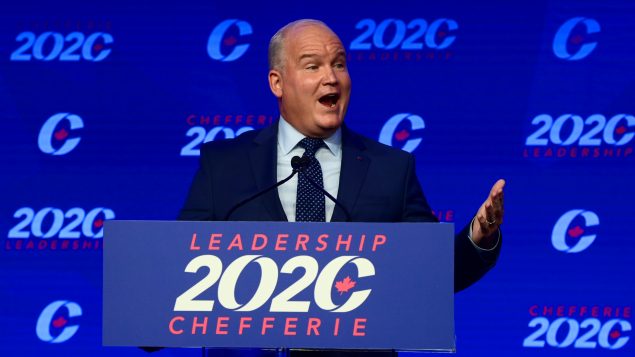 Erin O’Toole, who ran most of the race just off the pace set by party heavyweight Peter MacKay, has won the leadership of the Conservative Party of Canada, the country’s Official Opposition. 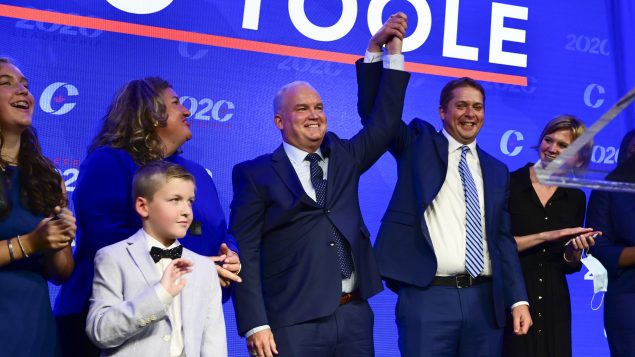 After three rounds of counting, O’Toole emerged the victor with 57 per cent of the vote early Monday morning over MacKay, who won 43 per cent.

O’Toole, who is 47 and a former minister of veterans affairs in Stephen Harper’s cabinet, takes over over from Andrew Scheer, who resigned last December after the party failed to unseat Justin Trudeau’s’ Liberal Party government in last fall’s general election that saw the Tories win a higher percentage of votes (34.34% to 33.12%) than the Liberals but fewer seats (121. Vs. 155). 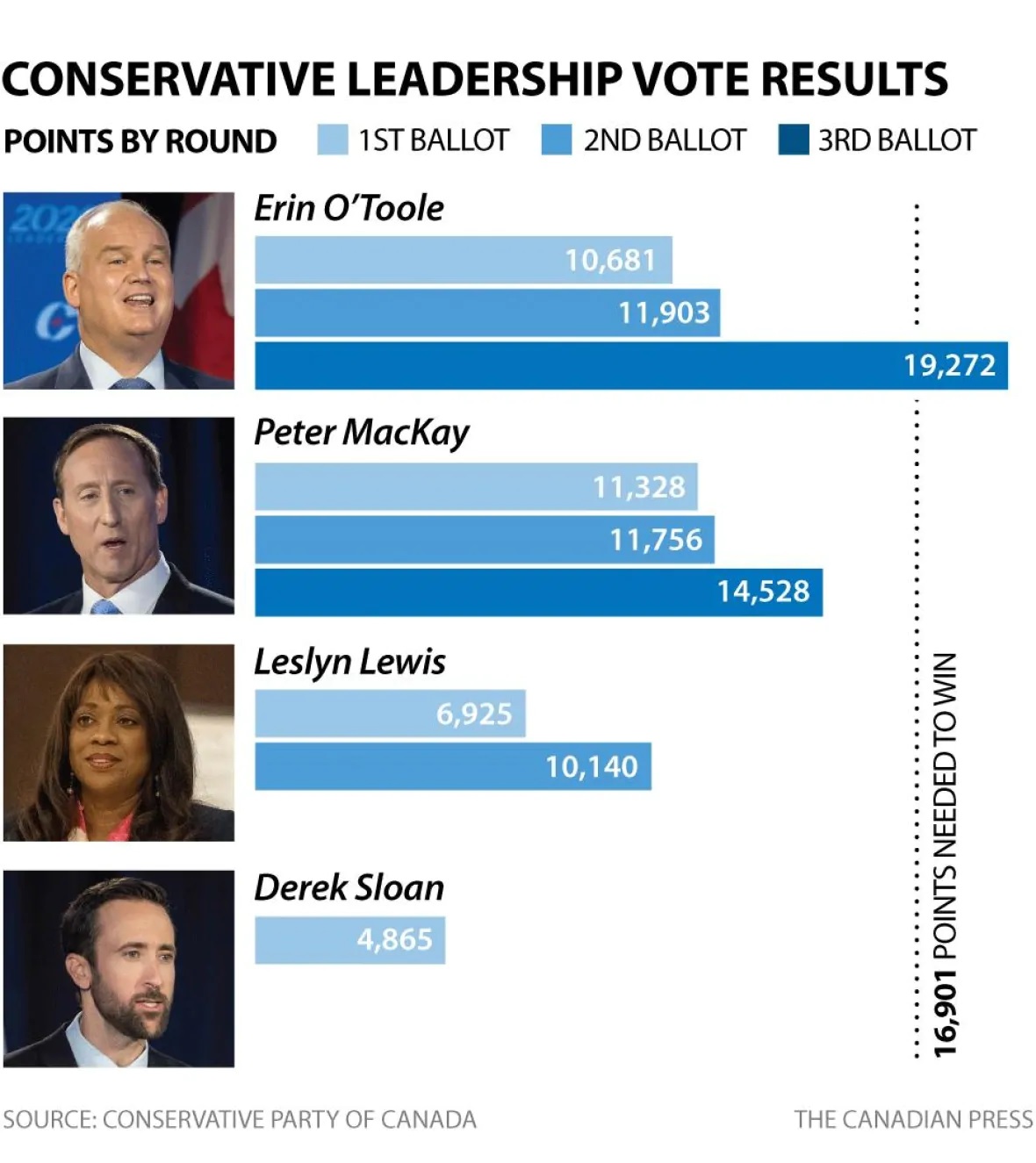 The leadership race was supposed to end with a convention in Toronto in June but was delayed by COVID-19.

Things did not go much better Sunday at a hybrid convention when volunteers ran into problems opening envelopes containing several thousand of 175,000 ballots sent in by mail–ballots they had been collecting for weeks.

WATCH / How the Conservative leadership ballots are counted:

Conservative Party officials said the envelope-opening machines sliced through “a few thousand” ballots during the counting process delaying the announcement of a winner.

As the delay continued, a small convention room in downtown Ottawa was converted to a broadcast studio, where race organizers and outgoing leader Scheer were scheduled to give speeches, while the four candidates remained in their own rooms to await the results.

Where the Tories go from here remains to be seen and O’Toole went out on no limbs in his acceptance speech following his victory.

“Canada can and must do better and Conservatives will work hard to earn the trust and confidence of Canadians in the next election,” he said.

Congratulations to @ErinOTooleMP on a hard-fought campaign. It’s now time for our @CPC_HQ party and movement to come together, and to focus on what’s most important: ensuring our country gets moving in the right direction again. https://t.co/caXJtIo2PY

“We must continue to point out Liberal failings and corruption, but we must also show Canadians our vision for a stronger, more prosperous and more united Canada,” he said.

“Canada can and must do better and Conservatives will work hard to earn the trust and confidence of Canadians in the next election.”

That election may not be all that far away.

The minority Liberals appear to many pundits to be vulnerable.

Parliament has been prorogued, the county has a new finance minister as it tries to grapple with the COVID-19 pandemic, and the prime minister is facing the so-called WE Charity scandal--a controversy that has all the makings of blowing up in his face.

The New Democrats, who hold the balance of power in the House, said last week they’re ready for a fall election campaign if necessary.

“We have fought elections on less … and done well,” McGrath said. 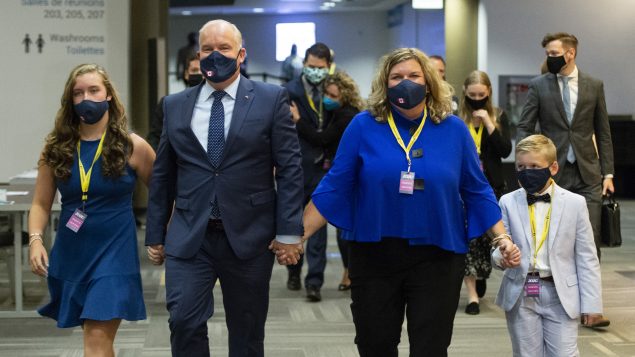 Erin O’Toole walks with his wife Rebecca, daughter Mollie and son Jack, after being announced as the new leader of the Conservative Party of Canada, in Ottawa early this morning. (THE CANADIAN PRESS/Justin Tang)

Now, the Official Opposition Conservative Party of Canada has a new leader–one who isn’t a lame duck.

O’Toole must now set about mending fences with MacKay and Lewis and find the proper places for them in the party hierarchy.

How he deals with Sloan, an avowed social conservative, is another matter, though O’Toole ran to MacKay’s right in the leadership campaign. 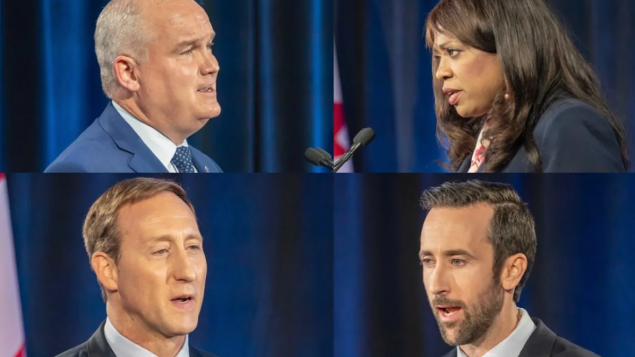 Sloan was nearly kicked out of caucus during the campaign after a furor around remarks he made about chief public health officer Dr. Theresa Tam.

As well, he’s also been outspoken on issues around abortion and LGBTQ conversion therapy.

Parliament is set to return on Sept. 23 with the speech from the Throne.

It’s anyone’s guess at this point what happens then.

The Liberals continue to hold the lead in public opinion polls despite the WE scandal and the CBC Poll Tracker still shows the Conservatives with less support today than they did in the last election.

As well, the CBC Poll Tracker’s Éric Grenier gives the Tories just a nine per cent chance of winning the next election.

With files from CBC News, The Canadian Press, RCI,