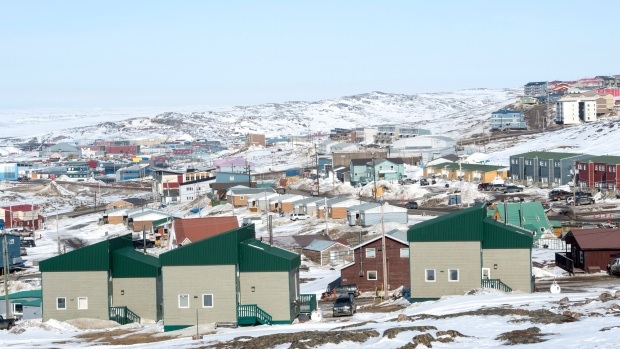 A scene from Iqaluit, Nunavut, on April 25, 2015. A new survey from Statistics Canada says that more than one-third of women in the northern territories have been subjected to unwanted sexual behaviour in a public place. (THE CANADIAN PRESS/Paul Chiasson)

A survey from Statistics Canada has found that more than one-third of women (35%) in Canada’s northern territories–Yukon, the Northwest Territories and Nunavut–have been subjected to unwanted sexual behaviour in a public place–roughly double what it was for men (16%).

The study, released Wednesday, found almost as many people had the same experience at work (31% and 16%) and about a quarter (24%) of women and 16 per cent of men had been targeted online.

More than 40 per cent of men and women who said they’d been targeted more than once said they had changed their behaviour as a result.

The survey found 41 per cent of women and 42 per cent of men said they avoided certain people or situations.

Non-gender-conforming people reported even higher figures: About 43 per cent of LGBTQ respondents said they had experienced inappropriate sexual behaviour.

“These behaviours stem from social norms, structures and beliefs that are similar to those which underlie sexual assault,” said statistician Adam Cotter.

″(The unwelcome behaviours) are still going to have considerable impact on whether or not you feel safe and comfortable in engaging in various parts of everyday life — just going out in public, walking on the streets, using libraries, bars, restaurants.”

“Women are far more disproportionately targeted by these behaviours than men.”

For both women and men, the perpetrator was most often a man acting alone.

“The vast majority of perpetrators are strangers,” said Cotter.

Overall, the study found the experience of women in Canada’s North is roughly on par with those in the provinces.

“We didn’t find any significant differences between the provinces and territories,” Cotter said.

Cotter said the study was part of a broader attempt by the agency to understand what makes cities feel safe, “making sure there’s data to support anecdotal evidence.”

With files from The Canadian Press, Statistics Canada