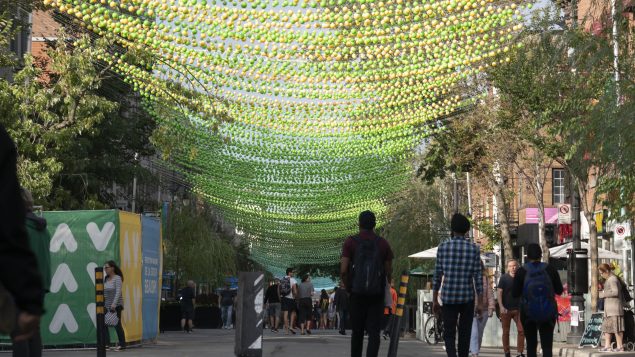 The art installation know as "18 Shades of Gay," is seen above Ste-Catherine street in Montreal's Gay Village in Montreal on September 3, 2019. The installation made up of 180,000 multicoloured plastic balls evoking the rainbow LGBTQ flag, was later dismantled and sold off in pieces to the public. (THE CANADIAN PRESS/Paul Chiasson)

Shocking statistics released about assaults against LGBTQ people in Canada

A new report from Statistics Canada paints a bleak picture of how gay, lesbian, bisexual and other minority people are treated in Canada.

The report shows that members of LGBTQ communities are nearly three times more likely than heterosexuals to experience sexual or physical assault.

Statistics Canada says the research is the first large-scale study of its kind to facilitate collecting information on the number of transgender and nonbinary Canadians.

The findings from a 2018 survey based on safety in public and private places are not pretty: 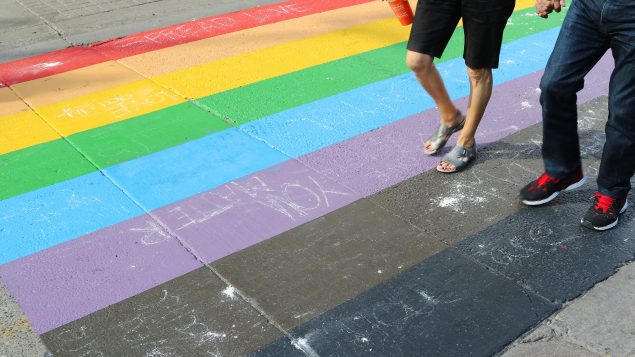 People walk on a Pride flag crosswalk in Calgary on Aug. 18, 2019. The LGBTQ rainbow flag was defaced with a violent message that was later covered with fresh paint and and positive messages written in chalk. (THE CANADIAN PRESS/Dave Chidley)

And what of the emotional scars?

The general public got a slight taste of them earlier this year when activist Sarah Hegazi was found dead in her Toronto apartment of an apparent suicide at the age of 30. Her crime: waving a rainbow flag at a concert in Cairo by the Lebanese band Mashrou’Leila, whose lead singer Hamed Sinno is openly gay. 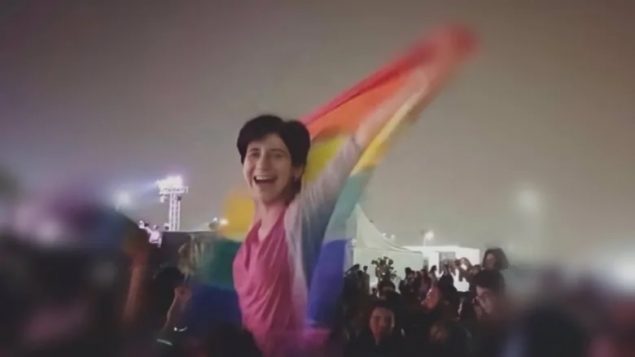 A friend captured a photo of Sarah Hegazi hoisting a rainbow flag at a concert in Cairo in 2017. She was arrested and tortured by the Egyptian authorities not long after. She was found dead in her Toronto apartment in June–from an apparent suicide. (Amr Magdi/Twitter)

“Although the survey data cannot be used to establish causality between experiences of victimization and mental health, reports of poor or fair mental health were almost three times higher among sexual minority Canadians (32%) than heterosexual Canadians (11%) in 2018. Sexual minority Canadians (40%) were also almost three times more likely to report having seriously contemplated suicide at some point in their lives than heterosexual Canadians (15%),” the study says.

Moreover, according to the study:

“In 2018, almost 3 in 10 (29%) sexual minority victims reported that they had used drugs or alcohol in the previous 12 months to cope with their lifetime experiences of abuse or violence, almost triple the proportion of heterosexual victims (10%).

“In general, other health-risk behaviours such as binge drinking, non-medicinal cannabis use and non-prescribed drug use were also more prevalent among sexual minority than heterosexual Canadians.”

The survey did not include assaults committed by someone who was an intimate partner.

The study is the latest in a series connected to Statistics Canada’s Centre for Gender, Diversity and Inclusion Statistics, which was created to support the development of evidence-based policies and programs by monitoring changes and reporting on gender, diversity and inclusion issues.

With files from The Canadian Press, Statistics Canada