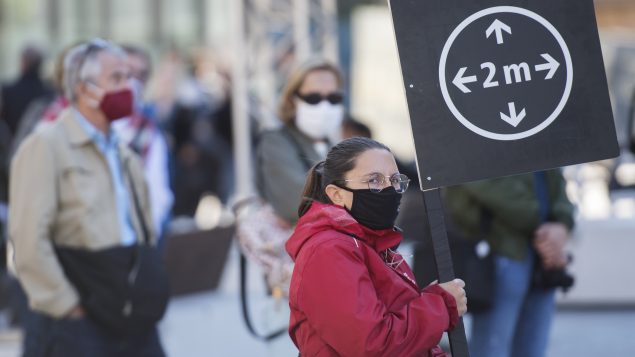 A woman holds up a sign encouraging people to stay two metres apart during an outdoor event in Montreal, Sunday, Sept. 20, 2020, as the COVID-19 pandemic continues in Canada and around the world. (Graham Hughes/THE CANADIAN PRESS)

Authorities in Quebec are urging residents of Montreal and the provincial capital of Quebec City to limit family gatherings and other social activities as the province recorded 462 new cases of COVID-19 on Sunday, bringing back the number of infections to the levels last seen in late May.

The number of hospitalizations has also started to slowly creep up from 124 last week to 138 as of Sunday, prompting the provincial government to put Montreal, Quebec City and the Chaudière-Appalaches region south of the provincial capital under “moderate alert.”

“Unfortunately, the contagion is amplified in three regions,” Health Minister Christian Dube said at a press conference on Sunday. “And our capacity to take care of the sick is diminishing.”

The so-called orange alert, the second-highest level under the province’s colour-coded COVID-19 alert system, means that indoor private gatherings in the province’s two largest cities and in the Chaudière-Appalaches are now limited to six people, down from 10. 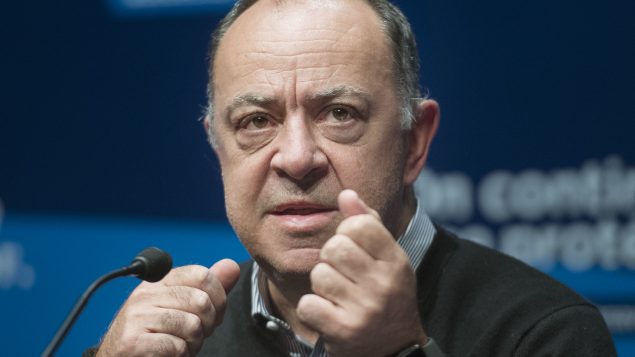 Quebec Health Minister Christian Dube speaks during a news conference in Montreal, Sunday, Sept. 20, 2020, where they provided an update on the COVID-19 pandemic in the province. (Graham Hughes/THE CANADIAN PRESS)

However, in settings where people remain seated at safe distances, such as movie theatres and music venues, the limit is still 250.

The new rules also place new restrictions on bars and restaurants, Dube said. Only six people will be allowed to be seated at one table in restaurants (down from 10) and bars’ last call will now be 11 p.m., with a closing time of midnight.

The government is expected to unveil more details of the new rules on Monday.

Since the start of the pandemic, there have been 67,542 confirmed cases and 5,802 people have died in Quebec, accounting for nearly half of Canada’s total COVID-19 cases and deaths.