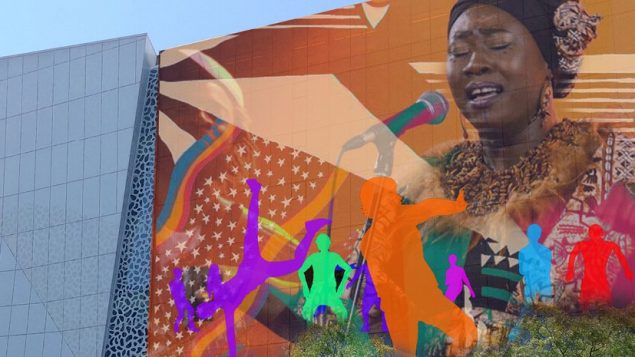 The portrait of Malian singer Djely Tapa is seen on the facade of a downtown Montreal building as part of "The Faces of Nuits d’Afrique", an interactive multimedia project launched in August 2020 before the fall edition of the 34th Festival International Nuits d’Afrique. (Crédits Photo : Jérôme Delapierre/Les Productions Nuits d'Afrique)

Montreal’s Indian summer is African this year. And it lasts 34 days

One Montreal festival I try not to miss each July is the Festival International Nuits d’Afrique (FINA). The festival re-invented itself this year to survive the pandemic and will be celebrating its 34th anniversary with live shows and a lineup of local artists showing their latest creations.

FINA has always been generous, accessible and festive, and this human warmth is greatly needed after the bizarre, festival-less summer we had in 2020. Each year, the outdoor African celebration is the opportunity to reunite with the global family of the African diaspora, and to discover an impressive wealth of music genres. 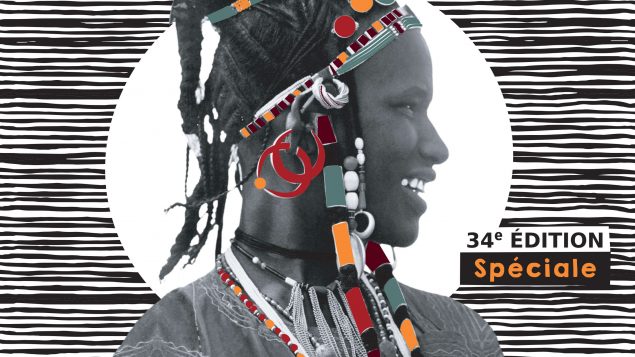 Of course, there won’t be any international artist traveling into Montreal for this unusual 34th edition. But FINA’s Executive Director Suzanne Rousseau — who has been at the helm of the festival since its inception — said she is not too disappointed. Actually, she is looking forward to discovering the brand new creations of her ‘protégés’, local bands that she has been following over the years and who were included in this year’s programming.

“We have programmed local artists that have reached a world-class level. Many of them have created more than usual this winter, and haven’t had an opportunity yet to show their work in a live performance.”Suzanne Rousseau, Executive Director, Festival International Nuits d’Afrique (FINA)
‘We have prepared an autumn edition to bring the colors of Africa, the Caribbean and Latin America. It is like bringing the summer into the fall.”Suzanne Rousseau

From September 27 to October 31, 2020, Montrealers will finally have the opportunity to enjoy 25 indoor concerts — provided the Quebec government doesn’t change the rules for cultural presenters because of a new COVID-19 outbreak.

Those who were not able to come to Montreal, or who didn’t get their tickets on time will be able to watch the live shows from home. Every Thursday night during the month of October, two performances will be webcast for free on the festival’s Facebook page. Each webcast will last about 50 minutes — which is much more than what most presenters usually offer.

Below is a sample of some of the best Montreal artists whose musical influences draw from African, Caribbean, and Latin American roots. Their music reflects the image of Montreal : a mixed identity where everything blends together nicely. To have a general idea about the programming, it is possible to listen to the digital compilation of artists that will be part of the 34th Festival International Nuits d’Afrique.

Opening the festival on Sept. 27 is Haiti-born Wesli, who has been described by international media as “Quebec’s Haitian star” and one “ambassador of Haitian music”. Coming from a humble background, he has devoted his life to exploring music, rhythms and instruments of Haiti’s African and French heritage in voodoo, rara and troubadour folklores, mixing them with Afro Beat, funk and hip hop.

Mateo, the new revelation of world music according to ICI Musique — one of Radio-Canada’s radio programs — will take to the stage a few days after Wesli. Established in Montreal after leaving his native Colombia on his own at age 19, this young, inspired artist is influenced by progressive rock, salsa and Colombian music. He also acts as a Lights Designer and Stage Designer for Dance companies.

Also from Colombia, Gypsy Kumbia Orchestra (GKO) will present its fans with a brand new theatrical performance. This special creation is the result of a partnership with Patrick Leonard, artistic director of Montreal circus company “Les Sept Doigts De La Main” (The Seven Fingers Of The Hand).

The premiere was supposed to happen last spring, along with the release of a documentary film about the band’s tour in Colombia. Finally, GKO will show its new creation for the first time at the Nuits d’Afrique festival.

Celebrating 15 years of musical journeys across the world’s stages, the multilingual hip hop collective Nomadic Massive is back in Montreal after years of hiatus. Its members rap in French, English, Haitian Creole, Algerian Arabic and Spanish. One of its founders is now established in São Paulo, Brazil, which is a hotspot of creativity. Their sound is definitely urban, with social commentary that begs to be heard.

Originally from Senegal, Zal Sissokho has been exploring all the 21 chords of his kora over the last decades. He has recorded three albums with Nuits d’Afrique records, composed soundtracks for the Cirque du Soleil and for films, and collaborated with many artists. He also tours abroad, and enjoys wide recognition in Brazil.

His latest album “Kora Flamenca”, which features flamenco guitarist Caroline Planté, was released last February, just before the pandemic hit Canada. His concert at the gorgeous Gesú church in late October is poised to be a high point of the festival.

It all started in a tropical club

Africans are known for their hospitality, and the Nuits d’Afrique festival has its own home in Montreal to welcome music (and dance) lovers : the legendary Club Balattou. Le Balattou was founded by Lamine Touré, a Guinean dancer and choreographer who bought a former strip club on Montreal’s “Main” (St-Laurent Boulevard) and turned it into Canada’s very first tropical bar. Suzanne Rousseau was already his associate at the time, making sure that all things would run smoothly.

“Balattou” stands for ‘ball for everyone’ — everyone gets to come in and dance. This is where a majority of FINA shows will happen this year. And it makes sense, because this is where the festival was born, back in 1987. 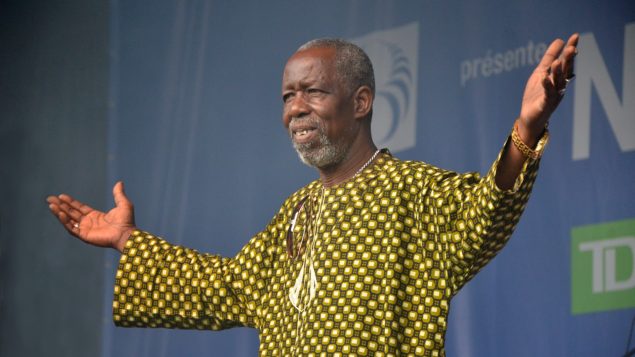 In 2019 the founder of Nuits d’Afrique was awarded the Order of Canada for his contribution to the diversity of the Canadian culture.

“Lamine Touré has devoted his life, his time and his talent to promoting African, Caribbean and Latin American cultures and music in Canada. The founder of the popular Club Balattou and the world-renowned Festival International Nuits d’Afrique, he created a mosaic of languages and traditions that reflect Canada’s multicultural tapestry, one dance step and one rhythm at a time. Through the creation of an award celebrating world music, he is also supporting the careers of musicians and artists—particularly emerging talent—from Canada and elsewhere.” Lise Payette, Governor General of Canada 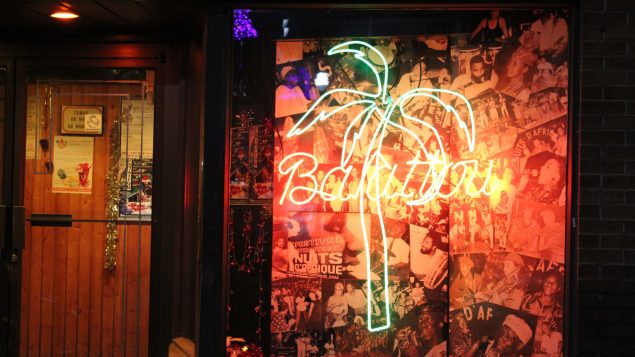 Since 1985, generations of Montrealers have been seeking a respite from the icy winter nights at the “Club Balattou”, simply called “Le Balattou” by locals. (Photo : Courtesy of Les Productions Nuits d’Afrique)

If you ever go to Le Balattou, check out the wall of mirrors facing the small stage. The decor has little changed since dancers  — women, with little clothes on — were wiggling their hips on this stage. Remember that here, many famous African stars have performed for the first time in Canada. Among them, Baaba Maal from Senegal, the late Papa Wemba from Congo (RDC), or the Mahotella Queens from South Africa.

A launchpad for a new generation of musicians

Twenty years after opening his club to African musicians — who were unknown in Canada — in the late 1980s, Lamine Touré reached out to local artists and offered them to participate in a music contest called the Syli d’Or.

Every winter since 2007, little known artists and bands have been presenting their work in front of an audience that acts as a jury and votes for the three best performances of the season. After a successful experience at the Balattou, several artists would perform at FINA. El Son sono, for instance, won the Syli d’or in 2018 and is playing the FINA this year.

The Montreal artist whose career is geting know nationally is the Malian singer Djely Tapa. Her first album, newly released on the Disques Nuits d’Afrique label, won a JUNO Award this year. She was also named 2019-2020 Radio-Canada Revelation in world music.

Finally, FINA’s latest  innovation to promote artists on the street level is Faces of Nuits d’Afrique, an interactive multimedia experience designed by the digital visual artist Jérôme Delapierre. The image of four musicians — including  Djely Tapa — is projected onto buildings of Montreal’s Entertainment District. People can dance to the music on a little stage set up in the street. As they dance, they are being filmed by a small set of cameras, and their silhouette is projected onto a giant screen in shadow puppet form. The two simultaneous projections create a new kind of dialogue between the artists and the audience in a period of social distancing.

Jerôme Delapierre, the digital artist who created this multimedia installation, describes his creative process in the video below (only in French).